Honda Foundation Announces The Honda Prize For The Year 2005 Will be Awarded To Dr. Raj Reddy, Professor of Computer Science and Robotics, Carnegie Mellon University, U.S.A.

Honda Foundation (Founder: Soichiro Honda and Benjiro Honda, President: Hiromori Kawashima) announced it has decided to confer the Honda Prize for the year 2005 on Dr. Raj Reddy (68), the Mozah Bint Nasser University Professor of Computer Science and Robotics at Carnegie Mellon University, U.S.A. Among the 26 laureates of the Honda Prize including himself, Dr. Reddy will be the sixth American and the first Robotics scientist to receive the prize.

Dr. Reddy achieved in computer science and robotics, particularly as a world leader in the study of human-computer interaction, artificial intelligence, and speech and visual recognition by machine through a number of distinguished, successful projects.

His career as an educator has also been impressive: As the founding director of the renowned Robotics Institute at Carnegie Mellon University, he has vigorously promoted and enhanced the international robotics community by accepting and educating as many researchers from companies and universities overseas. As a result, robotics has become one of the most promising technological areas for today's industry as well as future society in the sense that it helps create more harmonious relationships between man and nature through the involvement of intelligent machines.

Honda Foundation believes these Dr. Reddy's achievements accord to the vision of our advocating Eco-Technology: a genuine technology in harmony with the entire environment surrounding human activities. As the 26th laureate of the Honda Prize, Dr. Reddy will be awarded an extra prize of 10 million yen. The award ceremony will be held at Hotel Okura, Tokyo, Japan on Friday, November 25, 2005.

Eco-Technology is the term coined to denote the harmonious development of ecology and technology. It is a technological concept for future society which values technological advances in harmony with the environment surrounding human activities, rather than traditional pursuit and use of technology solely for efficiency and profit. 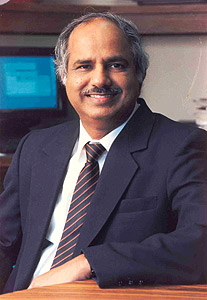 Selected contributions available on the Web