The simply-structured 2-stroke engines were highly portable and 360-degree-inclinable, ideally suited - and popular - for powering handheld power equipment, but were not fuel efficient nor environmentally friendly. Honda developed the compact, lightweight, and 360-degree-inclinable 4-stroke GX22/31 engine, in the aim of producing a 4-stroke engine “as easy to use as a 2-stroke.”

The GX22/31 was a high-environmental performance engine, surpassing U.S. Environmental Protection Agency (EPA) and California Air Resources Board (CARB) regulations - the most stringent at the time - and achieving half the actual fuel consumption of a 2-stroke engine.

The GX25 was developed to be “the world’s lightest,” “360-degree-inclinable” engine with “outstanding environmental performance,” and was not only smaller and lighter than its predecessor, but realized class-leading fuel economy and low-oil consumption.

With the GX35 (announced in 2003), the ultra-small 4-stroke engine series has well-balanced performance characteristics, including low vibration and noise, making it an ideal power unit for handheld power equipment such as brush cutters and power sprayers. 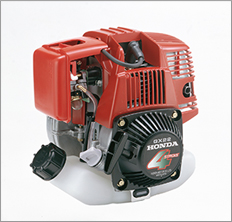 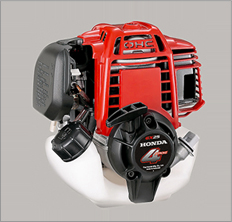 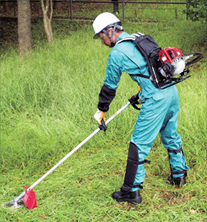 Honda developed the “Rotary Slinger Pumping Lubrication System” to realize a 360-degree-inclinable engine. The oil lubrication system is unaffected by the engine’s inclination, allowing for stable engine operation and storage at any inclination - a prerequisite for handheld power equipment engines. Honda’s unique technologies made this engine the world’s first* 4-stroke engine for handheld power equipment.

The oil tank is cylindrically-shaped with a rotary slinger at its center to ensure engine oil is delivered throughout the engine. Oil can be agitated at any inclination, generating oil mist by operating the engine. The oil mist is circulated by pulsation of the crankcase and negative pressure generated at the reed valve.

Oil mist generated in the oil tank is pulled into the crankcase - negatively-pressurized by the crankshaft - and after lubricating the pistons and cylinders, is expelled to the valve chamber where it condensates and is returned to the oil tank.

With dry sump lubrication, oil is supplied and recovered using an oil pump - the simple and lightweight rotary slinger pumping lubrication system requires only one reed valve to circulate the engine oil.

This system, developed for the GX22/31, was incorporated into the GX25, evolving into an even more simpler, more compact, lightweight, and 360-degree-inclinable engine.

The GX22 incorporated a single-cylindercam-lobe OHV and uni-block cylinder structure to realize its compact, lightweight design, but with the GX25, further reduction in size and weight was achieved with the help of the world’s smallest* oil-immersed timing belt OHC configuration, allowing the oil and valve chambers to be combined. The newly-developed oil-immersed timing belt was 1/3 the size of a conventional automobile timing belt (comparing the drive pulley diameter) while providing sufficient reliability under extreme revving, flexing and high-temperature conditions. 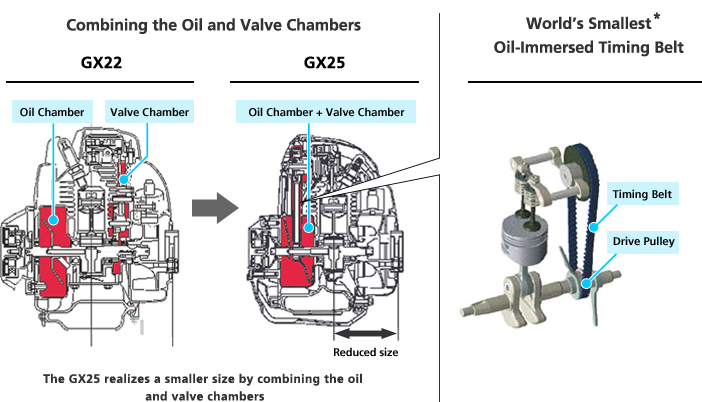