One day in 1980, Toru Arisawa, who was then in charge of car advertising in the Head Office Sales Promotion (SP) Division, had two visitors from the R&D Center. The development staffers had come to beg for his help. 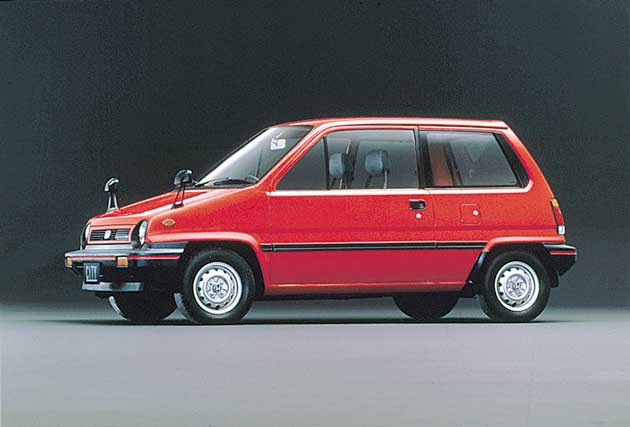 Using a concept that defied common sense, the City created a new market for itself.

Arisawa, never one to turn away a desperate plea, agreed to accompany them back to the Wako R&D Center. There he was taken to the modeling studio, where security was tight to prevent the leaking of confidential information.

Stepping inside, the moment Arisawa saw that full-scale clay model at rest immediately to his right, he was awestruck - even dumbfounded. It was an unconventional, one-of-a-kind clay model dubbed the SA-7 by its developers. It was the City, the powerful creation of young forces at the R&D Center.

Development work for the City began in April 1978, when development staff were ordered to "produce the ultimate fuel-economy car for the 1980s."

Domestic demand was low at the time, although Japan had already superseded the United States as the world’s number-one producer of cars. Moreover, with the start of voluntary restraints on automobile exports to the U.S., it seemed the problems were only just starting for Japan’s automotive industry.

Five key concepts were employed in the development of the City, a model that was intended to open a whole new category in unconventional "light vehicles." They were:

1. To create new demand beyond that of the existing market.

2. Design a car that meets the public demand for resource and energy conservation, yet one that is especially aimed at young people as a fun, one-of-a-kind car.

3. Deliver a car with excellent base performance to satisfy the users’ quest for the best. In addition, make sure it presents a new kind of lifestyle.

4. Produce a car that young users - especially those who consider cars a daily necessity - will want to call their own.

5. Design a car that fits Honda’s image as a creative car manufacturer. It must have a number of advanced features, and should have international appeal.

The young S·E·D engineers, with these concepts in mind and with an average age of just 27 worked together as one to create the City. It was the car they wanted for themselves; one developed to reflect their own ideas and lifestyles.

What the development staff desperately wanted from Arisawa was support: In order to prevent Honda Motor’s top executives from altering the shape of the SA-7 clay model, Arisawa had to protect it via his position as a sales promoter.

Arisawa, who was from the start blown away by the SA-7, was confident that the car would stand as a piece of sound, solid hardware. He also believed it reflected a positive return to Honda’s roots.

Arisawa promised the team he would help. Filled with the desire to send this car out to the world at all costs, he said, "I won’t fail you. I’ll come up with something." He was also determined to develop advertising and promotional campaigns that were unlike any other; ones that reflected the car’s unconventional nature. He immediately began developing specific images for use in advertising the new car.

His first project was to create a report for presentation of the SA-7 to the entire company, especially the upper management. Rather than emphasize product features in the conventional way, however, he attempted to appeal to people’s senses using a freely styled form of expression. He then wrote down an outpouring of key phrases and ideas that conveyed his impression of the SA-7’s powerful impact. These concepts were then passed onto younger staff members in the Sales Promotion Division, where they could be expanded and refined. Important key words and catch phrases such as "Tall Boy," "Light Vehicle," and "Pocketeria," which would later play a key role in promotional development, were issued at this stage. The SA-7’s image was taking shape.

Arisawa’s sketches as he worked to create images for advertising and promotion, immediately after experiencing the full impact of the SA-7 (City)

Thus, the Wishes of the Young were Accepted,and the SA-7 was Given the Green Light 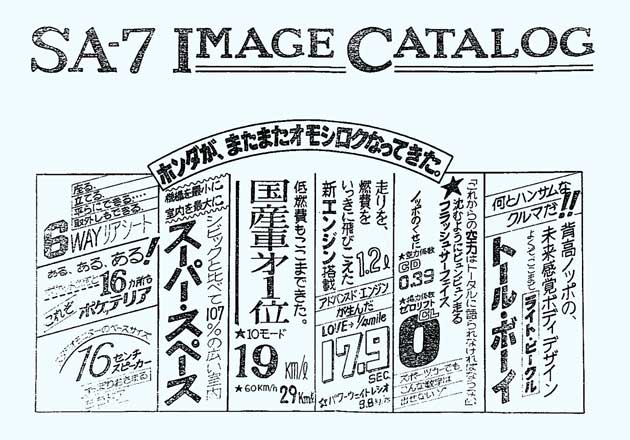 Arisawa appealed to the decision-makers with the words, "The SA-7 is the product of our young staffers, who have broken with established concepts. We will develop our advertising and promotional activities with presentations befitting such a concept. Please leave it to the young generation to take care of the SA-7."

Reviewers of the appeal were evenly split between those who had young minds and those who made decisions based on depth of experience.

The SA-7, though, had been developed by young people who were not afraid to go against the grain or stand up to friction within the organization. It was their overwhelming enthusiasm that led to the on-the-spot decision to go ahead with the project exactly as they wanted. The concept drawn up by Arisawa and others was indeed going to become a reality. There was, of course, great generosity on the part of the top executives who authorized the concept.

Facing a New Challenge with Madness and the Centipede Dance

Full-scale work was now underway on the creation of product brochures and catalogues featuring the new car. By then, the developers" product name, SA-7, already had been replaced with the product name "City," which Arisawa had wanted for the car. The staffers were quick to finish the remainder of the catalogue containing a basic concept for the subsequent campaigns in advertising and promotion.

The logo chosen for the City featured the name in tall, capital letters, reflecting the image of the Tall Boy driving through the city between buildings, arranged with silhouettes of buildings behind them. The staffers also came up with the slogan, "The City is full of news," enthusiastically conveying the product’s newsworthiness. The phrase actually had two meanings, one of which was modeled after the youth-oriented fashion district of Harajuku, then the location for Honda’s head office. The City was indeed a source of fashion and news.

For the product image to be used in advertising, the Sales Promotion staff attempted something completely different. They tried to create original music for young people, paying extra attention to rhythm in order to build a sense of pace and anticipation for the product. To that end, the production staff flew to New York in the hope of gathering musicians to create a City band. It was then that someone passed along the information that there was an English band that played a unique form of ska music, and that their dance style also was quite unique. The band was virtually unknown to Japanese music fans, but the staff decided to employ them anyway, attracted by their oddity and novelty. Upper management, however, simply would not hear of it.

Although some found the project interesting, many in upper management expressed their bewilderment, saying, "Young man, tell me you are not serious!" Proposal after proposal was turned down.

The executive in charge was reluctant to see the project demonstrated for the third time, remarking, "I don’t need to see this if nothing has changed." Arisawa, however, refused to back down.

"Young people tell us they like it," said an impassioned Arisawa. "Old people say they don’t. But as long as we have 20 to 30 percent of the young with us, the goals of this car will be met. Please let us go ahead by using the youthful corporate image that Honda is known and respected for."

Finally, the executive replied, "All right, you’ve won my vote. Go ahead with the project. I will take the responsibility."

Arisawa simply could not hold back his tears of joy when he heard those words. "Thank you, sir," he replied, "You can be sure that I’ll do my best."

After winning the board’s approval, Arisawa and his staff invited the band Madness to Japan. The recording, photo sessions, and commercial filming were completed in rapid succession. In fact, production took only two-and-a-half days during the band’s four-day stay in Japan. With the completion of the scene featuring the Centipede Dance to the music of the now-famous "Honda, Honda, Honda" tune, Arisawa excitedly thought, "Yes! Yes!" However, Honda Motor was currently having a rough time increasing its yearly sales of cars. The number just would not exceed 300,000. This contributed to the gloomy mood both within and outside the company. Accordingly, Arisawa’s hopes for the City also included his desire to cheer everybody up with the "Honda, Honda" tune.

The music of Madness was well received at the national meeting of Honda dealership managers, which was held a few days afterward. Greatly enthused by the reaction, Arisawa said, "If Kato-chan and Ken-chan of the Drifters [a nationally televised popular comedy show] were to pick up this dance on their show, the nation would be in an uproar!"

Little did Arisawa realize then that that was exactly what would happen. Soon the commercial began airing, and the "Honda, Honda, Honda" melody, along with the Centipede Dance, became a huge hit throughout Japan, popping up at school festivals and parties. The sales-promotion team’s goal of the City being newsworthy and talked about was met with complete, 100-percent satisfaction.

The presentation party held in November 1981 also was decidedly unconventional, in keeping with the City’s character. The stage was set in the high-rise district of the "super city" Shinjuku, known as the other center of Tokyo. All board members, including President Kiyoshi Kawashima, wore jackets over casual outfits in place of rigid business suits. Laser beams and new music were used to create a showy, glitzy presentation. Catalogues were distributed in bags arranged to look like bags of cement.

Honda developed a mass media approach that incorporated other media in addition to TV and radio advertising. The new attempts would include issuing the special magazine, City Press, running special programs on the radio and hanging enormous posters at train stations. In addition, a variety of City novelty goods went on sale. Honda even took to the road with a 12-ton truck called the Moving Studio, which was packed with City and Moto-Compo display products to support the dealerships" motor shows.

The City had a unique style dubbed "Tall Boy," which had a number of very creative features. The newly developed Combax engine offered excellent dynamic performance and low gas consumption. It also was sold with Moto-compo, a matching 50-cc motorcycle that went on sale with the City. This was truly a unique package, providing an endless source of news and discussion.

Just as powerful and unconventional as the product itself were the sales-promotion activities. From the moment it was introduced, the powerful combination of product and image won enormous support for the City, especially among the young.

Nearly 150,000 City cars were sold in the two years after its November 1981 launch, with monthly sales hitting a peak of 16,000 units. The City continued making news when the later high-mileage E, Hyper Turbo, Body Sonic, and High Roof models were introduced.

The City indeed made quite an impact on the public in the first half of the 1980s, garnering numerous industry awards and mass media honors. The sales-promotion specialists were also acknowledged for their work in design, and caused a sensation throughout the advertising industry.

The introduction of a shorter, second-generation City in October 1986 signaled the completion of the first-generation City’s mission. However, the City’s Tall Boy concept can still be found in Honda’s mainstream products. Moreover, the sales-promotions activities that grew out of the City continued to create fresh, new public sensations, as seen in the Bolero campaign for the second-generation Prelude, and Wonderful World for the Wonder Civic.