The innovative multi-chamber front passenger airbag technology in the all-new 2021 Acura TLX sport sedan has been awarded as a 2020 “Best of What’s New” for 2020 by Popular Science and was further distinguished as their “Grand Award” winner among all of the year’s automotive entrants. Representing a major leap forward in airbag design, it is the world’s first passenger front airbag intended to address the recently recognized issue of severe brain trauma associated with angled frontal collisions. The all-new Acura MDX three-row luxury SUV, set to go on sale early next year, will also feature this award-winning technology as standard equipment. 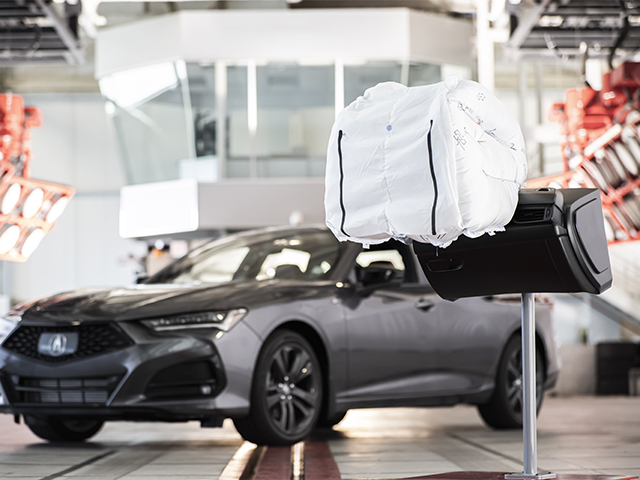 The new airbag is designed to help reduce head and neck injuries by better controlling the front passenger’s head in certain types of crashes. The airbag can better manage lateral collision forces that may cause an occupant’s head to rotate severely at high velocity, or to slide off a conventional passenger airbag, increasing the chance of serious injury. Compared to a single inflatable chamber of conventional airbag systems, the new passenger airbag consists of four major components: three inflated compartments (a center chamber and two outward-projecting side chambers that create a wide base across the dash) and an uninflated “sail panel” that stretches between the two side chambers. The “sail panel” is designed to initially catch and decelerate the occupant’s head with less force prior to contacting the lower chamber, while directing it inward between the two inflated chambers to cradle and help protect the front seat passenger’s head.

Co-developed by Honda R&D Americas and safety systems supplier Autoliv, this groundbreaking new airbag design is now being offered to other automakers to enhance the safety performance of their future products.

Full details on Acura’s next-generation passenger front airbag and other safety innovations, as featured in the all-new 2021 TLX, can be found here: acura.us/safetyinnovation.

“The ‘Best of What’s New’ awards showcase the year’s greatest feats of human ingenuity,” says Popular Science Editor-in-Chief Corinne Iozzio. “Even in a year like 2020, innovation has helped us glimpse a future that’s safer, smarter, and more enjoyable than we might have thought possible. This collection, which includes everything from a new generation of Mars explorers to ultra-hygienic print-to-order eyeshadows, is full of items we’re proud to call the ‘Best of What’s New.”

Every year, Popular Science reviews thousands of new products and innovations, selecting the top 100 winners across 10 categories. To be selected as a “Best of What’s New” winner, a product or technology must represent a significant step forward in its category. Most recently, Acura’s True Touchpad Interface™, using absolute positioning to deliver a more intuitive and driver-friendly digital experience, was recognized by Popular Science as a "Best of What's New" technology for 2018.

About Acura
Acura is a leading automotive nameplate that delivers Precision Crafted Performance – a commitment to expressive styling, high performance and innovative engineering, all built on a foundation of quality and reliability. The Acura lineup features five distinctive models – the ILX and TLX sport sedans, the RDX and MDX sport-utility vehicles and the next-generation, electrified NSX supercar. All Acura models sold in North America for the 2021 model year are made in the U.S., using domestic and globally sourced parts.