TORRANCE, CA, U.S.A., December 23, 2014 - Honda’s 2015 Rose Parade float entry, Building Dreams of Friendship, will lead the 126th Rose Parade presented by Honda. The float celebrates the friendship shared by the United States and Japan through the TOMODACHI Initiative, and pays tribute to the resilience of the people of Tohoku, Japan. The float also seeks to highlight the ongoing reconstruction effort in the regions affected by the Great East Japan Earthquake and tsunami of 2011, and pays tribute to the role played by the United States military in the humanitarian response. Themed “Inspiring Stories,” the Rose Parade will take place Thurs., Jan. 1, 2015. 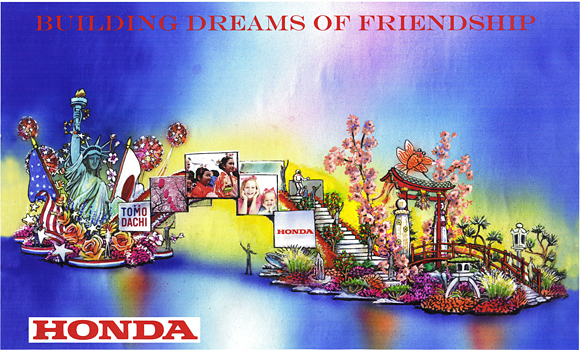 Born out of the relief effort following the Great East Japan Earthquake and tsunami of 2011, the TOMODACHI Initiative (TOMODACHI is Japanese for “friend”) was created by the United States and Japan to strengthen the bonds of friendship and leadership for future generations of Japanese and American youth. As part of this initiative, Honda will bring 20 high school students from Tohoku, one of the regions most impacted by the 2011 disaster, to participate in the Rose Parade with Honda’s float and perform a special song composed for the Parade by six-time Grammy Award winner Daniel Ho.

While in the United States for two weeks, the students will participate in several cultural activities and programs. The students will perform at a Japanese American museum and other cultural centers, participate in a project with Honda Associates to assemble disaster relief kits for the American Red Cross, conduct a homestay visit with Honda Associate families and community members, and meet with a group of their peers at a high school in Torrance, CA.

The Tohoku students, many of whom were directly impacted by the twin disasters, will be joined on the float by several additional special guests, including representatives from four branches of the United States military who were among the first to arrive in the region to provide humanitarian aid and support following the devastating earthquake and tsunami.

“The story of the people of the affected regions of Japan, as well as the United States servicemen and servicewomen who helped them following the earthquake and tsunami, is truly inspiring,” said Steve Morikawa, Assistant Vice President, American Honda Corporate Community Relations. “Honda is proud to celebrate the friendship of our two countries and recognize the United States military for its role in the relief effort.”

Honda’s 2015 Rose Parade float symbolically joins Japan and the United States in friendship and unity. Each section includes iconic imagery, including the Statue of Liberty and a torii, or traditional Japanese gate, and the flags of the two nations. Each side is highlighted by flowers emblematic of the two nations, such as the rose, the national flower of the United States, and the sakura, or cherry blossom, of Japan.

The cherry blossom represented on the float is the kokunodate cherry blossom of Tohoku, and is one of many regional elements represented. Other touches include Tohoku cherries, rice ready for harvest, Tanabata Festival decorations, and a tuna, which represents the importance of fishing to the Tohoku community. All of the regional elements featured on the float were suggested by the students.

To symbolize the bond between the two nations, two sections of the float are joined by a bridge adorned with 10 video screens broadcasting messages to the crowd along the Parade route. Elements of the float will be decorated by the students in the days leading up to the Parade.

For the fifth straight year, Honda’s float will be propelled by a specially configured hybrid, low-emission engine designed to help the float function more efficiently. The Tournament’s theme banner float will also be Honda-powered.

Honda and the Tournament of Roses

Honda first collaborated with the Tournament of Roses in 1961 to provide two-wheeled vehicles for 1962 Parade operations. Honda has been a float participant in the Rose Parade since 1977, and has provided the official Tournament of Roses vehicle since 1994. Honda continues to supply two-wheeled vehicles and also provides side-by-side (multi-utility) vehicles for Parade operations.

As presenting sponsor, the Honda float is the first in the Parade and showcases the theme. As a result, it will not be considered a commercial entry and will not compete during the judging process. Prior to becoming presenting sponsor in 2011, Honda floats won awards in 15 of the previous 16 years.

“The 2015 theme allows us to reflect on and appreciate the many people around us who elevate the human spirit by who they are, what they have done and what they continue to do,” said Tournament of Roses President Richard Chinen. “‘Building Dreams of Friendship’ embodies our theme perfectly.”

About the Pasadena Tournament of Roses

The Pasadena Tournament of Roses is a volunteer organization that annually hosts the Rose Parade, the Rose Bowl Game and a variety of associated events. The Tournament's 935 volunteer members act as ambassadors of the organization within the community and serve on one of 31 committees that ensure the success of the parade and game. Collectively, they contribute upwards of 80,000 hours of manpower each year. The 126th Rose Parade presented by Honda and themed "Inspiring Stories," will take place Thursday, Jan. 1, 2015, followed by the College Football Playoff Semifinal at the Rose Bowl Game presented by Northwestern Mutual. For additional information on the Tournament of Roses please visit the official website at www.tournamentofroses.com.