MARYSVILLE, Ohio, U.S.A., December 5, 2012 - Twenty-five years after the first U.S.-made Honda automobile was exported to overseas markets, associates at the company's Marysville Auto Plant today marked production of the 1 millionth Honda automobile to be exported from the U.S. The silver 2013 Honda Accord EX-L Sedan will be shipped to South Korea. 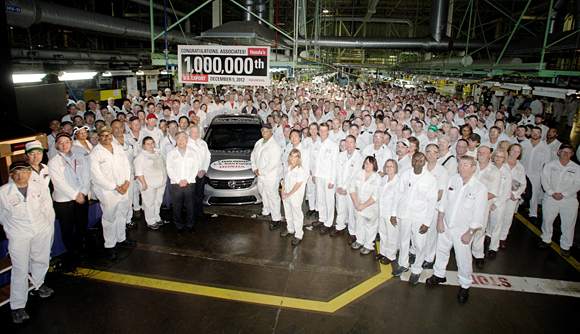 Within two years, Honda will become a "net exporter" of automobiles from North America - exporting more vehicles built in its auto plants in North America than it imports from Japan - as these local production operations take on a larger responsibility for the introduction of global automobiles sold in multiple countries.

"Quality for the world, made in America, has been an important Honda commitment for the past 25 years," said Takanobu Ito, president & CEO of Honda Motor Co., Ltd., in a video message to the gathering. "In the coming years, we will take on the challenge of helping even more customers around the world enjoy Honda products made in the USA."

Since 1987, Honda has exported more than $22 billion worth of automobiles and components from the U.S. This includes its exports of finished vehicles as well as component parts sets from suppliers in the U.S. that are used to produce automobiles at Honda plants overseas.

The export milestone Accord Sedan that rolled off the assembly line in Marysville, Ohio, now embarks on a more than 8,000-mile journey across the United States to Port Hueneme in Southern California, and then across the Pacific Ocean to Seoul, South Korea, where the company recently began sales of its U.S.-made vehicles. Honda currently exports automobiles to more than 40 countries (Honda does not include shipments from the U.S. to Canada as exports), with total exports expected to reach nearly 100,000 Honda and Acura vehicles from the U.S. in 2012.

With an investment of more than $2.2 billion in its North American operations over the past two years, Honda will increase automobile production capacity in North America from the current 1.63 million to 1.92 million units per year in 2014. As a result, in the coming years, annual exports of Honda and Acura automobiles from the U.S. are expected to far surpass the company's previous single-year export record of 105,511 vehicles set in 1994.

Every Honda auto plant in North America builds cars and trucks for export to global markets, including operations in Ohio, Alabama and Indiana. Exported models include the Honda Civic, Accord, CR-V, Pilot, Odyssey, Crosstour and Ridgeline and the Acura ILX, TL, RDX and MDX. Further, many of the vehicles exported from the U.S. were designed and developed in the U.S. by Honda R&D Americas.

Honda currently exports automobiles to more than 40 countries from the U.S. through seven port facilities in three states:

The one million automobiles exported from America represents a value of $19 billion dollars since the first export to Taiwan in 1987. Further, the cumulative export of component parts sets is valued at more than $3.24 billion.

In addition to the export of automobiles and automobile parts, American Honda also exports power sports (ATVs) and power equipment products made at Honda's U.S. plants to overseas markets: 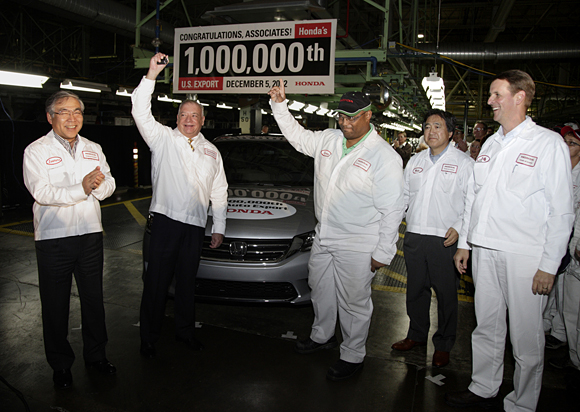 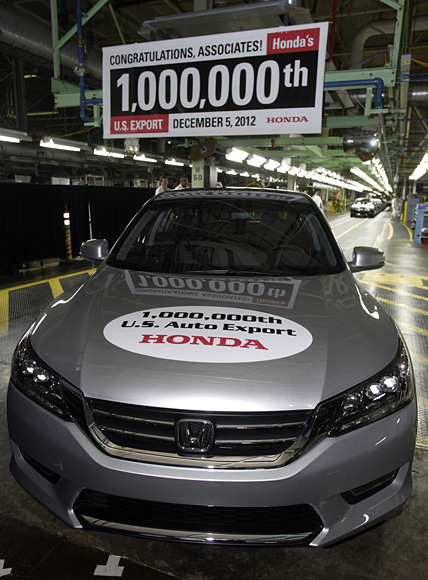