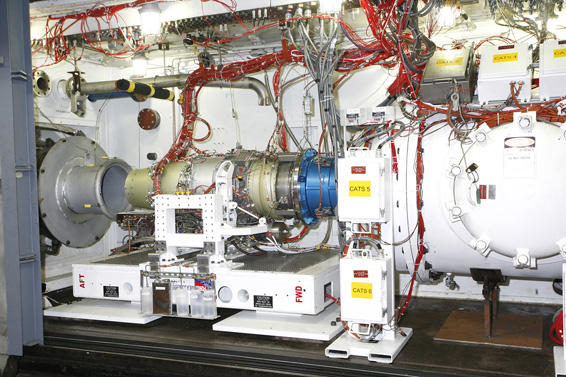 “This is a significant milestone and represents the transition from the design-definition phase to the test and certification phase of the HF120,” said Bill Dwyer, president of GE Honda Aero Engines. “Over the next several weeks, we will be mapping the engine performance and operability around the flight envelope while utilizing the full capability of the altitude test chamber.”

“The joint GE and Honda teams in Tokyo, Lynn, MA and Evendale, OH have worked for more than two years toward this milestone and deserve kudos for their extensive collaboration,” said Masahiko Izumi, executive vice president of GE Honda Aero Engines.

The HF120 engine has experienced one of the most extensive engine test programs prior to the official start of FAA certification testing.  To date, GE Honda Aero Engines has built and tested eight HF120 engine cores and 11 full engine demonstrators.  During testing, the engine exceeded its design goal of 2095 lbs thrust.

Thirteen HF120 development engines and two core builds will take part in the certification testing at six locations in the U.S. and Japan. Tests will include fan blade out, crosswind, stress and endurance testing. GE Honda also plans to test the engine on a flying testbed before flying on the customer certification aircraft.  By entry into service, the HF120 will have accumulated more than 15,000 cycles of ground and flight testing.

The GE Honda HF120 engine was launched in 2006 and selected to power Honda Aircraft’s advanced light jet, the HondaJet, and the Spectrum Aeronautical "Freedom" business jet.

Rated at 2,095 pounds of thrust, the HF120 engine succeeds Honda’s original HF118 prototype engine, which has accumulated more than 4,000 hours of testing on the ground and in-flight. GE and Honda redesigned the engine for higher thrust and new standards of performance in fuel efficiency, durability, and low noise and emissions.

The HF120 technologies include:

A key cost-of-ownership advantage of the HF120 will be the ability to operate at a best-in-class 5,000 hours between major overhauls. The advanced airfoil materials and coatings that GE and Honda are maturing for the engine’s high-pressure turbine section enable this capability.

In 2004, GE and Honda formed a 50/50 joint venture, called GE Honda Aero Engines, based in Cincinnati, Ohio. The joint company integrates the resources of GE and Honda Aero, Inc., a Honda subsidiary established to manage its aviation engine business.

GE Aviation, an operating unit of General Electric Company (NYSE: GE), is a world-leading provider of commercial and military jet engines and components as well as avionics, electric power, and mechanical systems for aircraft. GE Aviation also has a global service network to support these offerings. GE traces its beginnings to Thomas A. Edison, who established Edison Electric Light Company in 1878.