Accord Factory Performance Package Unveiled, 2003 Race Cars and New Concepts Set the Pace for Honda and Acura at 2002 SEMA

"The ideas and concepts displayed at SEMA explore new approaches to maximizing the potential built into every Honda and Acura platform," said Jim Roach, American Honda Vice President of the Parts Division. "People who drive and modify our cars understand that Honda and Acura products integrate an extra measure of performance into every vehicle as part of the company's design and engineering philosophy."

Six cars total debuted at SEMA for the Honda division. Designed by Honda R&D Americas, the 2003 Honda Accord Concept Coupe makes its world debut and features a 300-horsepower V-6 engine with a semi-manual six-speed transmission with paddle shifter, a complete aero package, wide body kit, race suspension and lightweight prototype parts. The Civic Si Concept accents the car's class leading potential for ultimate performance. Another Civic Si, modified by King Motorsports with Mugen aftermarket equipment, delivers intense performance designed for the street and the track. A third Civic Si, a pro drag racing car driven by Adam Saruwatari, made its world debut. The Honda Element on display showcases some of the accessories that will be available when Element goes on sale in December.

In addition, American Honda's racing contingency sponsorship plans for 2003 include continued support for Racers Against Street Racing (RASR) in various racing series including the Sports Car Club of America (SCCA) and National Hot Rod Association (NHRA). The contingency sponsorship program awards Honda and Acura racers from amateur to professional ranks that win races and show their support for RASR, a SEMA organization dedicated to promoting alternatives to street racing.

With the debut of the completely redesigned 2003 Honda Accord comes a new realm of possibilities for customization. Envisioned and customized by Honda, the 2003 Honda Accord Concept Coupe exemplifies a new direction for a platform that has traditionally been among the most popular in the industry to modify. Now with an available 240-horsepower V-6 engine and a six-speed manual transmission, the performance demeanor of the Accord has increased to a new level. The Accord Concept Coupe goes a few steps further and strives to integrate useful modifications that give it even more horsepower, lower curb weight, increase handling performance, and improve acceleration and braking to practically race-ready levels. 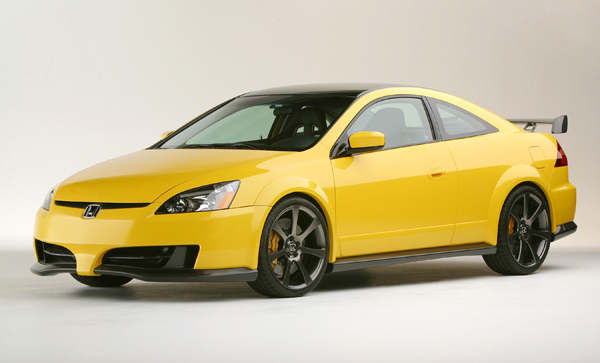 The 2003 Honda Civic Si Concept delivers hard-hitting power and showcases the adaptability of the Si to aerodynamic enhancements and other customization. Modified with a prototype GReddy turbocharger for street use, the Civic Si Concept produces 230-horsepower. Underneath, the Civic Si Concept employs a Honda-developed racing suspension with a widened track and ultra high-performance springs, shock absorbers, Brembo brakes, 18-inch wheels and more. The Honda CBR motorcycle red paint taps into Honda's championship-winning motorcycle racing heritage. Parts of the body that channel air for cooling and heat exhaustion are constructed of nickel carbon fiber. The interior houses carbon fiber race seats and a Mugen digital display replaces the traditional gauges with a multi-program LCD screen that can convey extensive engine information. An additional Mugen information center with an LCD screen mounted on the center of the instrument panel provides additional on-board diagnostics. 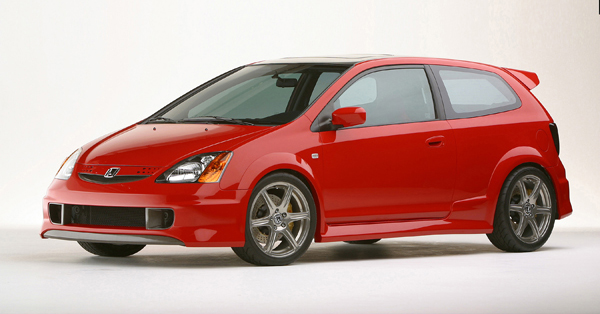 The 2003 Honda Accord Coupe can be equipped with a new Factory Performance (FP) suspension package that will be available in Spring 2003 through all Honda dealerships nationwide. The kit lowers the ride height of the Accord by approximately 1-inch and enhances overall handling performance with aggressively tuned shock absorbers, springs, and 17-inch wheels and tires. The dealer-installed FP package is available for the 2003 Accord V-6 Coupe on LX and EX trim levels with either manual or automatic transmissions. An MSRP for the FP suspension has not been announced yet. The 2003 Accord Coupe display car at SEMA features the FP package.

Accord Coupe Factory Performance components include: 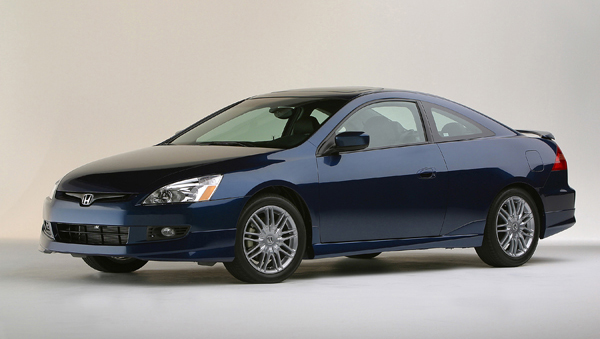 The 2003 Honda Element goes on sale in December 2002 and delivers an affordable, rugged and adaptable platform that incorporates the best traits of a pickup with a hard flat floor, an SUV with the rear enclosed area and a car with its responsive handling and good fuel economy. Starting around $16,000, the Element leaves room for extensive customization, and the display car at SEMA shows some of the new accessories available from Honda for this totally new segment of light truck. A 160-horsepower 2.4-liter i-VTEC 4-cylinder engine powers Element and it is available in 2WD or 4WD, automatic or manual transmissions. The interior can adapt to items as large as a 10-ft surfboard and the side cargo doors make loading big objects from the side easy. The standard urethane-coated utility floor is water and scratch resistant.

Overall, Element is rugged in all the right places. A 2003 Honda Ruckus, an all-new runabout scooter from Honda, is on display in the back of the SEMA Element. 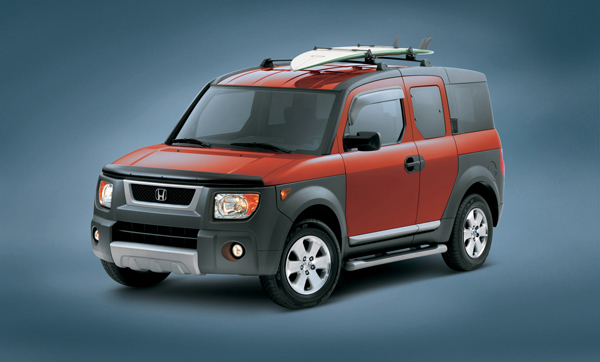 The 200-horsepower Acura RSX Type-S has quickly built a reputation as being one of the sleekest and most sought-after machines in its class. Acura is offering its first Factory Performance package for the RSX Type-S at dealerships nationwide beginning in early 2003. The Factory Performance package features track-tuned shocks and springs that lower the car by approximately one inch. The shocks and springs combined with lightweight aluminum alloy wheels, 17-inch high performance tires, slotted brake rotors and performance pads give the RSX Type-S razor sharp handling, reduced body roll, increased cornering grip and enhanced braking performance. A rear wing spoiler, an under-body spoiler kit and an interior trim package featuring a Factory Performance shift knob and badging also give the car an aggressive, high performance look. The kit will have an MSRP of $4,800, plus installation.

The RSX Type-S Factory Performance package will include:

In addition to an Acura RSX Type-S equipped with the newly-introduced Factory Performance package, Acura will feature two other models at SEMA; a supercharged CL Type-S with a six-speed manual transmission and a prototype aerodynamic body kit, and the new Real Time Racing Acura RSX Type-S that recently debuted in the Sports Car Club of America's SPEED World Challenge Touring Car Championship. 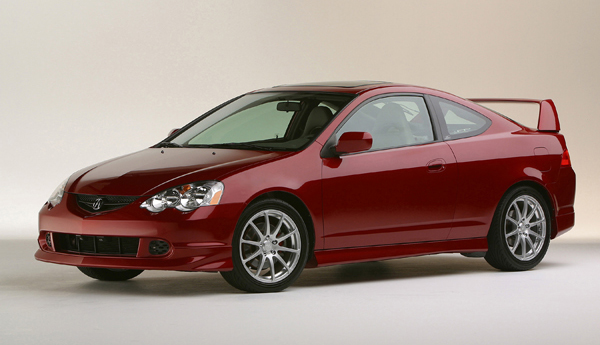 The all-new RealTime Racing (RTR) Acura RSX Type-S will be replacing one of the legendary Acura Integras the team has campaigned over the past five years to the most wins of any models ever in the Sports Car Club of America (SCCA) Pro Racing SPEED World Challenge Touring Car Championship. The RTR RSX made its first on-track debut in October 2002 at Road Atlanta and will be the car of choice for the 2003 season. The Touring Car Championship series uses production vehicles with appropriate modifications for professional road racing. The RTR RSX features a 230-horsepower 2.0-liter i-VTEC 4-cylinder engine with factory and aftermarket performance parts. 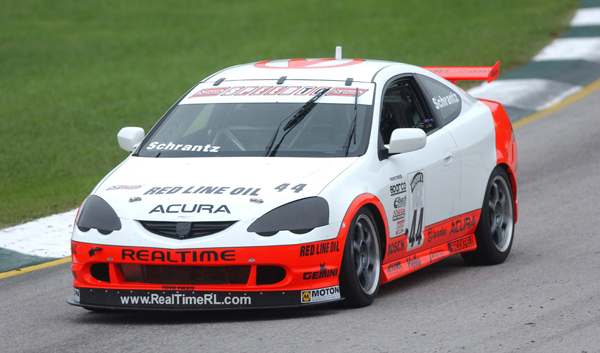 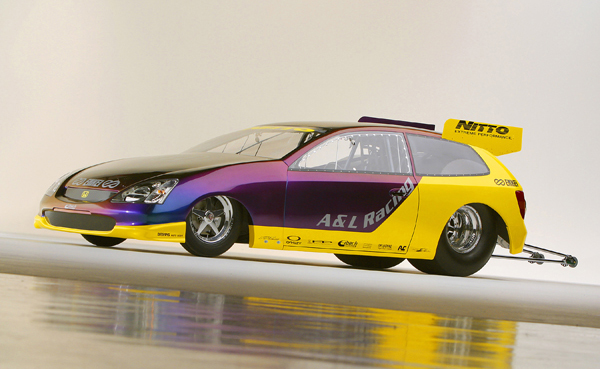 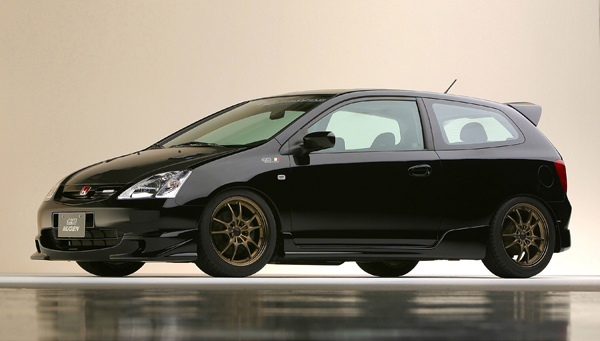 The addition of an available close-ratio 6-speed manual transmission with a limited slip differential on the 2003 Acura CL Type-S lineup provides a new level of excitement to an already potent performer. Acura developed a special CL Type-S concept that can take full advantage of the new six-speed manual transmission and limited slip differential by increasing horsepower with a supercharger. The CL Type-S concept incorporates a CARB-legal Comptech Supercharger and headers along with other Comptech modifications to provide 312-horsepower at the front wheels.

Comptech springs lower the CL by about 1.5 inches, and other Comptech production parts are used including the front and rear sway bars. Honda R&D Americas designed the prototype aero body kit, and high performance 19-inch wheels and tires are fitted. 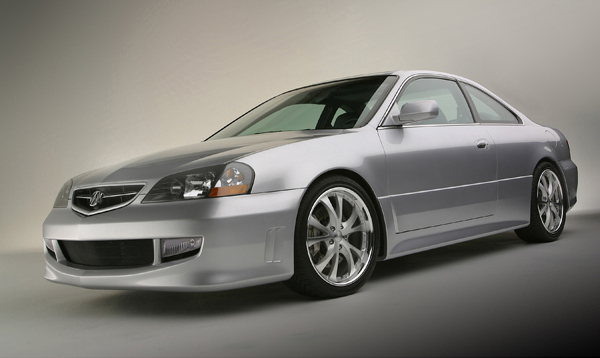