Tokyo, September 10, 1998 - Honda Motor Co., Ltd. announced today the development of both small electric vehicles and their management system to create a viable Intelligent Community Vehicle System (ICVS). Since August 1998, Honda has been conducting public test drives of the ICVS Racoon and the ICVS Mon Pal at Twin Ring Motegi in Tochigi Prefecture. ICVS Step Deck and City Pal vehicles together with a control center and docking bays will be added to the roster of test vehicles on October 5 to offer an even wider range of convenience.

ICVS concepts and goals
Honda's proposed ICVS is a limited range transportation system for the near future in which system members share environment-friendly vehicles, such as small electric cars and electric-power assisted bicycles. The system is designed to be integrated with members' private vehicles as well as with public transportation to help reduce the burden conventional vehicles place on the environment and alleviate various transportation problems such as parking space shortages, and traffic congestion, all without making transportation any less convenient.

ICVS development background
In October 1994, in Detroit, Honda announced the concepts behind the ICVS. In April 1996, at Metropolis '96 in Tokyo, Honda made public conceptual models of ICVS vehicles. Honda has been displaying vehicles and other components of the ICVS at Twin Ring Motegi since March 1998 while conducting tests with the ICVS Racoon and Mon Pal since August 1998. With the addition of the ICVS Step Deck and City Pal, the system should become more appropriate for real-world situations and meet a broader range of needs. Honda hopes to put this community-oriented transportation system into operation soon to help remedy various existing transportation problems.

Individuals registering as members of the system are issued an IC card exclusively for ICVS. 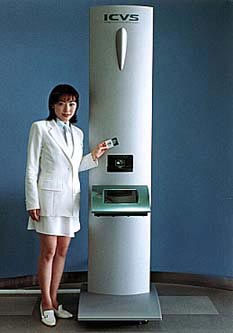 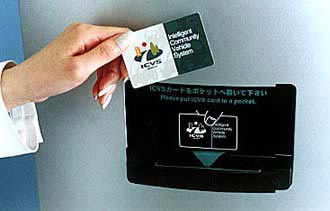 Caravan Drive
When the number or mix of vehicles at docking bays becomes seriously unbalanced, a system worker driving an ICVS vehicle can lead up to four unmanned vehicles to another docking bays thanks to technologies such as inter-vehicle communication systems and ultra-wide angle laser radar.

Automatic parking and vehicle docking
A host of technologies installed in each docking bay, including magnetic rails, guidance cables and ultrasonic sensors, enables vehicles to be parked and moved in and out of docking bays automatically.

Automatic recharging system
If the battery charge level on any vehicle returned to a docking bay is low, it is automatically moved to the recharging terminal so that the battery can be recharged. 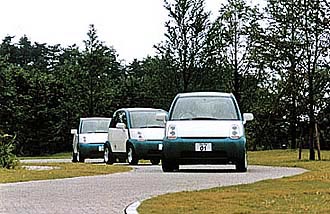 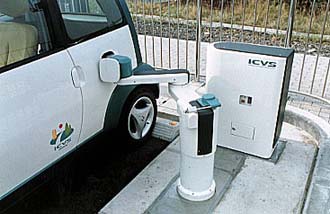 1. ICVS vehicles to be put into public service this October

An ultra-small single-seater hybrid vehicle, the ICVS Step Deck was developed as an urban business commuter. When the battery gets low, the engine automatically kicks in. The driver can get in and out of the vehicle by stepping on the step decks positioned at the front and back as well as on both sides, so the vehicle can be parked in extremely tight quarters. Four of these vehicles can be parked in a parking spot for a single standard vehicle. 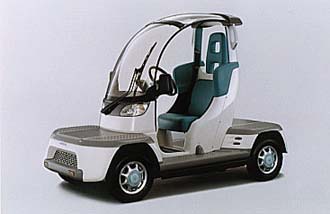 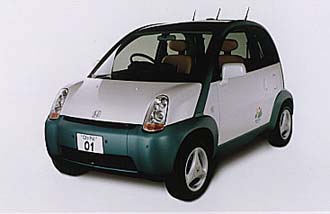 2. ICVS vehicles test driven by the public since August

The ICVS Racoon is an electric-power assisted vehicle that can climb slopes with ease while retaining all the convenience of a bicycle. With an IC card, riders can easily operate the main switches, lock the wheels, and insert or remove the batteries. What's more, the vehicle is almost effortless to use if fully charged batteries are rented from the power station (battery box exclusively for the system).

The ICVS Mon Pal is a one-person EV developed for use by senior citizens. Since the vehicle is designed to be driven at walking speeds, riders can comfortably drive in pedestrian areas, such as indoors and on sidewalks. 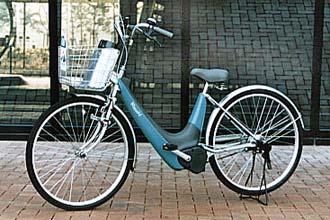 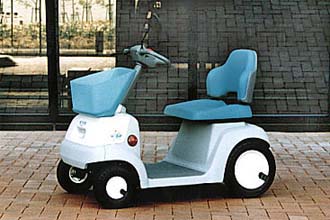