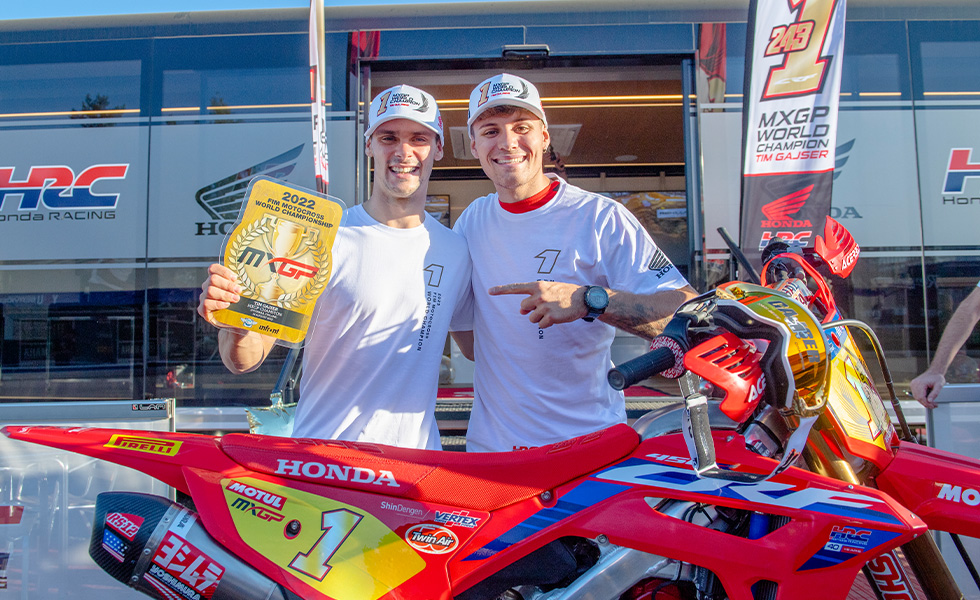 After winning the Motocross World Championship title in the MX2 class (250cc) in 2015, Tim Gajser moved to the premier MXGP class the following year, and won the championship along with the Rookie of the Year title. Although he did not win the title for the following two years, Gajser won back-to-back championships in 2019 and 2020, and by claiming his fourth MXGP title this year, has won a total of five titles in the Motocross world championship.

Rubén Fernández was third overall in the European Motocross Championship EMX250 class. Although he moved to MX2 in 2018, he moved back to EMX250 the following year. After moving full-time to MX2 in 2020, he finished ninth that year. In 2021, Fernández joined the MX2 team Honda 114 Motorsports, but from Round 17 moved to the premier MXGP class. This year, Fernández continued his full-time career in the MXGP class, ending up eighth in the championship, with two third-place finishes.

“It was an easy decision to continue this amazing relationship with Team HRC. It is like a second-family to me and there is no other place where I feel it is such a nice environment. I always say “Happy Rider, Fast Rider” and working with everyone in Team HRC, from all the technicians in Japan, to my practice mechanic, to my physio, it is all so enjoyable and I always look forward to going racing. I have won five World Championships with Honda so I am extremely comfortable on-board the CRF450R and they always do such a great job with developing and improving the machine, so I know I’ll be riding a bike capable of winning title number six in 2023. A huge thank you to all my supporters around the world, and I look forward to meeting you at Team HRC next year.”

“It is a dream come true to be riding for Team HRC in the MXGP class. The team is the best in the paddock and having ridden the Honda for the past couple of years, I am very familiar with the bike, but now I’m very excited to get to ride the full factory machine next year. I am also excited to work alongside Tim, as I know I can learn a lot from a rider who is five-times champion of the world. I’d like to thank everyone who has supported me throughout my career, who got me to this point and I can’t wait to show everyone what I am capable of. I now have the winter to prepare myself, and make sure I’m ready for the first gate-drop in 2023.”

“We are all very happy to have Tim signing again with Honda. He is an important figure for our company, and the perfect ambassador on and off the track. His achievement of winning five world titles is incredible and we hope that he can achieve even more goals riding on Hondas in the future. It is also exciting to have a new young rider Ruben Fernandez joining the team. He has done well the past couple of years and this is the perfect time for him to make the switch to Team HRC. He has already had success on Honda, and now we hope we can build upon that in the coming years. I wish both riders the best of luck.”