The Honda Prize 2020 Awarded to Dr. Henning Kagermann, Chair of the Board of Trustees, - National Academy of Science and Engineering (Germany)

- The proposal for “Recommendations for implementing the strategic initiative INDUSTRIE 4.0. Final report of the Industrie 4.0 Working Group” has had an enormous impact because it heralded the coming of the Fourth Industrial Revolution (Industrie 4.0) founded on cyber-physical systems (CPS)*1, which merge the digital world with reality.

The Honda Foundation, the public interest incorporated foundation established by Soichiro Honda and his younger brother Benjiro and currently led by President Hiroto Ishida, is pleased to announce that the Honda Prize 2020 will be awarded to Dr. Henning Kagermann, Chair of the Board of Trustees, acatech - National Academy of Science and Engineering (Germany), for pioneering the principles of Industrie 4.0 to connect the digital world with reality and declaring to the world the need to examine specifically how society can shape this paradigm shift for fostering economic growth and social benefit. The Honda Prize, established in 1980 and awarded once each year, is an international award that recognizes the work of individuals or groups generating new knowledge to drive the next generation, from the standpoint of ecotechnology*2.

In 2011 and 2012, lively debate took place in Germany over bringing together the online and offline worlds. Under the direction Dr. Kagermann, acatech exercised leadership in this debate. The academy developed the concept of Cyber-Physical Systems. Altogether with Dr. Wolfgang Wahlster (founding director of the German Research Center for Artificial Intelligence) and Dr. Wolf-Dieter Lukas, (State Secretary, German Federal Ministry of Education and Research) he coined the concept and slogan Industrie 4.0, the fourth industrial revolution, reached by digital connection of all industry processes. Dr. Kagermann became the lead author of “Recommendations for Implementing the Strategic Initiative Industrie 4.0”, published in 2013, which proposed the need for total industrial optimization with digitization in all industries, including manufacturing, distribution, healthcare, social infrastructure and agriculture. On that basis, the Platform Industrie 4.0 has been founded as one of the future projects in the “German Action Plan High-Tech Strategy 2020”. In his function as Global Representative Advisor of the Platform Industrie 4.0. Dr. Kagermann supported and formed numerous bilateral and multilateral cooperation and strengthened the international debate on digital transformation.

Also known as the Fourth Industrial Revolution, Industrie 4.0 fosters development in newly emerging countries by providing the technological knowhow of industrialized countries and contributing to building a sustainable society. In continuation and extension of the initiative Industrie 4.0 he led the national working groups “Smart Services” - on platform-based business models - and “Autonomous Systems”, i.e. systems that learn through machine learning and artificial intelligence. The Prize will be awarded to Dr. Kagermann for his outstanding achievements that are worthy of the highest recognition.

This year, the presentation ceremony for the 41st Honda Prize will be held on November 17, 2020 in an online format, to be broadcast in Japan, Germany and various other countries. The medal and certification, along with an honorarium of 10 million yen, will be presented to Dr. Kagermann.

The economic reform that Germany implemented following its unification in 1989 brought economic recovery. However, the Lehman Brothers collapse in 2008 brought a global economic slump and the brisk German economy reached an impasse. It was during the German government's search for a growth strategy to drive future economic development that Dr. Kagermann, who was president of acatech at that time, coined and proposed Industrie 4.0.

However, the impact of Industrie 4.0 is not limited to greater productivity in manufacturing. Its main goal is the networking of a wide range of human capabilities to create value, improvements to the work environment, lifelong education and the rational use of resources in ways that will liberate people from routine work and create a work environment focused on creating value. Additionally, the knowhow held by industrial countries, including advanced technologies and extensive expertise, is to be provided to newly emerging and developing countries to foster growth and to aid in building a sustainable society and improving work-life balance. This prompted Japan to propose Society 5.0, its fifth basic plan for science and technology and initiated similar responses from other countries, including Made in China 2025 in the People's Republic of China and the establishment of various corporate organizations led by the Industrial Internet Consortium (IIC) formed to accelerate the industrial implementation of IoT in the US.

The proposal to “connect” devices and services via the Internet was introduced in the latter half of the 20th century. The goal of Industrie 4.0 is to use data to bring greater visibility of the true nature of industry, as well as transparency, foreseeability and autonomy, and ultimately to bring a new level of flexibility, agility and optimization to the industrial world. It is a proposal to the world to create an improved ecosystem that includes human existence.

“Make people happy with technology.” This is the fundamental vision for ecotechnology set out by Soichiro Honda. The goal of enriching people’s lives through standardization and open standards that Industrie 4.0 aspires to has been recognized as worthy of the Honda Prize. We believe that presentation of the Honda Prize, amid the global COVID-19 pandemic that is forcing the entire society to undergo a digital transformation (DX) shift, will have great value in disseminating the true concepts underlying Industrie 4.0. For these reasons, the Prize will be awarded to Dr. Henning Kagermann for his outstanding achievements.

Chair of the Board of Trustees, acatech -
National Academy of Science and Engineering, Germany

1972:
Diploma in Experimental Physics at the LMU Munich 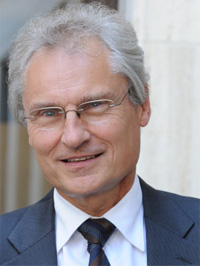 From 2009 to 2015 he was the first Chairman supervising the Executive Steering Board at EIT Digital (former EIT KIC ICT). The European Institute of Innovation and Technology (EIT) is an EU initiative combining the triangle of innovation, research and education. It is organized in clustered Knowledge and Innovation Communities (KIC).

From 2009 to 2018 he has been President of acatech - National Academy of Science and Engineering.

From 2010 to 2018 he was board member of Hightech Forum (since 2014), and its predecessor Research Union (2006-2013). The recommendations on research policy challenges and the necessary further developments of the innovation system became the backbone of the High-Tech Strategies for Germany. He was responsible for the projects Industrie 4.0, Smart Services and Autonomous Systems.

From 2010 to 2018 he acted Chair of the NPE, National Platform for Electric Mobility. The collective goal is the development and establishment of Germany as the lead market and the lead supplier for electric mobility. In this regard the NPE acts as an advisory body to the German government and reports extensively at regular intervals on the assumptions, recommendations and goals.

In 2018 he was appointed Chair of the National Platform Future of Mobility by the Federal Ministry of Transport and Digital Infrastructure. The aim of the NPM is to develop paths that cross and link modes of transport for a largely greenhouse gas-neutral and environmentally friendly transport system that enables efficient, high-quality, flexible, available, safe, resilient and affordable mobility in both passenger and freight transport.

Since 2018 he holds the chair of the acatech Board of Trustees.