On Saturday November 11, Marquez had secured his 8th pole of the season, setting him up in the best possible way for Sunday’s race. From the beginning of the race, he was consistently fighting aggressively for the lead. From mid-race, Marquez opted to maintain his position, and finished on the podium in third place to seal his championship victory. Team-mate Dani Pedrosa won the race, contributing to the team’s success in winning the team title.

Marquez debuted in the MotoGP class in 2013 from Honda’s factory team, Repsol Honda Team, and became the youngest rider to win the championship. The following year was just as successful, with Marquez winning 13 grands prix including 10 straight wins, to become the champion for the second year in a row. With his fourth title this year, Marquez becomes the youngest MotoGP premier class rider to win the championship four times. Honda also earned a back-to-back constructors title, and with Repsol Honda Team taking the team title, Honda has achieved its first triple crown since 2014.

“I pushed hard from the beginning to control the race, so I could win here in Valencia and secure my 4th championship title, but made a mistake at Turn 1 after overtaking Johann [Zarco, Yamaha]. I felt it was risky to keep on fighting him, so I concentrated on finishing the race. That’s when Andrea [Dovizioso, Ducati]  retired and I realized I won the championship. The first half of the season was physically and mentally tough. I didn’t felt comfortable in the first few rounds, but thanks to the team’s efforts, I started to have fun in the following races. Today’s race was just amazing! It only really sunk in that I became champion when I returned to the parc ferme with my team!”

“Honda sends Marc a heartfelt congratulations for winning the championship, consistently fighting for the title throughout a challenging season. We are also thrilled to win the constructors and team titles as well, giving Honda the triple crown. I thank the team and it staff, our sponsors, and our supporters. Honda will continue to strive to win in the premier class of motorcycle racing, and look forward to the continued support we have already enjoyed.”

“This season was very tough, with each manufacturer becoming a lot more competitive, and track conditions varying between the grands prix. Marc kept on winning with consistency, giving him the championship. I believe we were able to win the triple crown through the fantastic work by the team and HRC members, and as HRC president, I am proud of everyone involved in realizing this result, and thank their hard work and challenging spirit. I also thank the many sponsors and fans supporting Honda’s racing activities.” 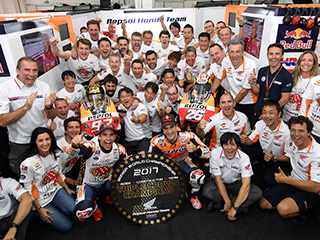 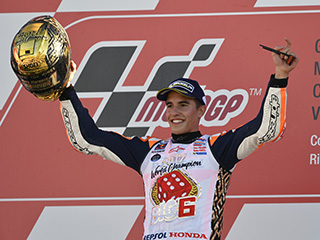