HondaJet to Debut in the Middle East

GREENSBORO, N.C. — Nov. 22, 2016 — Honda Aircraft Company announced today that it will showcase the HondaJet at the Middle East Business Aviation Association (MEBAA) Conference Dec. 6-8 in Dubai, the region’s premier business aviation event. The appearance at the Dubai World Central – Al Maktoum International Airport will mark the first time a HondaJet will be on public display in the Middle East.

“We are excited to display the HondaJet at MEBAA for the first time where its high speed, quiet and comfortable cabin, sporty styling and handling have appealed especially to savvy Middle East prospects and aircraft enthusiasts,” said Honda Aircraft President and CEO Michimasa Fujino. “With a range that connects the entire Arabian Peninsula, this region could benefit from this high performance aircraft and our show presence will help us determine the best timing of Honda Aircraft’s entrance in the Middle East market.”

A red and silver HondaJet will be on public display during the event. The HondaJet is the world’s most advanced light jet, and its distinctive design incorporates advanced technologies and concepts. The HondaJet patented Over-The-Wing Engine Mount configuration, natural laminar flow wing and fuselage nose, and composite fuselage were developed from long-term research activities. These innovations combine to make the HondaJet the fastest, most spacious and most fuel-efficient jet in its class. The aircraft is certified for single pilot operation. 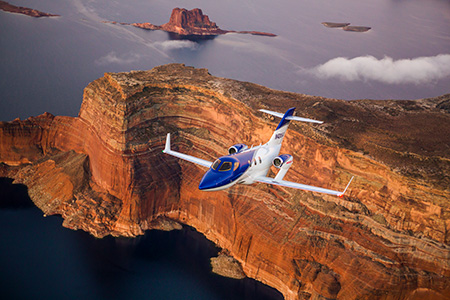 The HondaJet is the fastest, highest-flying, quietest, and most fuel-efficient jet in its class. The HondaJet incorporates many technological innovations in aviation design, including the unique Over-The-Wing Engine Mount (OTWEM) configuration that dramatically improves performance and fuel efficiency by reducing aerodynamic drag. The OTWEM design also reduces cabin sound, minimizes ground-detected noise, and allows for the roomiest cabin in its class, the largest baggage capacity, and a fully serviceable private aft lavatory. The HondaJet is equipped with the most sophisticated glass flight deck available in any light business jet, a Honda-customized Garmin® G3000 The HondaJet is Honda's first commercial aircraft and lives up to the company’s reputation for superior performance, efficiency, quality and value.