December 4, 2007 TOKYO - Honda Motor Co., Ltd. announced that it will launch full model changes for the FORZA Z and the FORZA Z ABS*1on Tuesday, December 25. The FORZA scooter series has won Honda many fans with their sporty styling and advanced electronic features, including the Honda S-Matic electronically controlled automatic transmission, and the Honda Smart Card Key System, which allows the rider to start the engine without key operation.

Powered by a newly designed four-valve single-cylinder engine, the next-generation scooter realizes a powerful riding feel while complying with the 2006 Japanese motorcycle emission regulation. The new frame and suspension system ensure a more comfortable ride than before. Refinement of the overall body configuration, which includes modifications to the front meter visor shape and placement, results in an elegant form that realizes both increased aerodynamic performance and comfort. With the development concept "premium and comfortable two-seater," Honda has brought these models even further forward.

For the engine, a newly designed four-valve engine has been adopted rather than the two-valve engine of the previous model. Modification of the combustion chamber configuration, along with the adoption of metal crankshaft bearings and a new dual-core catalyzer have led to higher output in reducing vibration, and further improving environmental performance, including greater fuel efficiency.

The ever-popular Honda S-Matic automatic transmission now features a load sensing control system, the world's first*2 for a motorcycle, in addition to the seven-speed manual shift mode. By automatically selecting the shift position for optimal driving force to suit the riding conditions, the sensing system provides a powerful riding feel even on uphill roads or during tandem riding.

Since its market launch in 2000, the FORZA series has been well received for its sporty performance and superb utility. The 2004 full model change with the concept "stylish open two-seater" received high evaluation from customers and has been a long-time favorite, being as a top placement*3 for the number of light-weight motorcycle registrations for 37 consecutive months, from May 2004 to May 2007. 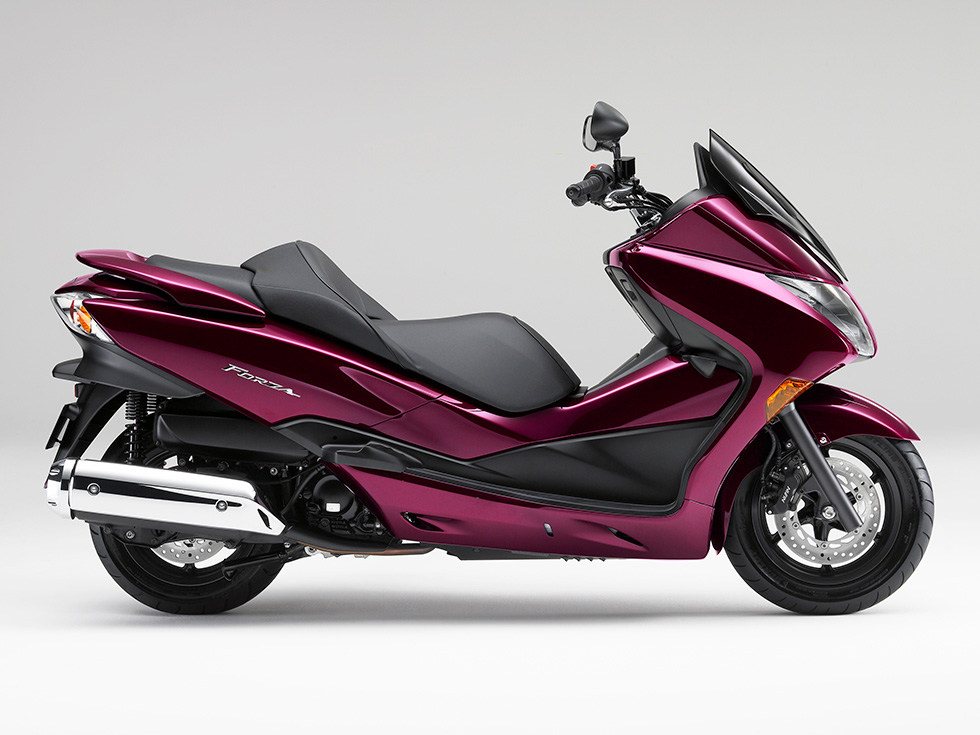 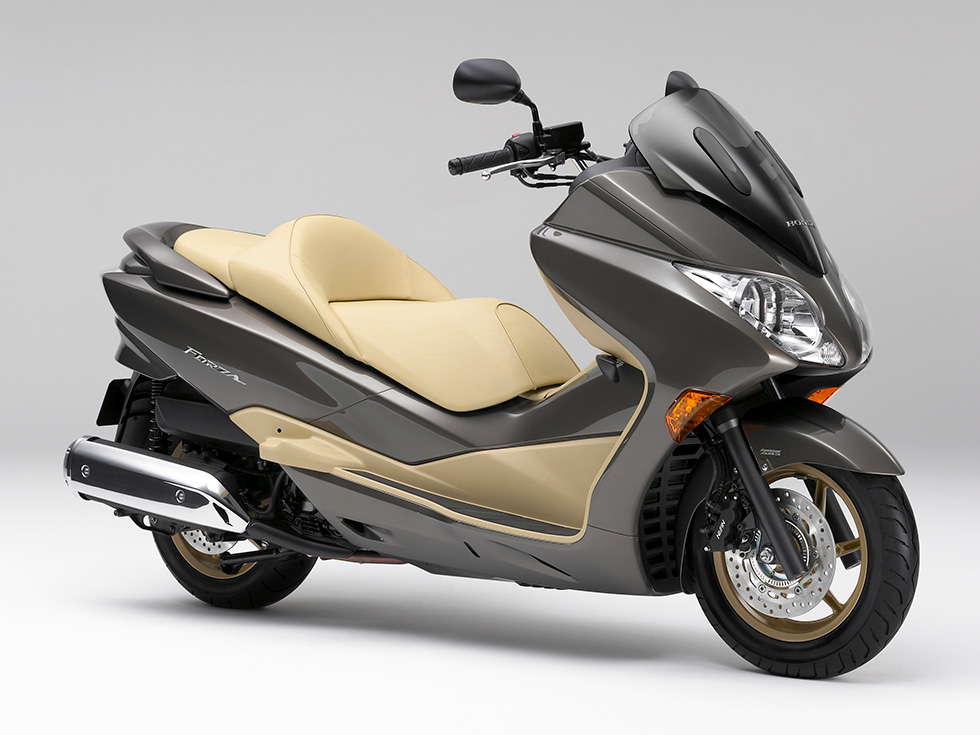 In the new FORZA series, the conventional two-valve engine has been upgraded to a newly designed water-cooled four-stroke four-valve single-cylinder engine. To reduce engine noise, along with metal crankshaft bearings, a sealed compact crankcase was adopted to ensure sufficient lubrication. With this sealed crankcase, it is the first time for Honda to equip a primary balancer shaft. On the environmental side, the engine makes possible one of the lowest fuel consumptions in its class*4, using a roller rocker arm and an offset cylinder configuration to reduce frictional losses, and adding an O2 sensor for optimized fuel injection control. The use of a newly developed dual-core catalyzer allows clean environmental performance meeting the 2006 Japanese motorcycle emission regulation while also guaranteeing high output, reducing vibration and contributing in superb fuel economy.

In addition to the seven-speed manual mode, the Honda S-Matic automatic transmission installed in the FORZA Z and FORZA Z ABS now features a load sensing control system, a first for motorcycles. In automatic mode, the mechanism automatically determines the load from the vehicle speed, engine rpm and throttle opening, and automatically selects the gear that provides the optimal driving force for conditions such as uphill roads or tandem riding. This new system realizes a powerful riding feel even on hilly, winding roads.

The concept behind the design was "a solid body and emotional surfaces." The slimmer body and the minimal rear overhang emphasize a compact and sporty feeling. Through an overall review of the body design including changes in the configuration and placement of the front meter visor, the new styling achieves an elegant form with improved aerodynamic performance without compromising comfort. Asserting a sense of presence, the circular tail lamp inherits the image of the previous model, with an even sportier design. And with the instrument panel, the design offers a high level of quality reminiscent of an automobile.

For new FORZA Z, simple but popular Digital Silver Metallic has been chose from previous model. Also, three new colors have been set for the FORZA Z: Graphite Black, Duke Magenta Metallic and Candy Tahitian Blue. For the FORZA Z ABS, two new colors, Titanium Metallic and Graphite Black, have been set for the body. Along with the body colors, seat and step areas are colored in mocha-beige, creating overall of two-tone colored body. With wheels painted in gold, FORZA Z ABS provides luxurious image.