The F150 was Honda’s first tiller released in 1959. The tiller has the oldest history of the numerous items in our comprehensive lineup of power products. Honda manufactures approximately 80 thousand small tillers annually in Japan, the United States and France, and supplies them to farmers and amateur gardeners who grow vegetables in gardens or small field in Europe, Japan and the United States.

The F200 (called the “Komame” [diligent worker] in Japan) that was developed in 1980 as a mini-tiller for home gardens was a big hit, with sales amounting to 50 thousand units per year, and virtually created the market for mini-tillers in Japan. Cumulative production of the “Komame” series (including the F210 that followed the F200 and the current F220 model) making it Honda’s main tiller model.

The Salad FF300 featuring a vertical engine located in the center with a low center of gravity and ARS (Active Rotary System, providing forward rotation on the inside and reverse rotation on the outside) was introduced in 2003. This revolutionary tiller has received high acclaim from both amateur gardeners and professional farmers because it does not require much power or experience for operation.

The Pianta FV200 rotary tiller released in 2009 and the Salad CG FFV300 tiller (in 2013) run with home-use butane gas canister, and were admired mainly by beginners in gardening for the ease of use transport and storage. 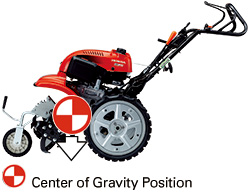 The midship layout locates the engine in the center of the unit, with the rotary tiller in front and large wheels in the rear. This achieves superior performance, optimum balance and outstanding handling ease. 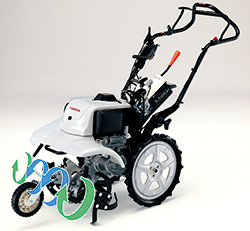 The rotary shaft adopts a unique Honda mechanism in which forward rotation is provided on the inside and reverse rotation on the outside. This mechanism offsets the reactive forces of tilling on the shaft, facilitating effective and stable tilling of even hard soil.

Soichiro Honda, the founder of the company, spearheaded the effort to create the F150 tiller based on his desire to "create something new that did not exist before." Incorporating such advanced technology as an OHV inverted engine and integral frame structure, this innovative tiller took the industry by surprise. The F60 (released in 1961) lead the way for entrance into the European market. All Honda tillers, from the F60 to the F200, FF300 and FV200 have inherited the Honda DNA of "Creating something new that did not exist before." 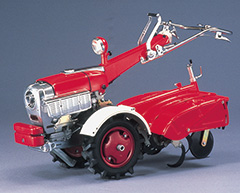