Honda manufacturers approximately 300,000 water pumps in Thailand, India, China, the United States and Kenya, and supplies them to customers around the world.

Water pumps are vital for supplying and draining water at farms, construction sites, as well as during droughts, floods, or other such disasters or emergencies, and can be divided into a number of types according to their application. There are general purpose pumps that are used for the irrigation of fields
and at various work sites, high-pressure pumps that are used to lift water up to high locations and pump
water long distances, and lightweight pumps that can be easily transported and used anywhere. In addition, there are pumps developed as overseas specs. models such as trash pump that can be used to pump water that contains a certain amount of solids (30mm or less) and pumps for misting chemicals.

The performance of engines used to power water pumps which are often operated continuously for an extended period of time has a large influence on the value of the product. The main engine used for Honda water pumps is GX engine acclaimed as the commercial use standard due to the world’s highest level of environmental performance and durability. Light use models are powered by GP engine or mini 4-stroke GX engine, which have also received high acclaim in the global market. In addition, our high pressure washer which incorporates GX engine delivers superior performance when washing cars, cleaning the outer walls of houses and buildings.

Until WX10 was released, almost all of the 1 inch bore small pumps were powered by 2-stroke engines. Honda decided that developing a 4-stroke model was important, and released WX10 that incorporates GX25 4-stroke ultra-compact engine that can be held at any angle throughout the 360 degree spectrum. Furthermore, while achieving the same level of weight and performance as a 2-stroke model, WX10 boasts outstanding environmental performance, with very low fuel consumption, noise levels and clean exhaust gas. In the United States, support has been widely received from general households that use it to water lawns and vegetable gardens. 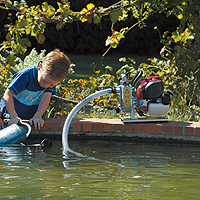 The water-cooled single cylinder OHV GX engine which is one of Honda’s strengths powers its pumps and high pressure washers with ease. The superior flat torque ensures stable water supply / spraying performance from low to high rpm ranges. Because GX engine is a 4-stroke engine, it is quiet, feature superior durability and starting ease and achieving a low level of fuel and oil consumption. 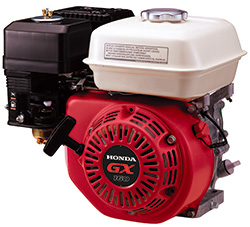