Handheld units is the name used for a variety of devices that help people do work, such as trimmers, sprayers, blowers and chainsaws. The global market for handheld units amounts to 70 million units, and trimmers account for 47% of this market (as of 2013). Honda produces trimmers, sprayers and blowers that are powered by ultracompact 4-stroke engines.

In the past, 2-stroke engines had been widely adopted because of their simple structure and ability to be operated in any orientation, but they had the environmental problems of poor fuel economy and high emissions. Four-stroke engines feature superior combustion efficiency, but had not been incorporated into handheld units due to the difficulty of being operated at an angle because of the oil lubrication structure and their weight / size.

In 1997, Honda developed the GX22 and GX31 world's first 360-degree-inclinable ultracompact lightweight 4-stroke engines that can be operated at any angle since they are not impacted by tilting them. In addition to powering Honda trimmers and backpack sprayers, the GX22 and GX31 are also incorporated in OEM units, with cumulative production amounting 1.2 million units, making them hit products. The subsequent OHC engine model GX25 (2002) and GX35 (2003) feature an optimum total balance of superior environmental performance, low noise and low vibration only possible in 4-stroke engines, resulting in them being incorporated into handheld units as well as a wide range of other applications, such as tillers and water pumps. These features have made them long-selling products, with annual sales amounting to over 700 thousand units.

H Type Engine for Backpack Sprayer
The first H-type engine sold by Honda in 1953 was developed as the power unit for an OEM (Original Equipment Manufacturer) backpack sprayer. It adopted an aluminum die cast manufacturing method and other revolutionary technology at the time to make it compact and lightweight so that it could be worn as a backpack. This engine blazed the trail for the ultracompact engines that were
subsequently developed. 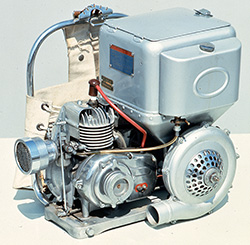 Rotary Slinger Pumping Lubrication System
In the past, 4-stroke engines which circulate oil that accumulates in the oil pan had seizing and other problems when they were operated at an angle due to inadequate lubrication. The rotary slinger pumping lubrication system developed by Honda is not affected by the angle at which the engine is operated since it transforms the oil into a mist. Honda was the first company in the world* to develop this unique technology that enables engines to be operated at any angle.
* According to Honda investigation in January 1997 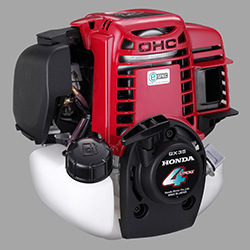