Honda produces approximately 46 thousand compact gasoline generators ranging in capacity from 0.9 –12 kVA in Japan, China, France, India, Thailand and US and supplies them to North America, Europe and various other countries around the world. The wide lineup of models is used for a diverse range of needs, such as an emergency power source in the event of a power failure, outdoor construction work, outdoor leisure activities and for disasters and other emergencies.

The conventional type of generator has a simple structure and is low in cost, while the two newer types feature a dedicated high-speed multi-pole alternator that incorporates an engine flywheel function, achieving high efficiency, super light weight and compact size. The generator which features a sine wave inverter can be used safely with PCs and various telecommunications equipment that is highly sensitive to changes in frequency and voltage, and this had led to the rapid expansion of the market for this type of generator.

This market has in fact been created by Honda’s advanced technology, and the high level of trust in the unique technology and diverse functions incorporated into Honda generators has expanded support by customers.

1998 saw an introduction of a series of generators that incorporated a super light weight and compact sine wave inverter offering low fuel consumption and low noise, supplementing the existing eco-throttle mechanism that achieves good fuel economy and parallel operation function that enables nearly double the power to be obtained.

A series featuring a dual voltage type sine wave inverter, which can be used as both an emergency power source for stores and offices as well as to operate 200V household appliances, was introduced. What’s more, in 2006, the EU55is ultra-quiet generator was released, in 2009, the EU18i were introduced.

Honda will continue to enhance its extensive lineup of models by introducing other high value-added generators.

Eco-Throttle Mechanism
This mechanism uses an electronic governor to automatically control the engine so that it is operated at the optimum speed according to the load of the machine being used. In addition to providing superior fuel economy in the practical operation range and very low noise levels.

Honda’s first generator was the E300 portable generator with an output of 300 VA that Honda pioneered in 1965. This model became a best seller, with cumulative production amounting to 500 thousand units. At the time, portable generators were rare, and there were various technological obstacles to be overcome in developing a portable generator that was “small, lightweight, quiet and easy to use.” The philosophy embodied in the fundamental concept for the E300 of “Creating something that did not exist before” has been inherited by the current series of generators. 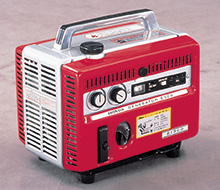 The LiB-AID E500 is a portable battery inverter power source that stores electricity generated by a generator. Honda’s unique sine wave inverter technology enables high quality electricity to be supplied. The E500 was developed using the design of the E300 as the motif, Honda’s first generator, and can be utilized in a wide range of everyday situations. 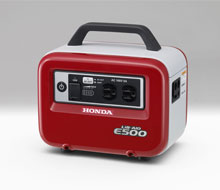 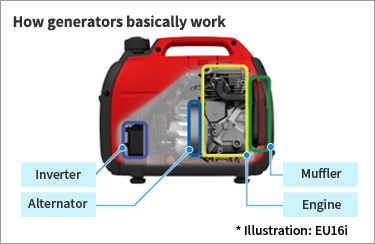