The Super Cub Became a Vital Part of People’s Youth.

Born in a small island country, the Super Cub spread rapidly to every part of Japan and soon became an integral part of people’s daily lives. Only a year after its debut in Japan, the Super Cub crossed the Pacific to go on sale in the United States. A little bike in a big country, the Super Cub was much loved by America’s youth as a cheap and easy way to get out and about. It also attracted attention as a handy item for outdoor activities, leading to the development of Honda’s famed Trail models.

The Super Cub went on sale in the United States in 1959. At the time, the USA was indisputably the world’s most affluent country, with the highest levels of consumption of any nation in modern history.

The first to catch on to the charms of the Super Cub were the trendsetters of Los Angeles and the country’s West Coast. In the language of the times, these were ‘Hollywood’ types, pleasure-seekers living on the cutting edge of fashion and prevailing trends. America’s premier motorcycle company only made big bikes, so the compact Super Cub looked to be something new, a modern and stylish little two-wheeler.

The Hollywood people soon hopped onto the latest trend happening, and started riding around town on Super Cubs. For these fashion followers, the Super Cub was akin to the skateboard or the more modern Segway.

Motorization in the USA at the time centered on large cars powered by big V8 engines, so the 50cc Super Cub wasn’t anywhere near as fast as those vehicles. It clearly wasn’t suited to long trips, but instead served as a convenient form of short-range around town mobility.

West Coast university students soon started using Super Cubs in their daily lives. At a time when monthly rents for student apartments were about or $50, the Super Cub’s list price was only $295. This was a time when a salaried worker’s monthly starting pay was around $500. Easily purchased on installment plans, the Super Cub quickly grew in popularity among student populations. Nothing till then had ever offered such excellent mobility for traveling to and around vast college campuses. These students might not have been able to afford a car, but with a part-time job a Super Cub was well within reach. And the Super Cub also made it effectively easier to get to and from those local part-time jobs.

For young West Coasters of the ’60s, the Super Cub was the mobility item of youth that opened up new worlds of enjoyment. There was even a seasonal boom in teenagers fond of motorized transport being given Super Cubs as Christmas presents by their parents.

Honda also sold kit parts that could transform the Super Cub into race-style Roadster or Rally bikes, or into a sporty-looking Student Cub.

The Beach Boys, a rock band known round the world as the kings of the West Coast surf sound, even had an international hit in 1964-65 with their song about the Super Cub, called ‘Little Honda,’ that had young people the world over coming alive to the small bike’s youthful spirit.

Another big reason for the Super Cub’s popularity on the West Coast was the fact that the climate there was mild the whole year round, unlike many other snowbound parts of the USA.

Super Cubs were also beginning to be used in people’s outdoor activities. The genesis of this was the Trail 50 (CA100T), created by an inventive man at Honda America who removed the Super Cub’s leg shields and front fender, and added on block-pattern tires and a larger switchable rear sprocket.

The Trail 50 sold for $275, and attracted the interest of people who loved outdoor activities, in particular hunters and anglers who appreciated the bike as a compact and lightweight mobility solution that could handle rough roads. These nature lovers would throw a Trail 50 in the rear of a pickup truck and head off to the mountains, backwoods or seaside, and use the bike to search for better hunting or fishing sites over trackless terrain.

The Trail 50 was further modified with the addition of a rifle/fishing rod holder, a raised muffler and other changes that lead to the creation of specialized models for hunting and fishing named the Hunter Cub and the Fishing Cub.

The Trail 90 (CT90) was a genuine rough-road bike developed from the Trail 50 with increased engine size, a new telescopic front fork, a handy dual-range sub-transmission, and a big rear-facing side-draft carburetor equipped with a large air filter. The Trail 90 soon came to be widely used in managing the day-to-day work on large farms, turning the Super Cub into a work bike once again, this time in the USA.

The Super Cub sold for 15 years in the United States, finally coming to the end of its run in 1974.

In 1959, the Super Cub crossed the ocean to go on sale in America, the land of the automobile, under the name Honda 50. The CA100 went on sale in 1962 with a bright red body color plus tandem pillion steps and a seat big enough for two. The “You Meet the Nicest People on a Honda” campaign the following year completely changed the perspective and lifestyles then associated with motorcycles in America, making the Honda name famous overnight. The joy of riding a motorbike and the nimble ease of its 3-speed centrifugal clutch transmission combined with the ’60s surfing and hot rod booms and the ‘Little Honda’ song by the Beach Boys and the Hondells to inspire young people of the time. 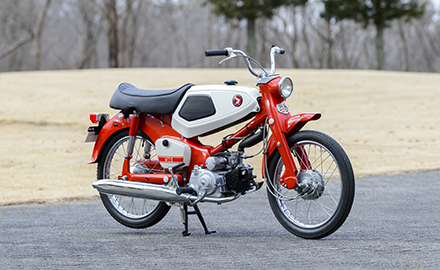 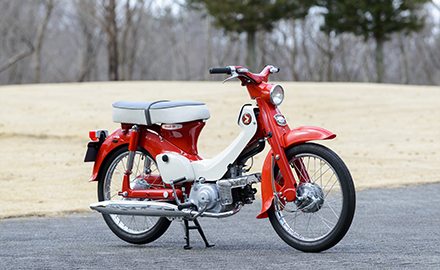 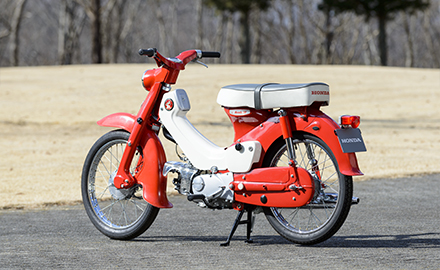 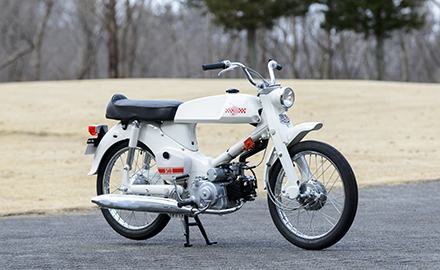 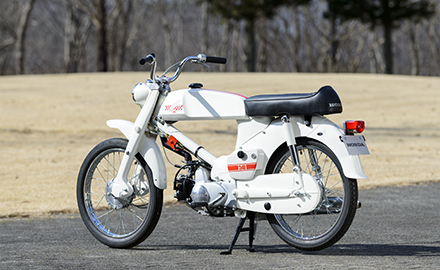 Custom parts kits were also sold for the US market C100, the CA102 (with electric start), and the 55cc CA105 models. With a minimum of parts, these specialized kits allowed owners to give their Super Cubs a sportier look. The Roadster kit contained a tank cover fitted with rubber knee grip patches. The seat could also be replaced with a sporty-looking semi-long type.

The Student kit provided a light, uncluttered look characterized by Honda wing marks adorning the sides of its center backbone cover, and featured a distinctive chrome-plated cover over the engine and custom side covers. The Rally kit included a long tank cover with racing flags and wing marks, a racing-style seat, custom side covers, tubular handlebars, and a short front fender. The tank covers for both the Roadster and the Rally kits were also internally equipped with actual molded plastic fuel tanks. 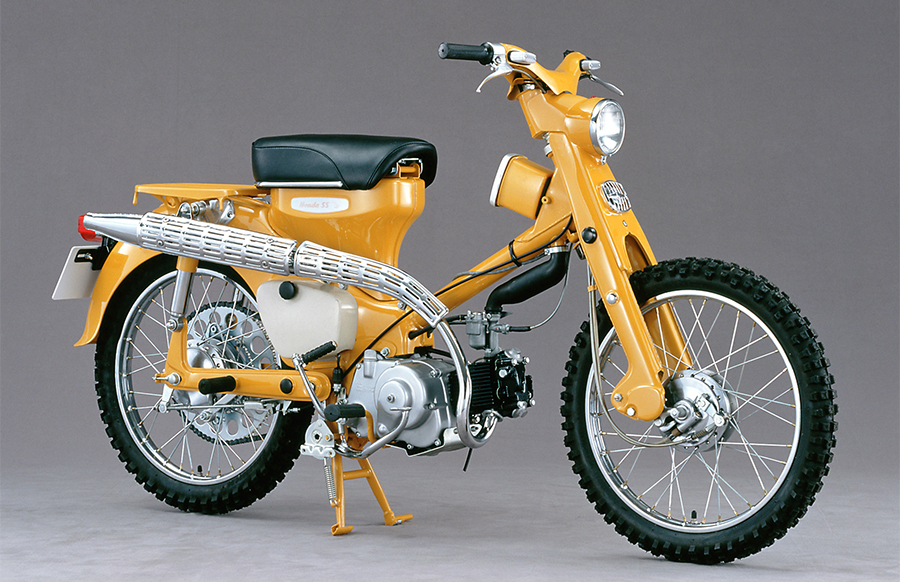 The original C100 Super Cub served as the base model for the Hunter Cub that debuted in 1962. Designed for hunters and anglers, and equipped to cope with rugged off-road trails, the Trail 50 had its leg shields and front fender removed for easy travel over hills and grassland, and was soon put to work managing American farms and woodlands.

Some of its most notable features were its off-road ready block-pattern tires and a double rear sprocket that effectively reduced the gear ratios to better cope with rough roads and steep slopes by switching the chain to a larger sprocket ring. The Trail’s robust specifications gained a solid reputation, leading to the 1963 introduction of the CA105T with its additional raised muffler.

The Evolution of a Genuine Trail Bike.

In 1964, the trail-wise Cubs that had been designed for use on rugged roads evolved into the CT200 Trail 90, which featured a larger-displacement 86.7cc overhead valve (OHV) engine and the same 4-speed gearbox used in the C200 Benly. In 1966, a further model change produced the CT90, with a new 89.6cc overhead cam (OHC) engine.

1968 saw the introduction of a new dual-range sub-transmission that replaced the Trail 90’s double sprockets to allow riders to switch between low and high gear ranges with the flip of a single lever. The front suspension was also changed to a more compliant telescopic type in 1969, along with other innovations and modifications that further refined its design.

In America, a country of vast expanses, motorbikes were often loaded onto the backs of trucks and campers to travel to far off destinations. A further modification allowed the handlebars to rotate 90° with the flip of a single lever. And to keep the bike from running out of gas while riding in backwoods and grasslands, an auxiliary fuel tank was designed to mount to its left rear side. The 1973 CT90 appears in the above photos.