Major Reforms Tailored to the Era of Globalization

As the Super Cub fast approaches its 60th birthday, looking back we can see that the world has become a much different place, and the environment for motorcycles has also undergone momentous changes over the ensuing years. However, while the basic silhouette of the Super Cub has remained very much the same over the years, its internals have steadily evolved in close step with the changing times.

Fuel Injection Makes Its Way to the Super Cub 50 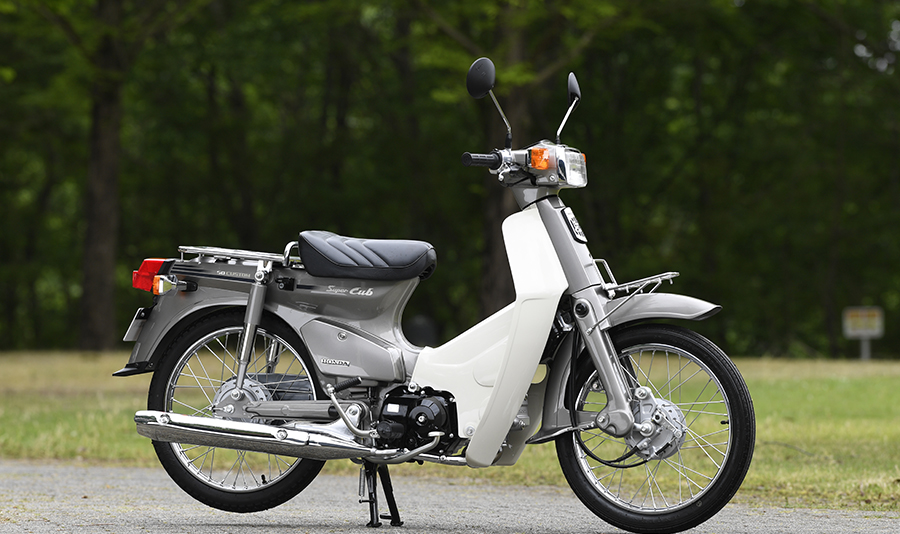 As global warming came to be a worldwide concern, even the comparatively nominal emissions produced by motorcycles began to be subjected to regulations. Of course, efforts had been made before to clean up exhaust emissions, but to conform with new regulations adopted by Japan in 1999, the Super Cub 50 was given new carburetor settings and a crankcase emissions control system.

The following year, the same refinements were applied to the Super Cub 90 to reduce emissions, however not to the Super Cub 70. This brought to an end the long run of the C65, which had been in continuous production since its first debut in 1964.

2006 emissions regulations were said to be the toughest ever for motorcycles, leading to many motorcycles disappearing from the lineup altogether. Yet, with the adaption of a PGM-FI electronic fuel injection system and a catalyser element built into its exhaust pipe, the Super Cub 50 series still managed to meet these strict new regulations.

While the exterior design of the Super Cub 50’s engine maintained essentially the same traditional horizontal proportions, its interior design underwent radical alterations, including an offset cylinder and roller rocker arms, in order to continue operating smoothly well into the 21st century. 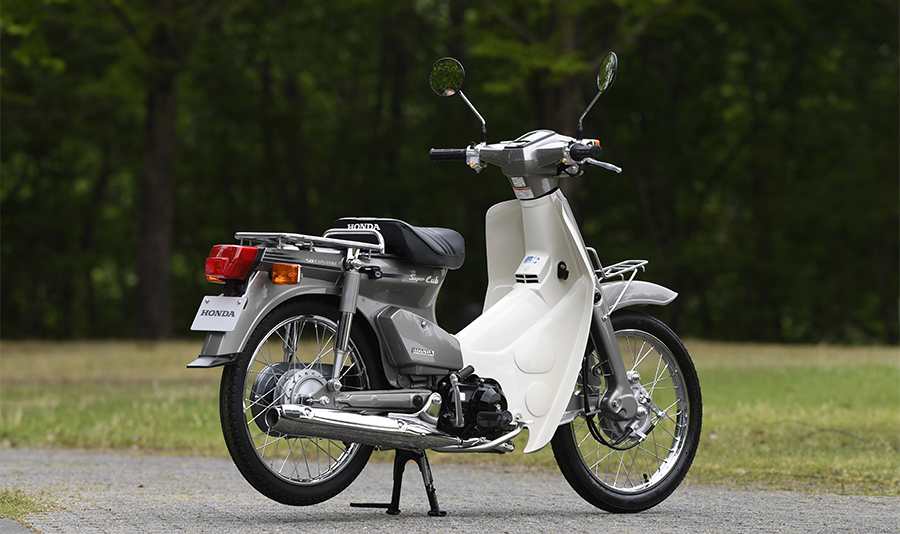 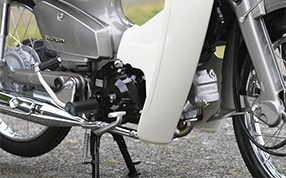 Engine
The Super Cub’s new computer- controlled PGM-FI electronic fuel injection system maintained an optimal fuel supply, making it easier to start on cold winter mornings, while its exhaust pipe catalyser further improved emissions. The engine’s black-painted crankcase covers had been a feature since the Red Cub was introduced in 1982. 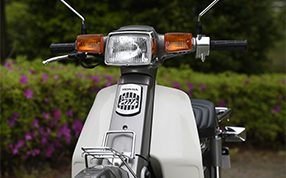 Headlight
The Standard, Deluxe and Custom Super Cubs, as well as the Press Cub 50 and the Little Cub all conformed to 2006 emissions regulations. These photos of the Super Cub 50 Custom highlight its characteristic angular design, beginning with its headlight. 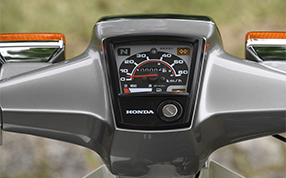 Speedometer
An engine warning light was added to the instrument panel on models that met 2006 emissions regulations. The 50 Custom shown here had a warning light located where the ED position lamp had been since first installed on the 1982 Super Cub 50 SDX.

A Full Model Change to Mark the Cub’s 51st Year 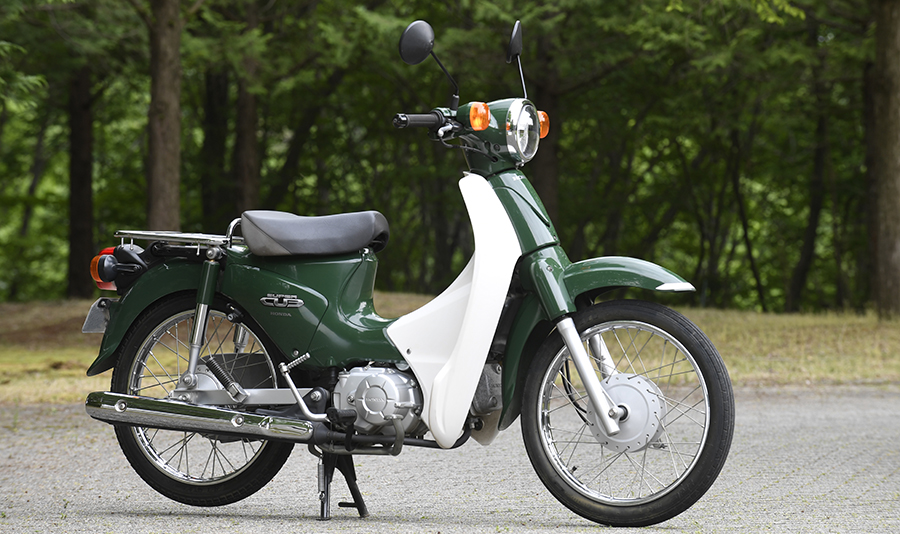 The Super Cub 110 (JA07) appeared in 2009 as the newest model in the lineup following the Super Cub 90. It represented a major step forward with its newly designed backbone frame, a new oil jet positioned under the engine’s piston to reduce temperatures and improve durability, and a two-stage clutch to minimize shift shock, as well as other minor improvements.

Already a global model, this Super Cub was centered on the ASEAN region, with major components such as part of the frame and the engine being procured from Honda Thailand to be assembled in Honda’s main global motorcycle production facility, the Kumamoto Factory. Traditional elements of the Super Cub that had long been much loved in Japan were also incorporated, including the round design of its headlight and the height of its rear carrier, which was the same as that of the Super Cub 90. 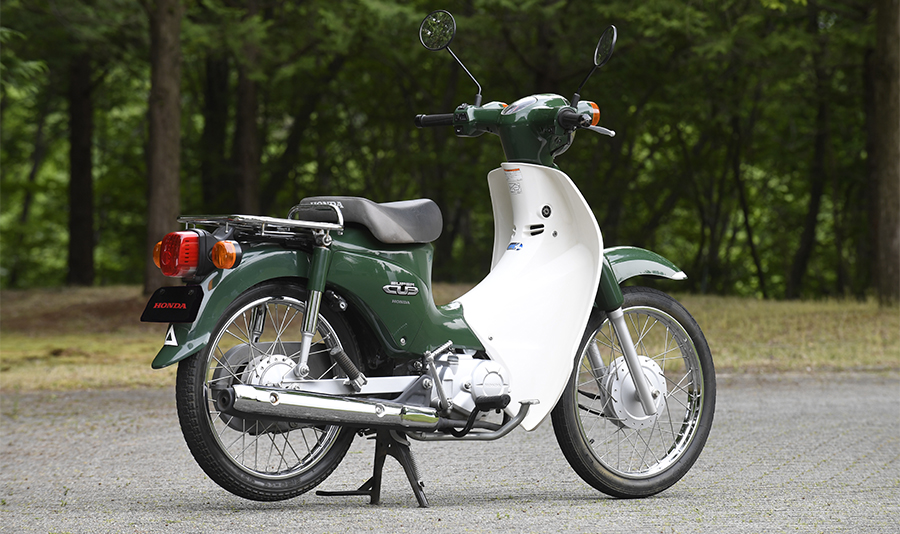 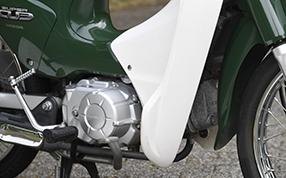 Engine
As Japan’s first small motorcycle, the Super Cub 90’s engine was upgraded to 110cc, which by then had become Honda’s mainstay in the ASEAN region. A new jet of oil to cool its piston assured the same durability and reliability as the earlier 90cc engine while greatly enhancing its power output and torque, as well as improving fuel economy. 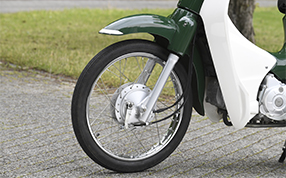 Front
The front suspension was upgraded from the earlier bottom-link configuration to a more modern telescopic design, improving both rigidity and stroke to give it a more grounded feel. The front tire size was also narrowed from 2.50 to 2.25. 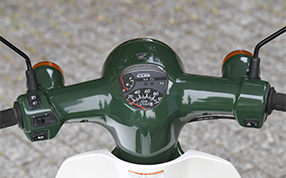 Speedometer
The instrument panel continued the basic look of earlier models, but was the first—apart from the Custom and Thai Cub—to include a fuel gauge. The turn indicator switch was moved to the left side, the usual position for motorcycles.

Restyling for a Global Model 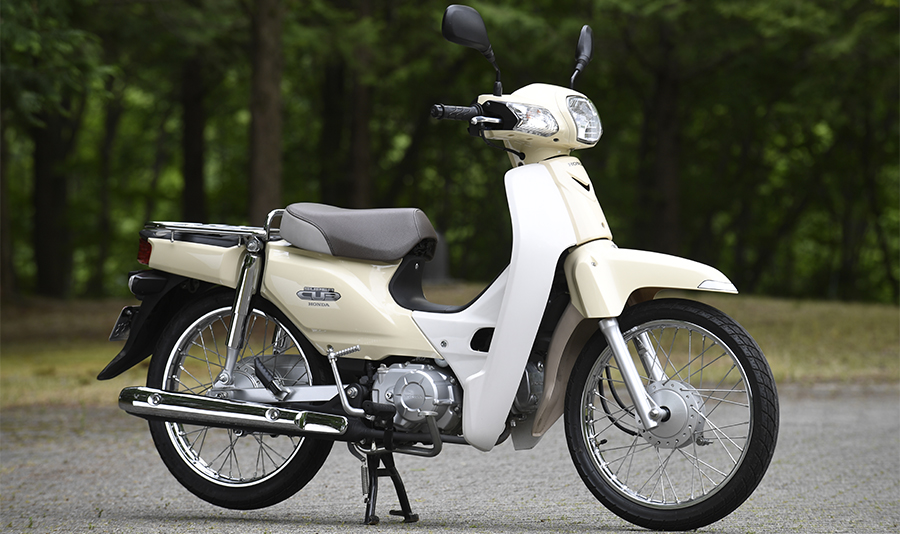 In 2012, the Super Cub 110 was completely restyled as a so-called ‘Global Cub,’ with a single standardized design for the entire world. This was carried out in consideration of the expected future integration of noise and emissions regulations worldwide, as well as to create a new base for further potential improvements.

The Japanese domestic Super Cub 110 also changed accordingly, adopting a squarish headlight and turn indicators, and taking on a more angular rather than curved design. The Super Cub’s Japanese specifications maintained the same 695mm carrier height as earlier versions, while extending its wheelbase in order to enhance straight line stability.

Featuring prominently in this shift to becoming a ‘Global Model’ was a 20,000 yen reduction in the Super Cub’s price (excluding tax). The same year, the Super Cub 50 was also completely restyled, adopting the same body and engine as the C110. This left only the Little Cub retaining the same backbone and pressed steel frame it had inherited from the original C100 Super Cub. 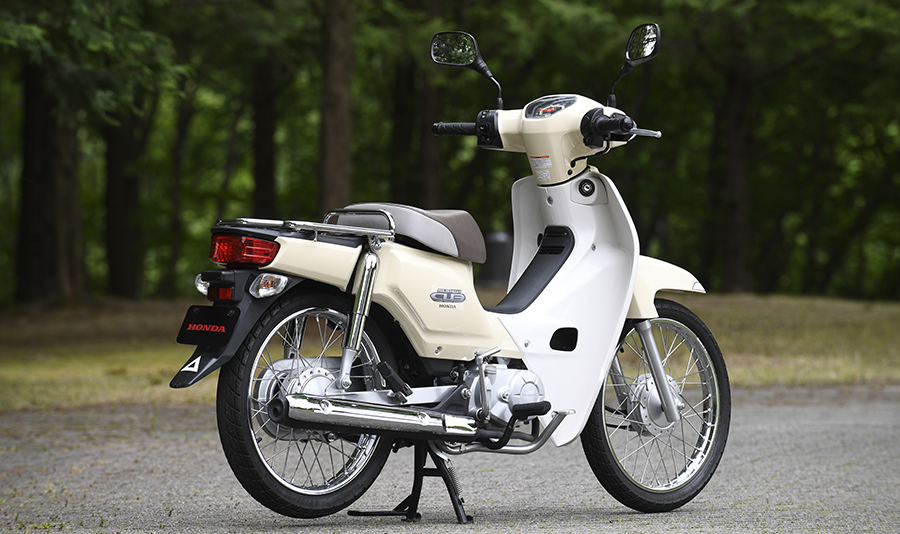 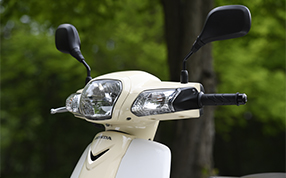 Headlight
Featuring a new front visage that was nearly identical to that of the Dream 110 released in Thailand in 2011—which became the base for the ‘Global Cub’— the new Super Cub 110’s styling elements were revised for Japan to give it more of a traditional Super Cub look, such as using a different color for the leg shields. 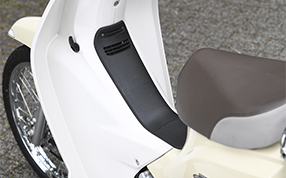 Leg Shields
The Super Cub’s original one-piece molded leg shields were changed to separate left and right pieces in response to requests from the Asian markets to reduce replacement costs should one side be damaged or scuffed up during use. 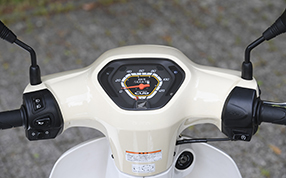 Speedometer
In giving the Super Cub a global layout that could be promoted worldwide, its instrument panel was redesigned to be larger and easier to read, and the positions of the horn and turn indicator switches on the left-side handlebar were reversed as compared to previous models.

A Crossover Between Daily Life and Fun Times 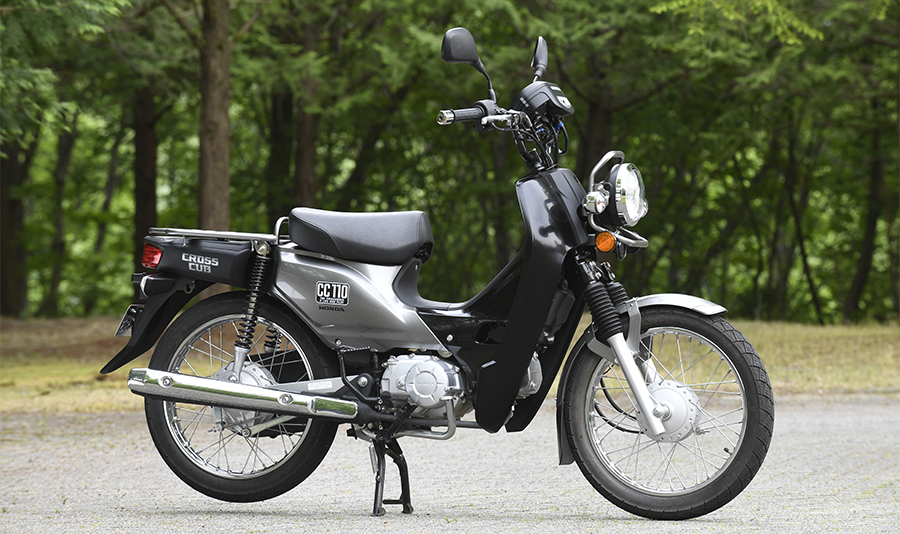 The Cross Cub (CC110) prototype was unveiled in November of 2012 at a Cafe Cub Meeting held in Welcome Plaza, which is located on the ground floor of Honda’s Tokyo Headquarters. Bringing together Super Cub fans from around the country, this new model—uniquely designed to set the future direction of the Super Cub—was revealed.

The word ‘Cross’ here refers to the crossover of daily life and leisure. Its design emphasized outdoor fun, with red or yellow bodywork, a shallower steel front fender, an additional right-side sidestand bracket and other features that closely resembled those of the CT, or ‘Hunter Cub’.

After appearing again at a motorcycle show in March of 2013, the Cross Cub officially went on sale in June of that year, embodying the same sense of fun that had long been a feature of the CT110 since its first debut in Japan in 1981. 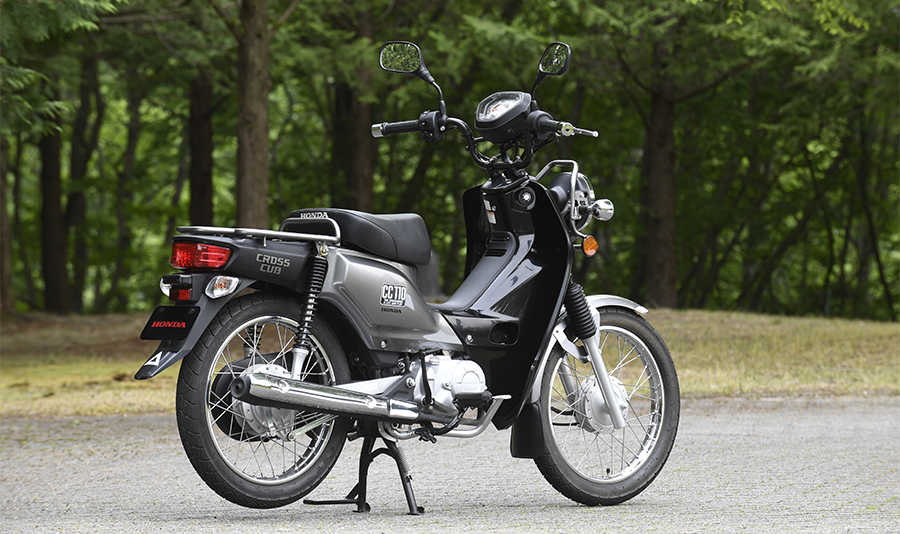 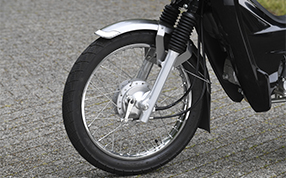 Front Wheel
The Cross Cub’s 17-inch front wheel was the same as the original Super Cub’s, although fitted with 2.75 inch wide tires inherited from the era of leisure-oriented Cubs, such as the 1964 CT200 Trail 90. Its rear drum brake was also increased in diameter to 130mm. 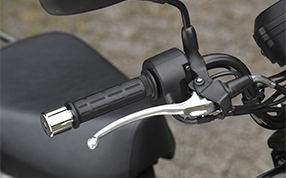 Brake Lever
The front brake lever was equipped with a locking feature that would have been familiar to those who had experience with other trail-type Cubs like the CT110. It was also fitted with large, chrome-plated bar ends 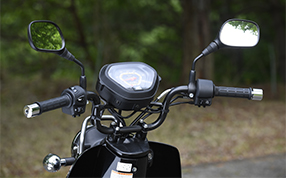 Speedometer, Handlebars and Headlight
A uniquely shaped meter case was attached to the Cross Cub’s wider black-painted raised handlebars. Inside, the ‘SUPER CUB’ logo was prominently displayed. The frame- mounted headlight was surrounded by a chrome-plated tubular frame.