The Super Cub soon became a regular fixture in numerous facets of Japanese society, including commuting, business and leisure. Responding to growing demand, Honda developed and released a succession of variations on the classic Super Cub. In Part 2, we introduce several notable models that were specially developed to meet specific market demands, and the model that become known as the mightiest Super Cub of all.

The Yellow Super Cub — Specially Made for Newspaper Delivery Work 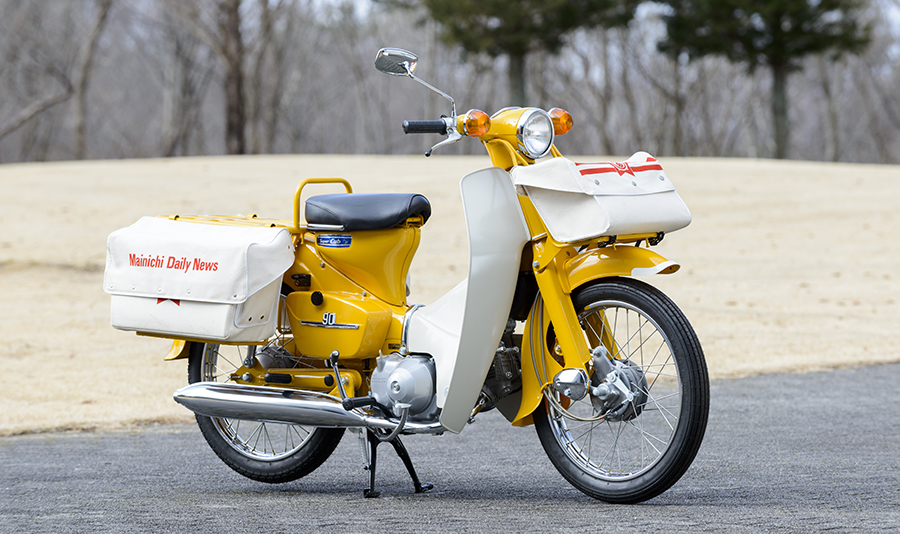 From the beginning, the Super Cub was built with delivery work in mind. For example, its automatic centrifugal clutch was designed to free riders from complicated clutch and gear shifting operations. It’s said that the automatic centrifugal clutch was inspired by Soichiro Honda, who conceived of the idea of making a bike to help Japanese noodle shops deliver their noodles.

First displayed as a concept model at the 1961 All-Japan Motor Show (Tokyo Motor Show), the C100 Super Cub newspaper delivery bike was fitted with cylindrical baskets mounted on its front, rear and sides that were large enough to hold 50 newspapers or more. Later, against a backdrop of high economic growth and the rapid expansion of delivery volume and coverage, a specialty Super Cub was released in response to requests from the Japan Newspaper Association and Newspaper Delivery Labor Saving Committee with a view toward reducing labor and improving the efficiency of newspaper delivery work.

Released in 1971, the News Cub was equipped with canvass bags attached to steel tube racks mounted front and rear, and a large rear carrier that together made it capable of holding between 300 and 350 newspapers. In step with its increased load carrying capacity, the News Cub was equipped with a large sidestand and powerful brakes. A bottom-neutral transmission made it possible to shift from first gear to second with a single motion. The News Cub’s bright yellow bodywork also enhanced visibility in the dim light of mornings and evenings. Configured in 50cc, 70cc, and 90cc displacements, all models were equipped with push-button electric start. 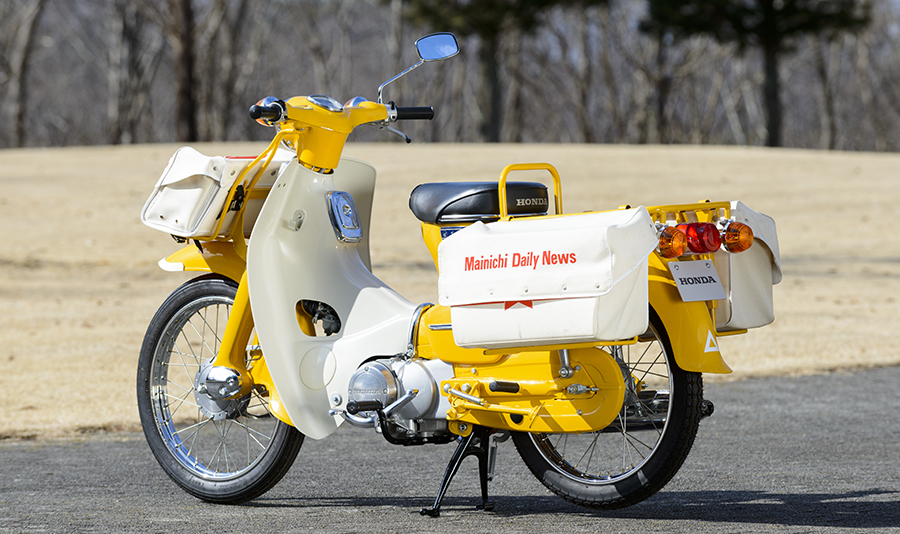 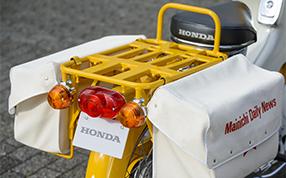 Rear Carrier
The large rear carrier was equipped with a stopper on the seat side. Indicators were moved to the sides of the taillight. Canvass bags were optional. 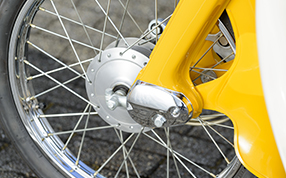 Front Wheel
Stronger front brakes were adopted for enhanced durability. As on the standard model, chrome-plated covers were featured on the 90 version. 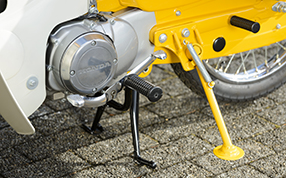 Sidestand
In consideration of the loads it would be carrying, a large, adjustable sidestand with a wide footprint was fitted, and a N-1-2-3 shift pattern was specially adopted. 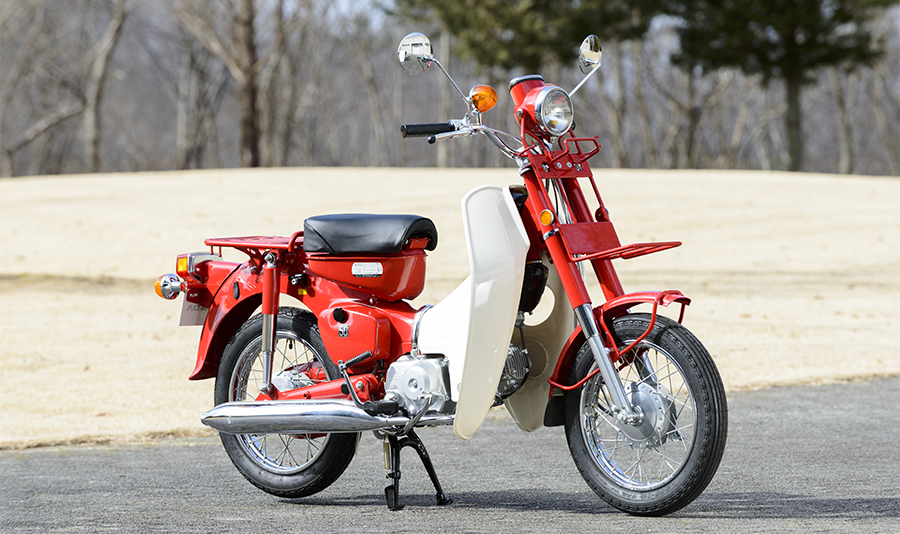 The mail in Japan had conventionally been delivered using bicycles and scooters. However, as mail volume increased in line with Japan’s surging economic growth, delivery vehicles offering greater durability and reliability became more in demand. In the 1960s, Japan’s Ministry of Posts consulted with manufacturers about the possibility of developing a specialized motorcycle model for use in delivering the mail. Of course, Honda was prominent among those manufacturers.

In 1967, Honda developed a special model for the Post Office based on the Super Cub, but with an OHC engine that offered enhanced durability. Initially, changes were limited to the addition of a larger rear carrier and a higher mounting position for the headlight. In response to voices from the field, Honda’s first MD (Mail Delivery) model—specially designed for Post Office use—was released in 1971.

Based on the Super Cub 90, the new machine was fitted with a telescopic front fork, tubular steel handlebars, and other detailed improvements. However, its biggest difference from the ordinary Super Cub was its smaller-diameter 14-inch wheels. Region-specific features such as a carburetor heater and heated handlebar grips were also made available. A 50cc MD model, which had a smaller load capacity than the 90 but could be ridden by more people due to relaxed licensing requirements, was launched in 1973 with the same options. Improvements have been made every year since, and, although not as common as before, MD Cubs can still be seen on Japan’s roads today. 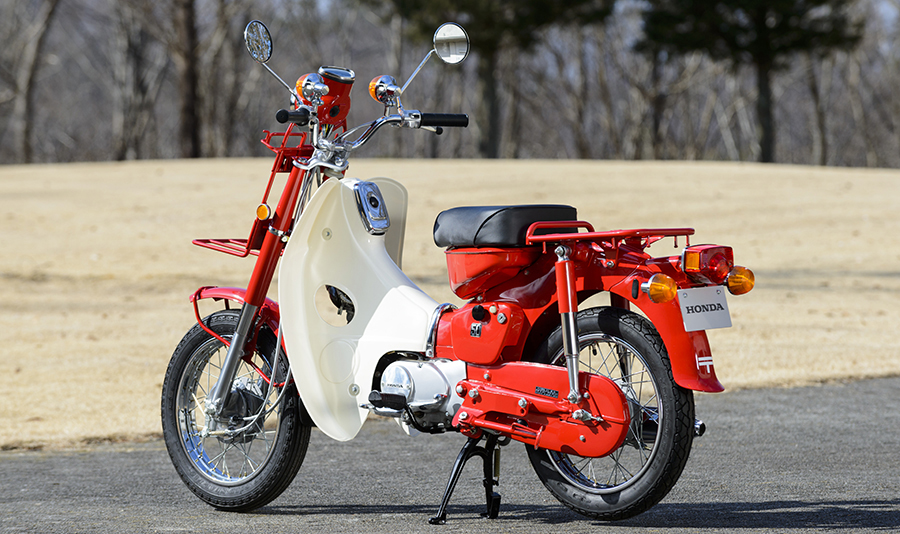 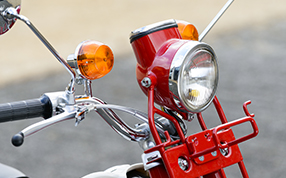 Headlight
The high-mounted headlight was integrated with the speedometer. The rugged front carrier was specially designed to allow bags to be slung over it with a single motion. 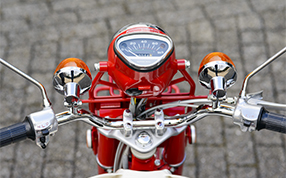 Speedometer
The speedometer was designed with the same inverted triangle shape seen on other Honda models. The tubular steel handlebars were also special items for the Post Office bikes. The right-side indicator switch was of a horizontal sliding type 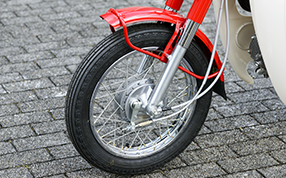 Front Wheel
Here again, Post Office specifications could be seen in the adoption of 14-inch wheels and a telescopic fork. Ample fender clearance was also secured, enabling a chain to be slung over. 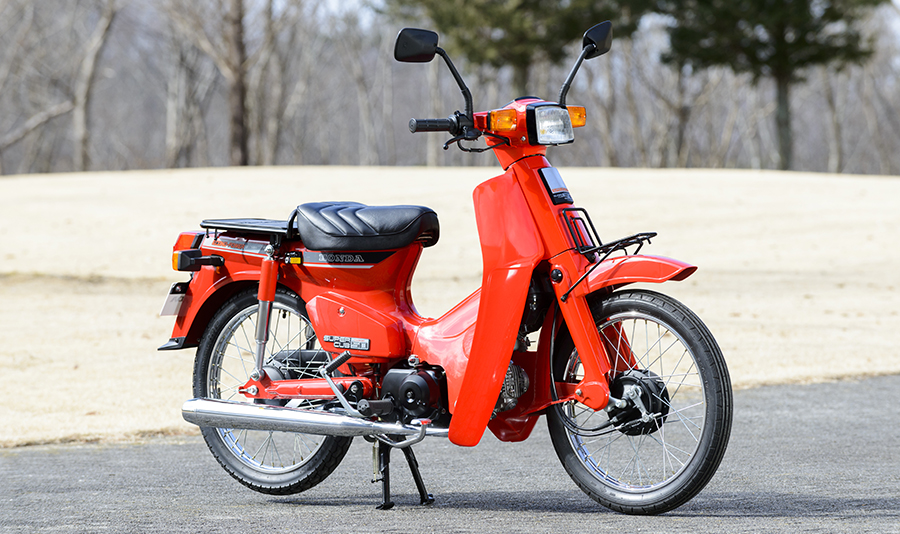 Entering the 1980s, and more than 20 years after the debut of the very first C100, changes began to occur, even on the Super Cub. Following the world’s second oil crisis, calls for ‘energy conservation’ were growing louder and, even though the Super Cub 50 had always been highly economical, a new Econo Power Engine offering better fuel economy and higher output was developed. Improvements included a new combustion chamber shape, and modified intake and exhaust tracts, as well as reductions in frictional losses, helping the new engine achieve fuel consumption figures of 105km/liter.

1982 marked the appearance of the Super Cub 50SDX. Its engine boasted a power output of 5.5PS, the strongest ever in the history of the Super Cub 50, and even higher fuel consumption figures of 150km/liter. It also mounted an angular headlight that was quite fashionable at the time.

The quest for higher fuel economy continued, resulting in mileage figures of 180km/liter by 1993. The Super Cub shown here is a 1982 model Super Cub 50SDX featuring bright Monza Red body coloring and a black engine, and equipped with a special seat and rearview mirror. 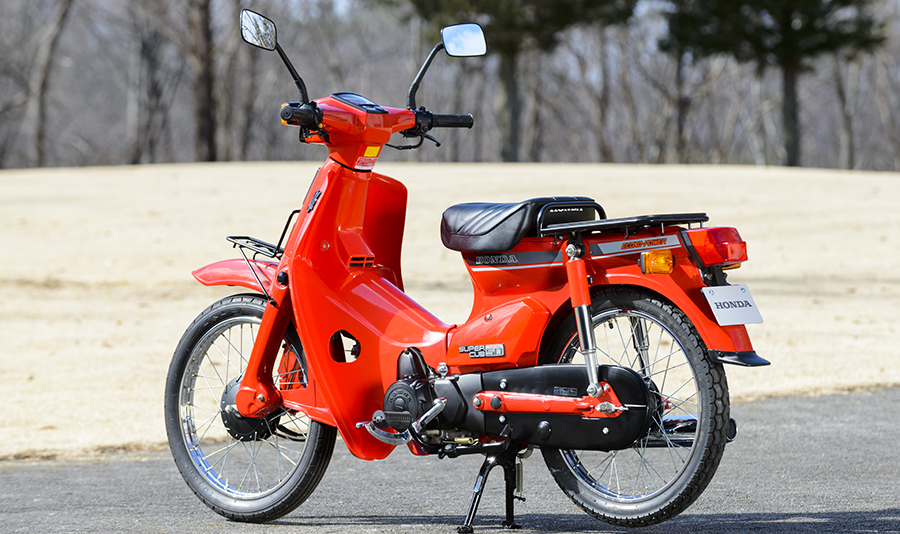 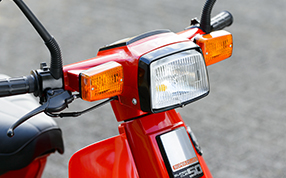 Headlight
In contrast to the standard Super Cub, an angular design was adopted for all parts, including the mirrors, turn indicators and headlight, which made up the face of the bike. 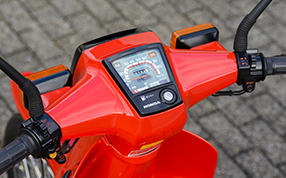 Speedometer
The squarish-shaped speedometer now also included an electric fuel gauge. The ignition switch was conveniently positioned in the lower part of the meter module, while the right-side turn indicator switch was of a traditional vertical sliding type. 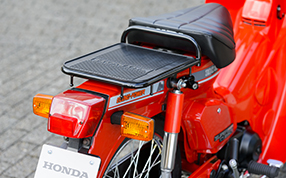 Taillight
An angular taillight was smoothly integrated into the Super Cub’s body design. The rubber mat on the rear carrier was a special feature of the ‘Red Cub’ shown in the photo. 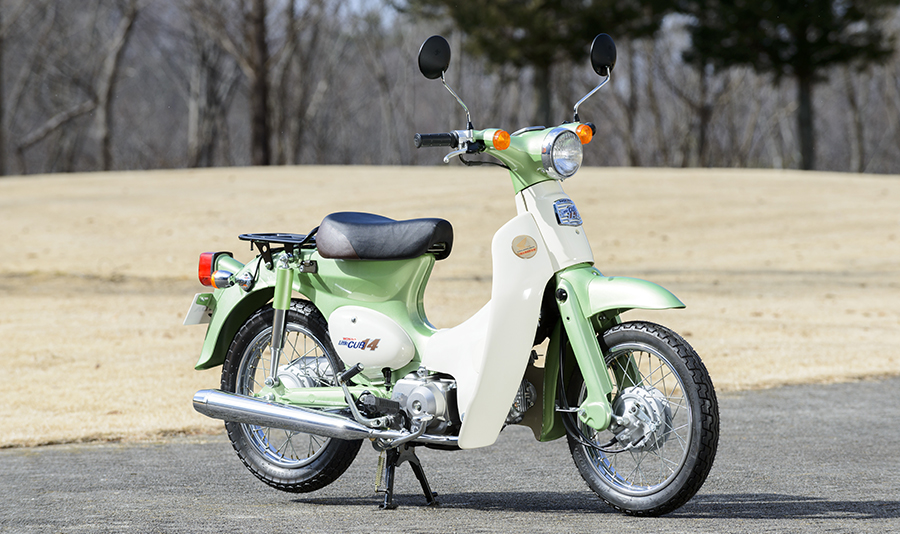 While the Super Cub received no major model changes after the mid-1980s, it instead entered a stable phase of maturation with the adoption of a 12V electrical system, a maintenance-free battery and ‘Tuffup’ puncture-resistant tire tubes, as well as the addition of a left-side mirror and a fuel gauge.

Around the mid-1990s, Japan was experiencing a ‘retro’ boom that saw nostalgic design touches appearing on both motorcycles and cars. The Super Cub had always been popular for its nostalgic styling among a certain cross-section of bike lovers, but now young people were starting to view older things through fresh eyes. The Super Cub reentered the spotlight as a trendy fashion item.

Then, a major change took place in 1997. Retaining the basic structure of the Super Cub’s engine, frame and bodywork design, the Little Cub debuted fitted with 14-inch wheels front and rear, which offered more comfortable foot placement and easier mounting and dismounting, as well as easier maneuverability. More than simply being cute and trendy, it is still the only Super Cub model to inherit such classic styling features as its wing-like handlebar cover, bottom-link front suspension, pressed steel chain cover, classic emblem-shaped speedometer, and vertical turn signal switch from the original. 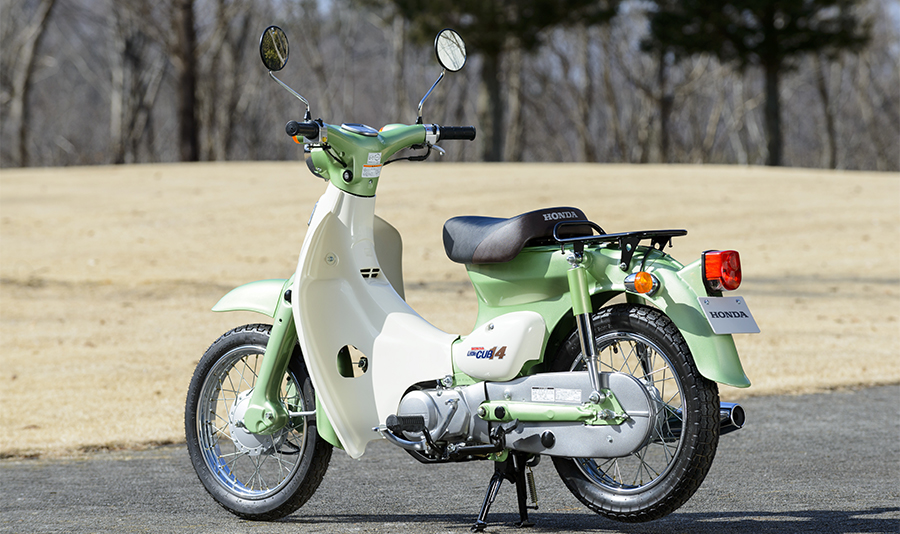 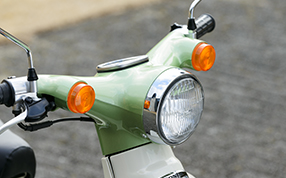 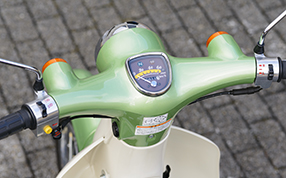 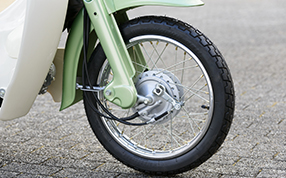 Designed to Respond to a Need — The Press Cub 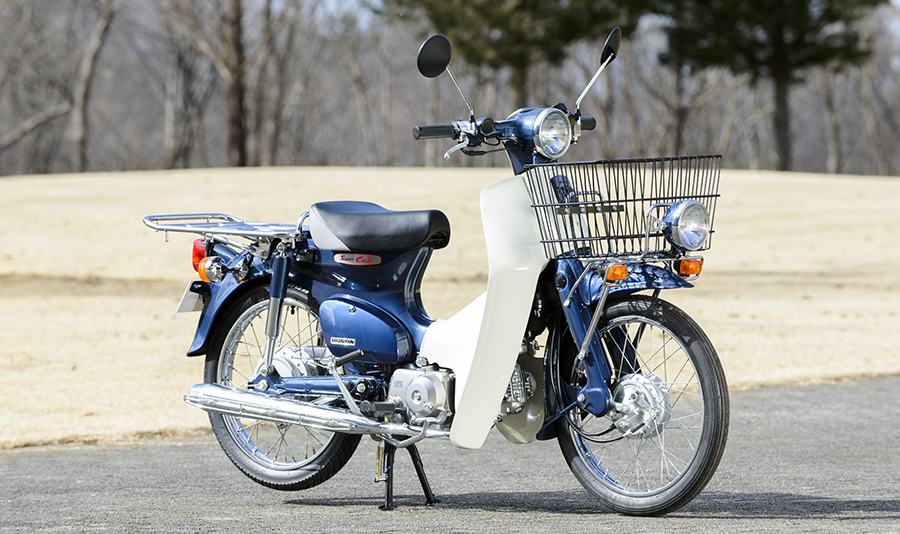 Although the News Cub, released in 1971, featured specifications designed to meet the specific needs of newspaper delivery riders, it failed to gain wide acceptance in the industry due to its heavy weight and high price. Even so, the Super Cub continued to be used for newspaper delivery work throughout Japan.

Later, in the mid-1980s, Honda released a custom-designed newspaper delivery model with an extra headlight mounted to its large front basket that could be easily switched on whenever big newspaper loads blocked the light coming from the main headlight. An immediate hit throughout Japan, like the Super Cub designed for the Post Office, top priority was given to user opinions when developing the Press Cub, which debuted in 1988 with this unique pair of headlights.

The Press Cub was also equipped with such rugged features as a top-neutral rotary transmission, a large rear carrier, large-diameter drum brakes, and a heavy-duty sidestand, yet weight increases were kept down to under 8kg while the price of the bike rose by only 15,000 yen. Third time lucky, the Press Cub soon became the benchmark for newspaper delivery models, and its latest iteration, called the Super Cub Pro, inherited virtually all of its original design ideas. 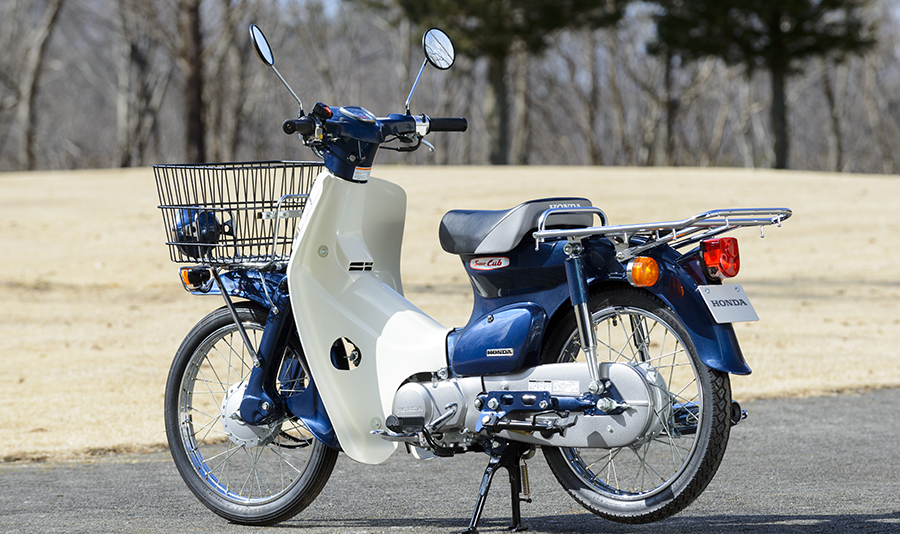 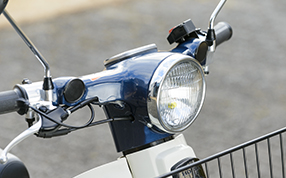 Position Lamp
In 1989, the Press Cub’s standard headlight was reconfigured as a hand-operable position lamp, which proved convenient for checking notes of delivery routes, as well as providing nominal illumination for dawn and dusk deliveries. 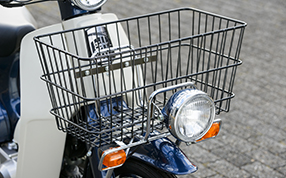 Headlight & Turn Indicators
Also in 1989, the front indicator lights were moved to beneath the basket, joining the now forward-mounted main headlight, while their lenses were changed to the squarish shape seen on other models. 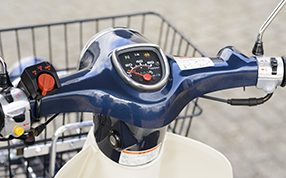 Speedometer
Since it was possible to shift to neutral while riding the Press Cub, a 3-speed gear position lamp was fitted. The large red switch on the left operated the grip heaters, which were included as a standard option on the Deluxe model.