The second chapter in the Super Cub story opens with an all-new OHC engine.

The history of the Super Cub has been a non-stop story of brilliance from its first launch in 1958 through to the present day. Of the Super Cub’s numerous variants over the years, we present here a selection of epoch-making models that have been preserved at the Honda Collection Hall as dynamic examples of its long-term success. This first selection comprises five models ranging from the 1958 debut model to 1971. 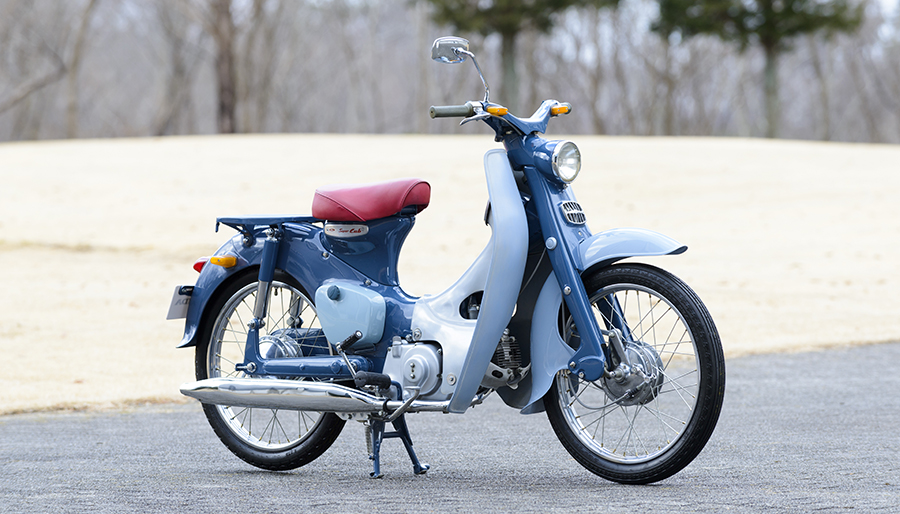 The Super Cub C100 was developed under the leadership of Soichiro Honda, founder and president of Honda Motor Company, as a next-generation commuter bike to replace the Cub F, which was essentially a small engine and fuel tank package designed to be attached to a common bicycle. A key theme in the development of the Super Cub was that it had be ‘accessible,’ and the primary goal was to make a compact motorcycle that could be easily operated by anyone.

Although, at the time, it was necessary to keep its price low, Honda elected to mount a relatively more expensive four-stroke engine rather than a more conventional two-stroke engine. This resulted in cleaner exhaust emissions, better fuel economy and strong power on par with contemporary 125cc class motorcycles. Moreover, the Cub’s automatic centrifugal clutch made it much easier for beginners to ride, while its smart, fully covered styling was practical and effective in protecting legs and feet from the splatter of water and road mud. In these important ways, the Super Cub represented a revolutionary departure from the conventional wisdom of the time.

Senior managing director Takeo Fujisawa, who oversaw sales and marketing at Honda, set an ambitious production and sales target of 30,000 units per month. Part of his reasoning was that Honda needed to cover the Super Cub’s higher production costs through increased volume, but above all he was convinced that the C100 Super Cub would be a big seller. It turned out that more than 1,000 units sold on the first day of its launch alone, and the Super Cub became such a hit that Honda soon needed to boost production to 60,000 units per month just to keep up with demand. In this way, the Super Cub became the driving force behind Honda’s rapid evolution into a global enterprise. 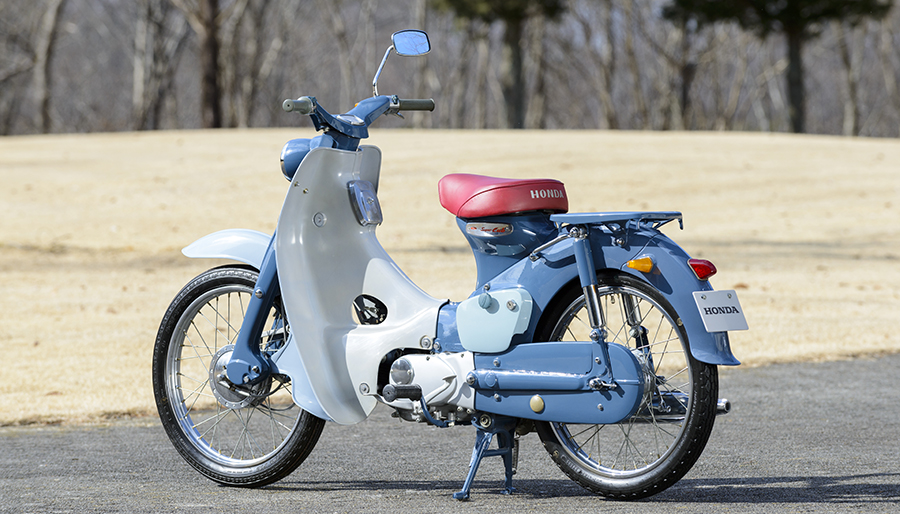 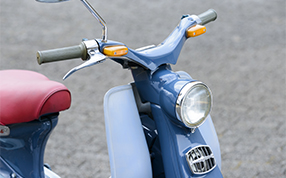 Handlebars & Front Visage
In every aspect, the Super Cub featured an aesthetically pleasing design, including its wing-like handlebars and brake lever. Produced at Honda’s Saitama plant, its light bluish gray plastic parts were also a distinctive feature of this early model. 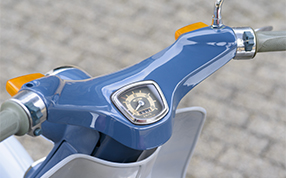 Speedometer
The speedometer showed a top speed of 80km/h. A unique feature of the first Super Cub was that a red line was drawn through the 25km/h mark. With the introduction of the C100, the range of the speedometer was further extended to 100km/h. 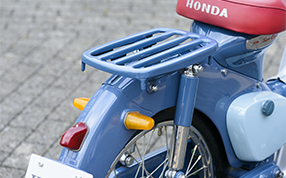 Turn Indicators & Taillight
The Super Cub came fully equipped with turn indicators, which was unusual for small motorcycles of the time. Even though it was limited to a necessarily small size, the careful thinking that went into its design was widely appreciated.

As Sales Grow, a New 90cc Model is Born 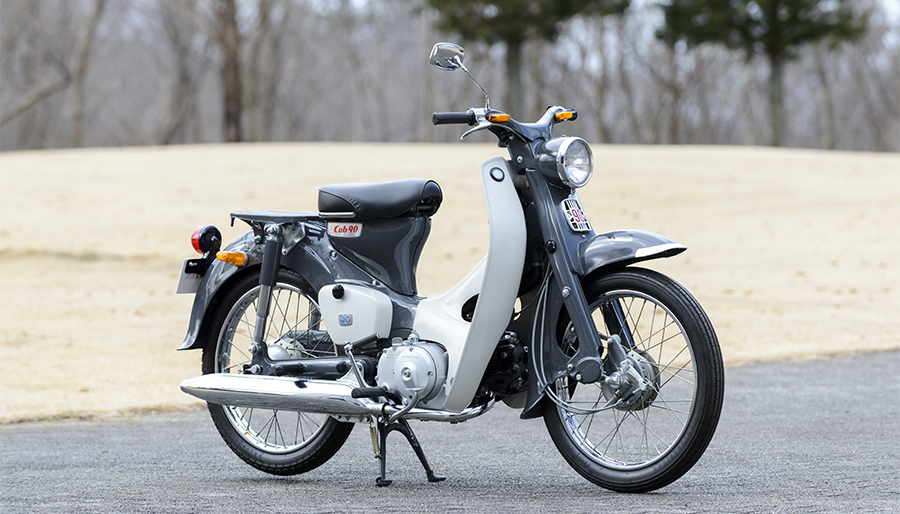 As Japan recovered from the years of post-war turmoil, it entered a period of rapid economic growth. The popularity of the Super Cub was reaching new heights, and demand grew so rapidly that aggregate production exceeded 3 million units by 1963. Since at the time private car ownership was a still lofty dream beyond the reach of most people, motorcycles of under 125cc in displacement and limited to a top speed of 45 km/h—yet easily used for both business and pleasure, and able to carry two people comfortably—became increasingly popular. Japan’s motorcycle companies competed to offer a diverse lineup of models.

In 1962, the C105 Super Cub was released with a 2mm larger bore for an increased displacement of 54cc. However, even stronger performance was needed. In response to this demand for more power output, the upper-range CM90 Super Cub was developed. Based on the 6.5 horsepower 87cc OHV single-cylinder engine with manual 4-speed transmission that powered the C200 Benly 90, the CM90 debuted at the 1964 Tokyo Motor Show equipped with a 3-speed automatic centrifugal clutch.

The Super Cub 90 was subsequently developed in line with the ongoing evolution of the series, and its unique design was maintained until 1980, when the engine was revised to power the Super Cub 70. The Super Cub 90, however, continued to rule as the top-of-the-range model of the Super Cub series. 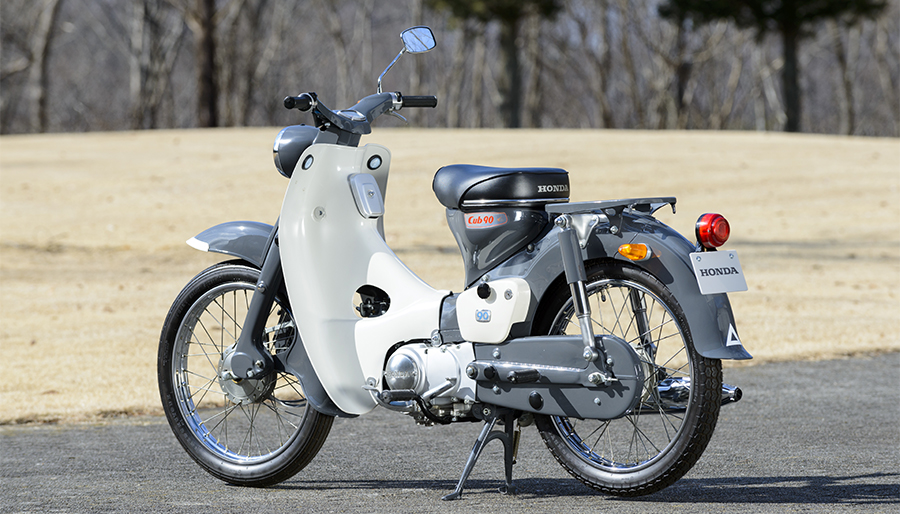 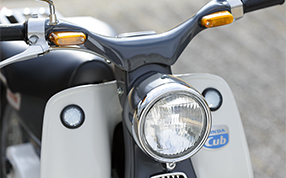 Front Mask
The Super Cub 90 had a slightly larger headlight than the C100. Its leg shield, too, was made using uniquely designed parts with reflectors attached. This model was initially called the Cub, minus the ‘Super’ prefix. 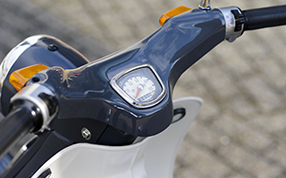 Speedometer
The speedometer was similar in style to that used on the C100, and showed a speed range extending up to 110km/h. Its odometer also displayed five digits in 100-meter increments. 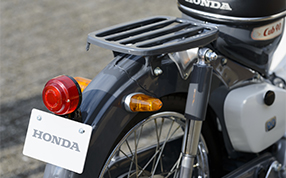 Taillight
The Cub’s rear carrier was similar in design to that of the C100, but larger and flatter on top. Also unusual for the Super Cub series was its round taillight. 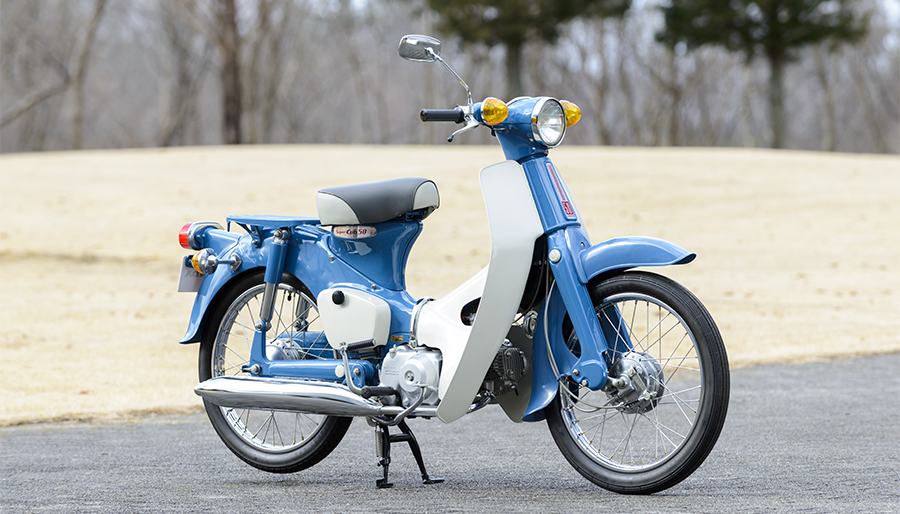 While receiving a series of minor modifications, the Super Cub was becoming a record-breaking hit, achieving total aggregate production of 5 million units without undergoing any major model changes. However, Honda didn’t remain complacent with this success, and embarked on the development of a new OHC engine in pursuit of greater durability, stronger power output and easier maintenance.

This new OHC engine was first mounted in the C65 Super Cub. Honda also introduced an unprecedented 2-year/50,000km long-term warranty plan. Safety features were further enhanced by enlarging the size of the taillight and turn indicators. In 1966, the Super Cub’s body design was revamped slightly, and the new OHC engine was adopted to the 50cc and 90cc models, marking the birth of a second generation of Super Cubs that covered all models.

The dimensions of the new engine and crankcase, etc. were matched to those of the earlier OHV engine to ensure that it could be manufactured on the same production line. Moreover, by equipping it with a new automatic cam chain tensioner and oil pump, etc., the engine’s durability and reliability were further enhanced to such an extent that it was claimed that the engine could keep on running even when nearly out of oil. At the same time, power output and fuel economy were further improved, ensuring that the Super Cub would go on to maintain an unassailable level of popularity. 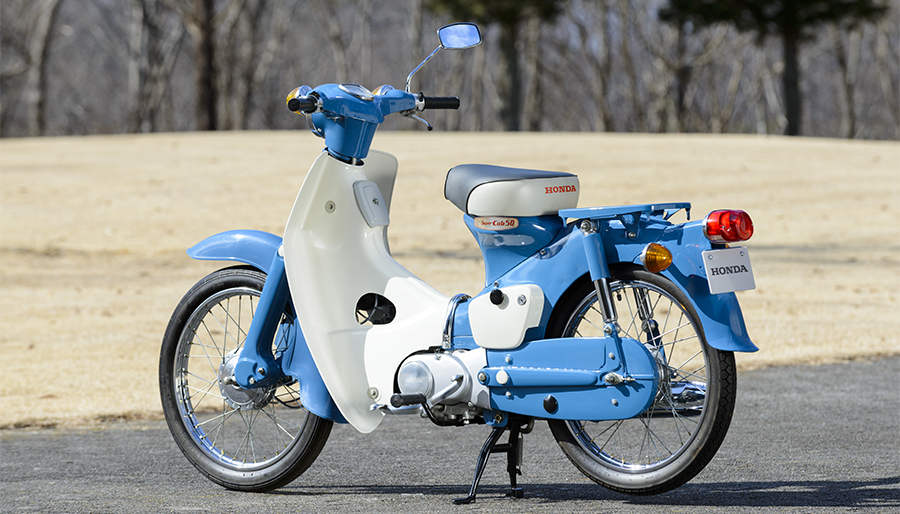 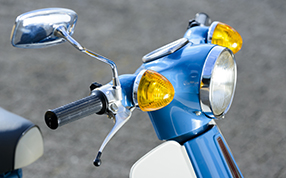 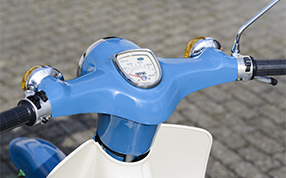 Speedometer
A larger new speedometer featured a new neutral lamp, and this attractive form was subsequently used on the Super Cub for many years to come. The headlight switch was also moved to a more convenient position on the handlebars. 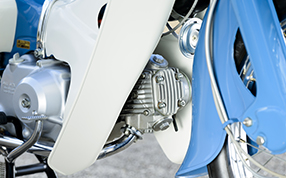 The World’s First Motorcycle Equipped with a Position Light 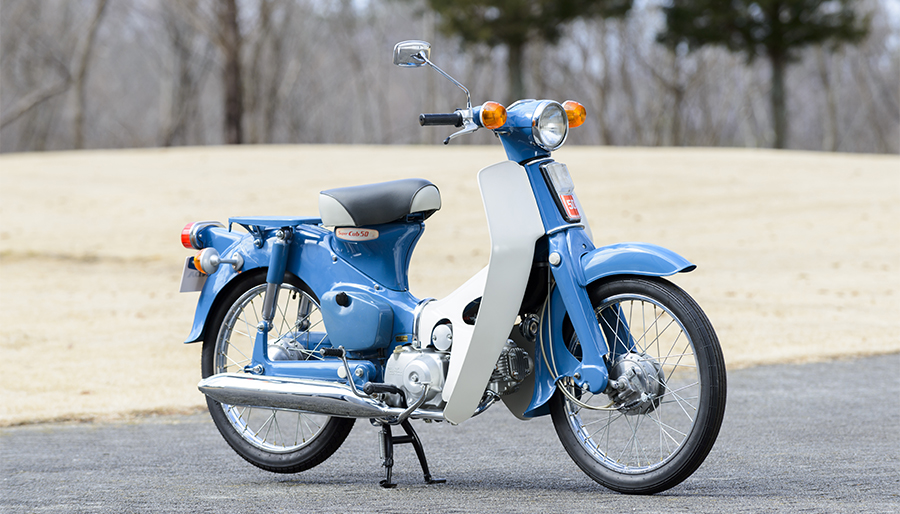 Powered by its new OHC engine, the Super Cub delivered even stronger performance, as well as higher quality and easier operation. Demand continued to grow, and in April of 1967 the Super Cub became the first single-cylinder motorcycle in the world to achieve cumulative production of 5 million units.

In January of 1969, with a view toward enhancing its perceived value, the production C50 received a model change that included adoption of the world’s first independent position light, a feature introduced earlier on the top-of-the-line C90.

This model further introduced other user-friendly features, including a horn button that could be pressed when stopped to turn on a small light beside the sidecover to illuminate the ignition key switch. At the same time, the right turn indicator (now with the same shape as the sports model CBs) would also light to illuminate the area around the handle lock.

The 63cc C65, which was originally released as an intermediate model positioned between the Super Cub 50 and 90, evolved into the 72cc C70 with an increase in the size of its cylinder bore. The next year, colorful red and yellow body colors were further added to ensure that the Super Cub retained its popularity well into the 1970s. 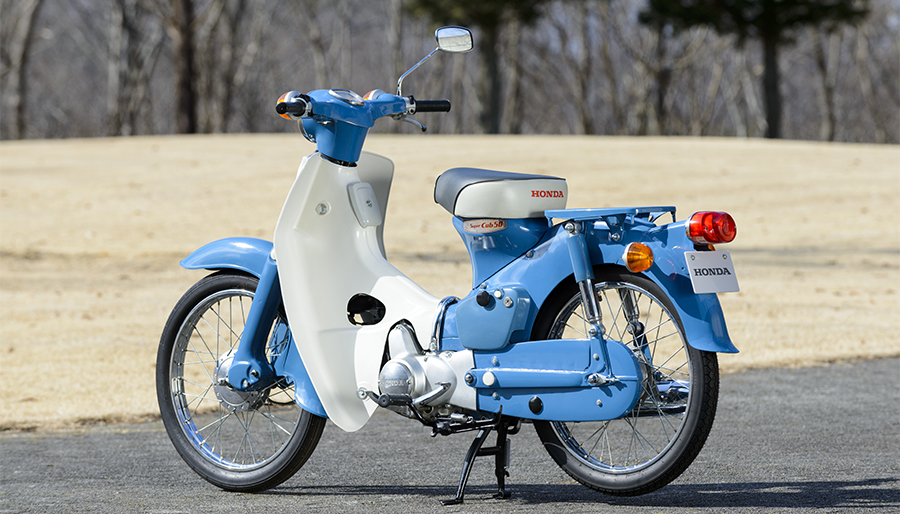 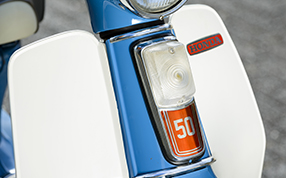 Position Lights
The biggest feature of the Super Cub was its position light, affectionately called the ‘lantern.’ The side cover was also fitted with a light for illuminating the ignition key switch. 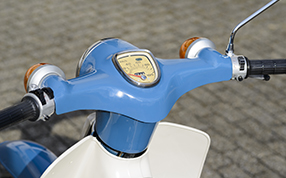 Speedometer
While the speedometer’s design did not receive any major changes, with the addition of the position light, a ‘P’ position was added to the light switch. 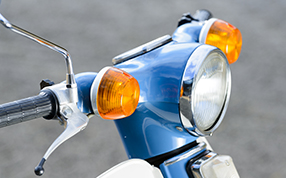 The Birth of the Deluxe Model, with Fully Integrated Bodywork 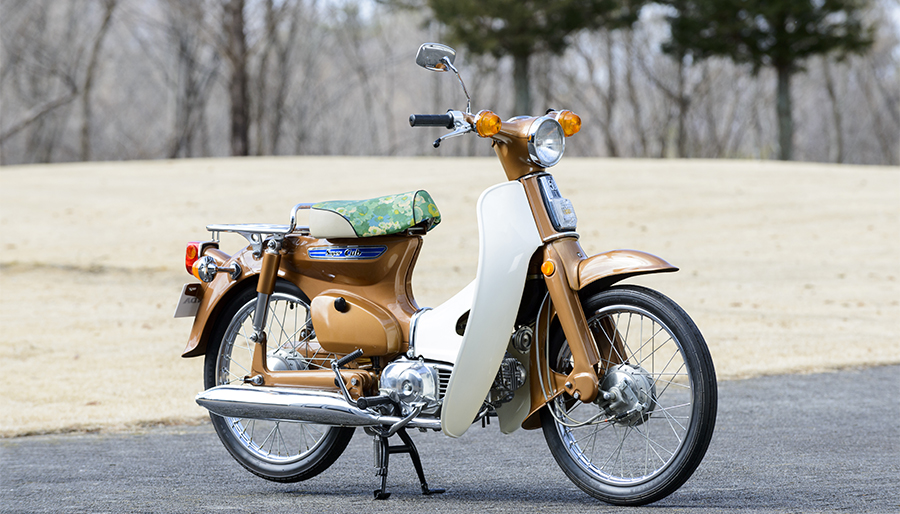 Until the Super Cub Deluxe debuted in 1971, the only variations offered on the Cub were a choice of three sizes of engine displacement and whether or not it was equipped with an electric starter. However, as Japan’s economy stabilized and the country became more affluent, demands for more ‘deluxe’ features grew louder. In response, a Deluxe model was added to the lineup in 1971. For this new model, the fuel tank—which had till then been separately mounted onto the body frame—was seamlessly integrated into the Cub’s pressed steel plate body.

Among the many improvements made to the Super Cub at this time, all of its metal body parts were coated in luxurious shades of metallic paint. Its handlebars were redesigned with an elegant flying seagull form, while leg shields, front fender, and the fins on the crankcase cover’s breather were given a smart, slimline appearance. Further, the brake light was reconfigured to light up when either the front or rear brakes were engaged, and the ignition key was moved to a more convenient location on the upper leg shield.

Export models featured a tandem seat among other features typical of the heady days preceding the 1973 oil crisis. This particular Super Cub Deluxe, featuring a gold-painted chassis and floral seat, was the 10 millionth motorcycle to be produced at Honda’s Suzuka plant, and thus was not actually offered for sale. 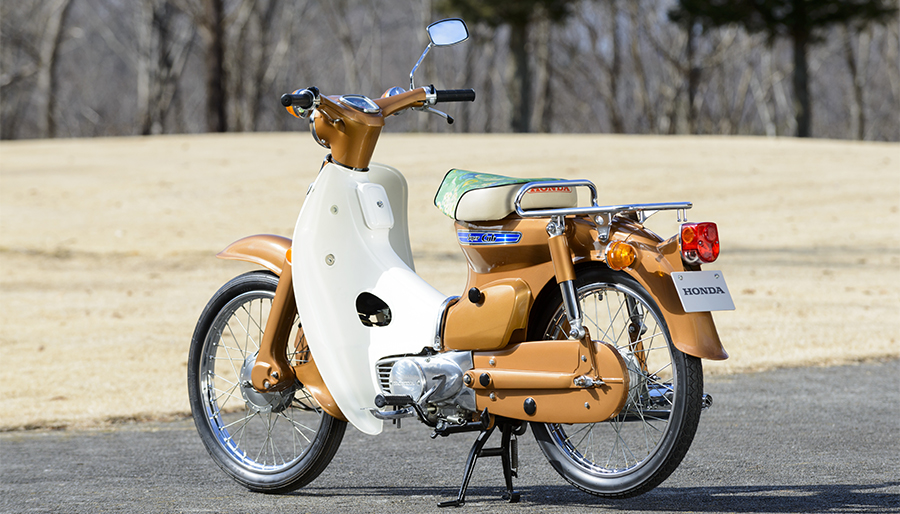 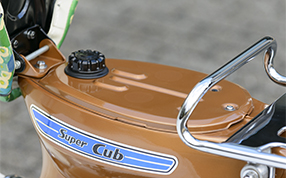 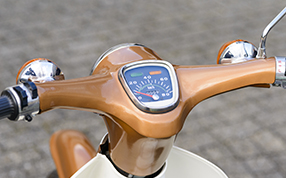 Speedometer
While the basic shape of the speedometer remained the same, the background color of its instrument panel was changed to black. A turn indicator lamp was also added. 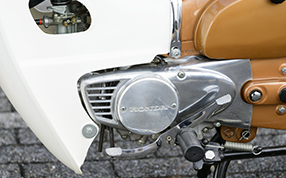 Engine
Air ducts were added to the side covers of the Deluxe version’s engine to enhance cooling and give a more attractive accent to its design.

*The video might not be played correctly due to the circumstances.