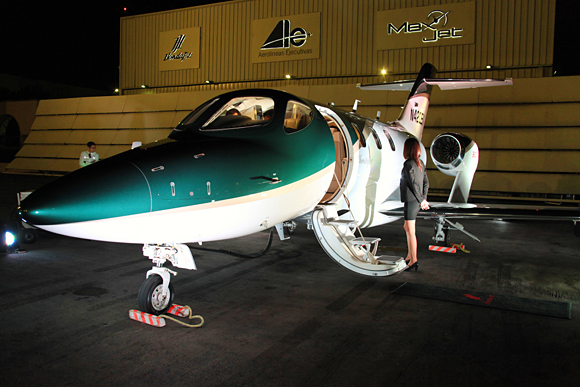 The world’s most advanced light jet also will make its debut at the 2016 Aero Expo, Mexico’s most prominent business aviation event. The trade show is being held at the Toluca International Airport from March 16 to 18 where a production HondaJet will be on static display.

To provide sales, service and support for customers in Mexico, Honda Aircraft has partnered with Aerolineas Ejecutivas – the largest executive aviation company in Mexico. Aerolineas Ejecutivas has been a pioneer in business aviation services since it introduced the first jet for executive charter service. The company’s expansive footprint includes operations in major cities including Toluca and Monterrey.

"It is a tremendous opportunity and a privilege to sell a world-class product like HondaJet that our customers will embrace," said Aerolineas Ejecutivas President Arturo Ortega Olive. "There are several business opportunities for HondaJet in the Mexico business jet market. We are excited to showcase this advanced light jet for the first time at Aero Expo."

The HondaJet incorporates advanced technological innovations that were developed from long-term research activities. The patented Over-The-Wing Engine Mount (OTWEM) configuration, natural laminar flow wing and nose, and composite fuselage deliver a superior combination of speed, comfort and fuel efficiency over other jets in its class.

The HondaJet is the fastest, highest-flying, quietest, and most fuel-efficient jet in its class. The HondaJet incorporates many technological innovations in aviation design, including the unique Over-The-Wing Engine Mount (OTWEM) configuration that dramatically improves performance and fuel efficiency by reducing aerodynamic drag. The OTWEM design also reduces cabin sound, minimizes ground-detected noise, and allows for the roomiest cabin in its class, the largest baggage capacity, and a fully serviceable private aft lavatory. The HondaJet is equipped with the most sophisticated glass flight deck available in any light business jet, a Honda-customized Garmin® G3000 The HondaJet is Honda's first commercial aircraft and lives up to the company’s reputation for superior performance, efficiency, quality and value. The HondaJet received U.S. Federal Aviation Administration type certification and entered service in December 2015.