OSHKOSH, Wis., U.S.A., July 29, 2013 - Two HondaJets made their first public debut today at the Experimental Aircraft Association's (EAA) AirVenture Oshkosh 2013. The Federal Aviation Administration (FAA)-conforming HondaJets, one red and one blue, concluded the day with another first: a flight demonstration that included a picturesque formation flyby. The aerial salute served as a tribute to EAA AirVenture Oshkosh and the more than 500,000 attendees who gather annually to celebrate aviation. 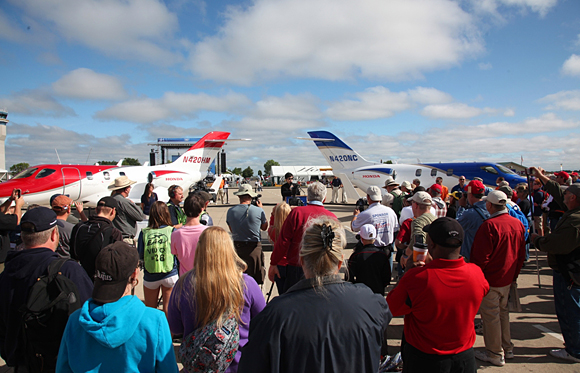 "EAA AirVenture Oshkosh has special significance for me. This event is where I introduced the proof-of-concept HondaJet to the world for the very first time. It was truly the beginning of Honda's exciting venture into aviation," said Honda Aircraft President and CEO Michimasa Fujino. "I am very excited that EAA AirVenture Oshkosh has once again provided the setting for the first public appearance and demonstration flight of not one, but two FAA-conforming HondaJets."

"EAA AirVenture is an annual celebration of both the past and future of flight," said Jack J. Pelton, Chairman of the Board for the Experimental Aircraft Association. "We are watching Honda's pioneering efforts with the HondaJet with great interest and enthusiasm. We welcome the aircraft to Oshkosh as Honda shares it with the world's flying community."

The third FAA-conforming HondaJet joined the program in November 2011 and is being used for mechanical system testing. This testing has included the brake control system, nosewheel steering, and flight controls. This aircraft was also used for hot weather testing conducted in Yuma, Ariz, and traveled to the NASA Wallops Flight Facility in Virginia for "wet runway" water ingestion testing to examine the effects of water spray.

The fifth conforming HondaJet joined the test program in May 2013 and is being used for cabin system testing, interior testing, and options testing. It will also be used for FAA function and reliability (F&R) testing. It is the first HondaJet to be equipped with a production interior and is anchoring the final leg of the flight test program.

The HondaJet is the world's most advanced light jet, and its design incorporates advanced technologies and concepts. The HondaJet Over-The-Wing Engine Mount (OTWEM) configuration, natural-laminar flow wing and fuselage nose, and composite fuselage were developed from long-term research activities. These combined innovations make the HondaJet the fastest, most spacious and most fuel-efficient jet in its class.

Honda Aircraft Company is targeting the end of 2014 for FAA certification of the HondaJet. The $4.5 million light jet seats up to six in a standard configuration (one crew and five passengers or two crew and four passengers) and includes a private aft lavatory. 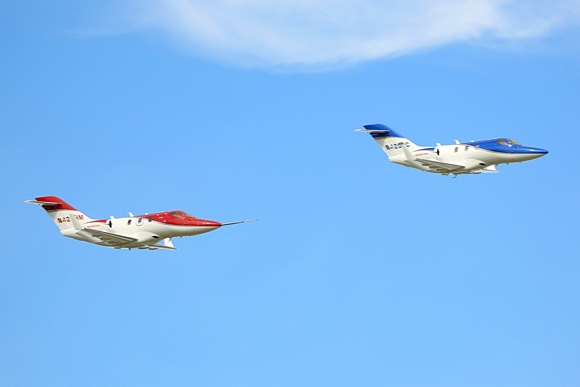 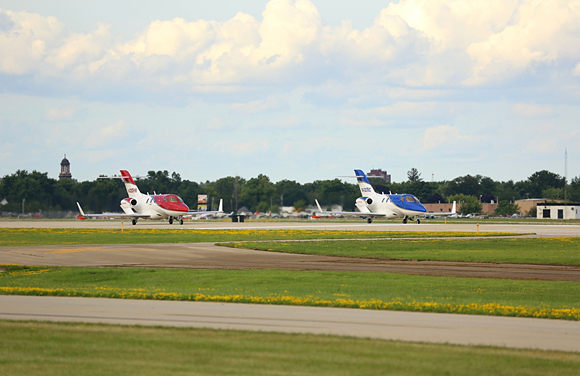