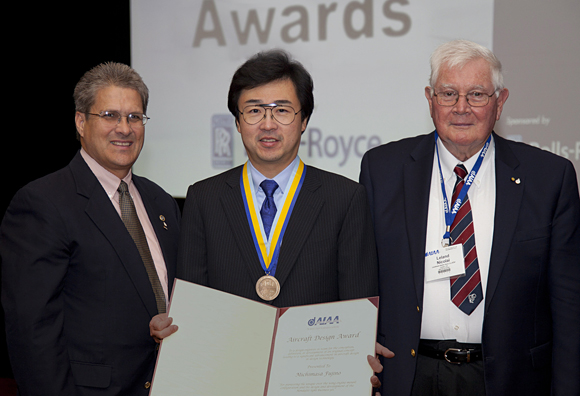 Fujino received the award on Sept. 18th at a luncheon held as part of the 12th AIAA Aviation Technology, Integration and Operations (ATIO) Conference and the 14th AIAA/ISSMO Multidisciplinary Analysis and Optimization Conference, running Sept. 17 – 19 at the Hyatt Regency, Indianapolis, Ind.

The AIAA Aircraft Design Award honors a design engineer or team for the conception, definition or development of an original concept, or career contributions leading to significant advancement in aircraft design or design technology. According to the AIAA, Fujino is being recognized for "pioneering the unique optimum Over-The-Wing Engine Mount (OTWEM) configuration that reduces wave drag and increases drag divergence Mach number. This unique Over-The-Wing Engine Mount configuration significantly increases cruise efficiency and, at the same time, maximizes cabin space without increasing the size of the aircraft." During development of the HondaJet, Fujino published several technical papers on theoretical design methods and experimental results to prove this unique design concept. He also contributed to AIAA by presenting several lectures on aircraft design and development at universities and industry conferences.

Fujino said, "The AIAA aircraft design award is the highest honor, and I am honored by this recognition. I am so glad that HondaJet's unique Over-The-Wing Engine Mount technology is acknowledged as a significant technological advancement for aircraft design. On behalf of the entire HondaJet team, I would like to express our appreciation to everyone who supports this HondaJet project as we continue our endeavor to deliver the world's most advanced light jet."

Past recipients of the award include Joseph Sutter for the Boeing 747, Harry Hillaker for the F-16, Burt Rutan for the Voyager, and Leland Nicolai for AGM-129/ACM.

Fujino added, "As a leading mobility company, Honda will continue to invest in future innovations and contribute to the evolution of advanced technologies. Our goal is to be a company that society wants to exist. The development of the HondaJet, and its innovative Over-The-Wing Engine Mount design, has been one of those revolutionary engineering processes at Honda."

With 35,000 members, AIAA is the world's largest technical society devoted to the progress of engineering and science in aviation, space and defense. 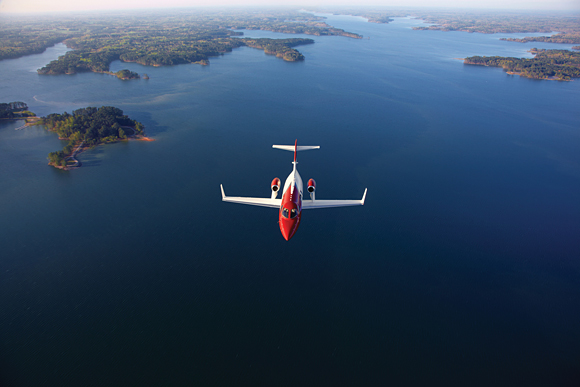 The HondaJet is the result of over 20 years of aviation research. Key HondaJet innovations include the optimal Over-The-Wing Engine Mount configuration to reduce drag, natural-laminar flow (NLF) technology and an advanced composite fuselage.