GREENSBORO, North Carolina, U.S.A., February 9, 2007 – Honda Aircraft Company, Inc., announced plans to establish its world headquarters in Greensboro, North Carolina, with construction of a new 215,000 square foot headquarters facility and hangar at Piedmont Triad International (PTI) airport. The company also confirmed plans to manufacture its advanced light jet, HondaJet, at a new plant to be constructed adjacent to its new headquarters. Further details about the production facility, including the size, scope of operations and construction timetable, will be announced at a later date. Honda plans to begin delivery of HondaJet to customers in 2010. 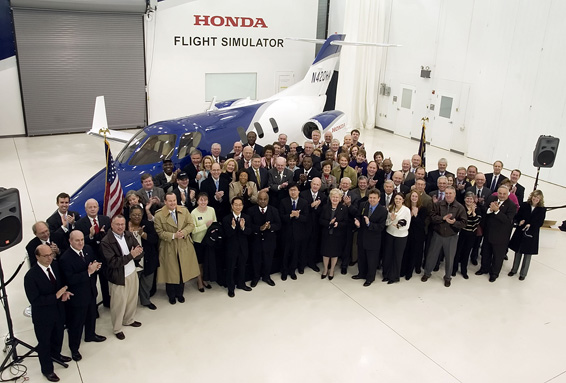 Total Honda Aircraft Company employment, including all engineering, sales and marketing, manufacturing and support activities, will increase to more than 300 associates by the time the manufacturing plant reaches full capacity.

"For five years, Greensboro has served as the home of HondaJet, as we have worked to take our dream from the drawing board to the sky," said Michimasa Fujino, president & CEO of Honda Aircraft Company, Inc. "As we move steadily toward certification, production and delivery to our customers, I am excited that Greensboro will be home both to our company's world headquarters and the production of HondaJet."

Honda Aircraft Company's new headquarters will serve as the home for all HondaJet research, product engineering, sales and marketing, and service support, and will replace the company's existing 32,000 square foot hangar and office complex, also located at PTI airport. Construction of the new facility, to include a 147,000 square foot airplane hangar and approximately 68,000 square feet of office space, will begin immediately, and is scheduled to be completed in November of this year.

HondaJet employs a number of innovative new technologies and design features - including an all composite fuselage and a unique over-the-wing engine mount (OTWEM) configuration - to set new standards for performance, comfort and quality in the growing "light jet" segment of the market.

Honda's first-ever commercial aircraft lives up to the company's reputation for superior fuel efficiency, delivering 30-35 percent better cruising fuel efficiency than comparable jets, along with a class-topping cruise speed of 420 knots (450 mph) and a more spacious cabin with room for up to eight people. The customer base for HondaJet is composed of owner-pilots, corporate travel operators and air taxi companies. In November, Popular Science magazine selected HondaJet as the winner of the publication's 2006 "Best of What's New" award in the Aviation & Space category.

All major assembly and testing of the prototype HondaJet has been conducted at the company's existing Greensboro facility, which opened in 2001 as an extension of Honda's global R&D operations. The decision to commercialize HondaJet was announced in July 2006, followed by the establishment of Honda Aircraft Company, Inc. on August 4, 2006. The company has received well more than 100 customer orders for the $3.65 million HondaJet since its launch on October 17, 2006.