Torrance, Calif. / OSHKOSH, WI, U.S.A., June 22, 2005– The Experimental Aircraft Association (EAA) and Honda announced today that the experimental HondaJet will make its world debut on July 28, 2005, at EAA AirVenture in Oshkosh, Wis., the weeklong event that is the largest annual aviation gathering in the world. 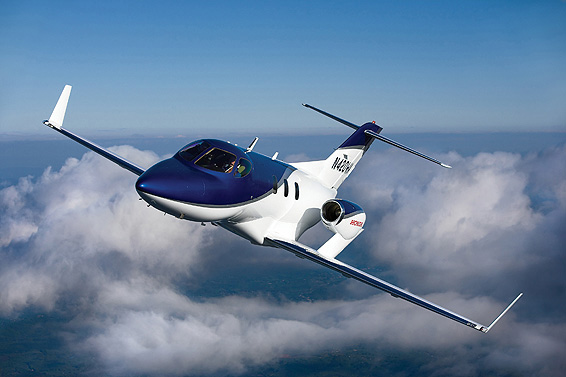 The HondaJet is powered by two Honda HF-118 engines optimally positioned on the upper surface of the wing in a unique configuration that reduces drag at high speed to improve fuel efficiency.  This unique layout also eliminates the need for structural engine mounts on the fuselage, creating more space in the fuselage than in conventional aircraft.  Other innovations include a natural-laminar flow (NLF) wing, which achieves low drag coefficient and high maximum lift coefficient, a fuselage nose that helps achieve a low drag coefficient, and an advanced light-weight all-composite fuselage.

“Aviation has long been a dream for Honda, and the HondaJet is the embodiment of that dream,” said Michimasa Fujino, HondaJet  project leader and vice president of Honda R&D Americas, Inc. “We chose EAA AirVenture for the HondaJet’s world debut in the pure spirit of our passion for aviation, and to share our new technology with the aviation community from a research and development standpoint.”

The experimental HondaJet has been conducting test flights since December, 2003 from its base at Piedmont Triad Airport in Greensboro, N.C. The HondaJet’s world debut at EAA AirVenture represents the HondaJet’s first public flight and first major exposure to aviation enthusiasts and the aviation media.

“EAA AirVenture has become the world’s greatest aviation celebration because it is an event that truly embodies the passion that people have for every kind of flight,” said EAA President Tom Poberezny.  “That’s why we’re excited to have the HondaJet make its world debut here.  The people who come to EAA AirVenture understand and appreciate Honda’s passion and spirit of innovation in this project.  It is the perfect location to showcase HondaJet and what could be coming in the second century of flight.”

EAA, The Leader in Recreational Aviation, is an international association with 170,000 members and 1,000 local Chapters.  EAA AirVenture Oshkosh is the world’s greatest aviation celebration and EAA’s yearly membership convention.  In 2005, it will be held July 25-31 at Wittman Regional Airport in Oshkosh, Wis.  For more information on EAA and its programs, call 1-800-JOIN-EAA (1-800-564-6322) or www.eaa.org.  EAA AirVenture information is also available at www.airventure.org.