Geneva, Switzerland, May 13, 2012 - Honda Aircraft Company announced that its fourth conforming HondaJet aircraft, referred to as "F3," successfully completed its first flight last week on May 4, 2012. This first flight milestone was a key highlight amongst many, in an overall program update the company reported in a briefing at the European Business Aviation Convention and Exposition (EBACE) in Geneva, Switzerland, underscoring the HondaJet's progress and momentum toward certification. 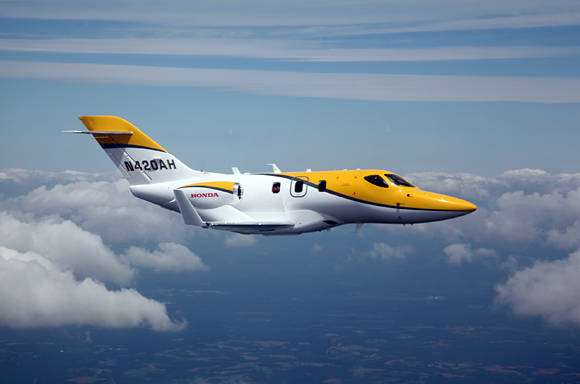 Honda Aircraft Company announced the successful first flight of F3, the fourth FAA-conforming HondaJet, seen here in the skies above the Piedmont Triad Region of North Carolina, on May 4, 2012.

The F3 aircraft, painted in a unique and striking yellow and white signature HondaJet paint scheme, began its first flight with engine startup at 10:40 am Eastern Time and lift-off at 10:57 am, on May 4, 2012, from Honda Aircraft Company's world headquarters at the Piedmont Triad International Airport in Greensboro, North Carolina.

Stefan Johansson, pilot-in-command, and Howard Judd, co-pilot, completed several checks during the flight, including: takeoff and climb; landing gear and flap operations; aircraft handling; air data system checks; and an Instrument Landing System approach using the flight director. Overall, the aircraft performed smoothly during its 74-minute flight, according to the pilots and telemetry teams, flying as high as 11,500 feet and as fast as 313 Knots True Air Speed (KTAS).

"The first flight of F3 shows the steady advancement on our course toward delivering to our customers an aircraft that offers not only superior performance, efficiency and comfort, but also superior quality," said Michimasa Fujino, President and CEO of Honda Aircraft Company. "We continue to see refinement in reliability and quality of our aircraft. We are successfully establishing our manufacturing foundation and process that contribute to creating high quality product, as well as to a great flying performance and experience, as our pilots report from just our first week of flying F3."

Honda Aircraft has now completed four FAA-conforming aircraft. Three of these aircraft are in its flight test fleet, plus one additional aircraft is in its structural ground test program. Earlier FAA-conforming HondaJet flight test aircraft have already achieved key benchmarks that meet or exceed the aircraft's designed performance goals of a maximum speed of 420 KTAS, maximum cruise altitude of 43,000 feet, climb rate of 3,990 feet per minute, and more.

The F3 aircraft is to be used primarily for avionics and electrical system flight testing elements within the HondaJet certification program. The aircraft has begun its test mission work in earnest.

"With regard to our new color choice for F3, yellow may be unconventional for a business jet, but the HondaJet is a new generation, advanced light jet with high performance and efficiency." continued Fujino. "HondaJet represents sportiness with high efficiency, so my choice of this special yellow for F3 expresses Honda's passion for, what we call, our ‘sports car in the sky.'" 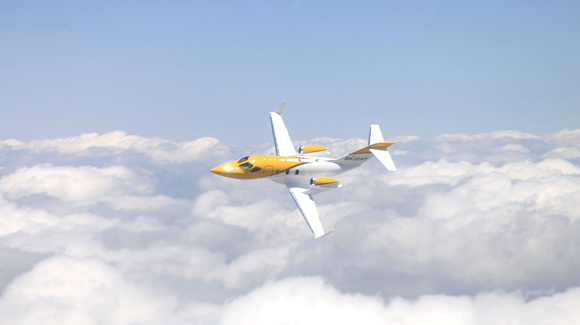 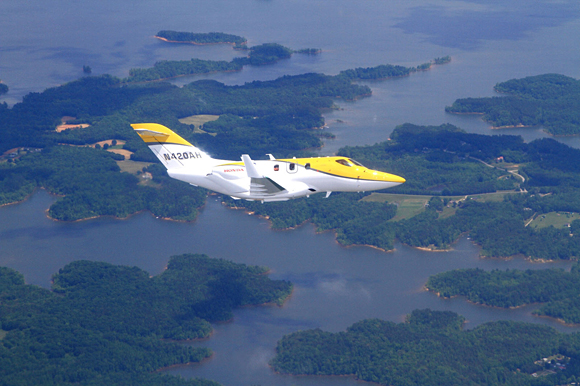