LAS VEGAS, NV, U.S.A., October 10, 2011 -Honda Aircraft Company, along with senior officials from the State of North Carolina and the Greensboro Economic Development Alliance, today announced Honda's selection of Greensboro, North Carolina, as the location for its new HondaJet Maintenance Repair and Overhaul (MRO) facility. The company will invest an additional $20 million to build the new MRO facility, bringing its total capital investment for construction of its North Carolina facilities to more than $120 million. 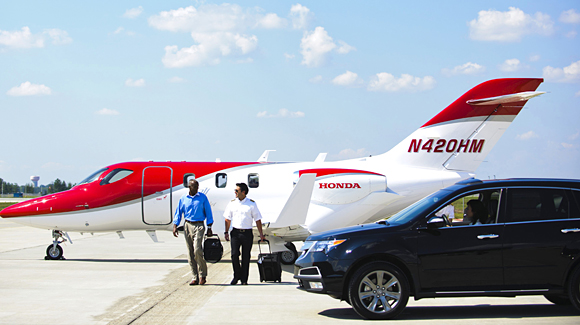 Honda Aircraft's MRO facility will provide services for HondaJet owners that complement the services they receive at facilities across its HondaJet dealer network in North America and Europe. These services include heavy maintenance services, such as extensive repair or overhaul work best provided by the aircraft OEM. This MRO plan demonstrates Honda Aircraft's focus on providing an unsurpassed ownership service experience for HondaJet customers from the very first customer delivery.

"We intend to offer HondaJet customers an overall ownership experience that is second to none in business aviation and one that is commensurate with all the best attributes of Honda," said Michimasa Fujino, President and CEO of Honda Aircraft Company.

"After a rigorous evaluation of various site alternatives, we concluded that we could best serve our customers and complement HondaJet dealer service facilities by placing our MRO facility here in North Carolina, where we are delighted to begin writing this next chapter of our growth," said Fujino. "This will also reinforce Honda's contribution and support to continue developing the aviation and aerospace cluster in the Piedmont Triad Region."

Honda Aircraft will expand its already substantial presence at the Greensboro Piedmont Triad Airport (PTI) with this new MRO facility. The MRO facility will be an expansion of the company's World Headquarters campus, where its state-of-the-art R&D, Manufacturing and Headquarter buildings today encompass more than 500,000 square feet of space on approximately 80 acres.

"Honda's decision to expand their Greensboro facility validates the strength and vitality of our aviation cluster, and their plan to invest an additional $80 million and create 419 more high-paying jobs demonstrates Honda's commitment to our community and to the entire State of North Carolina," said Dan Lynch, President of the Greensboro Economic Development Alliance. "We have 180 aerospace companies in the state employing more than 9,500 workers, but Honda Aircraft Company is the crown jewel."

"My top priority is creating jobs and it's clear that we've got momentum when global companies like Honda Aircraft Company decide to expand operations in North Carolina," said Gov. Perdue. "North Carolina is attractive to companies because of our skilled workforce and excellent business climate. This will enhance our aerospace cluster in the Triad."

"No matter where I go in North Carolina, the issue everyone talks to me about is jobs," commented U.S. Senator Kay Hagan. "That is why today's announcement is so important for North Carolina and for Greensboro. I am thrilled that Honda Aircraft will be bringing an additional 400-plus high-paying jobs to Greensboro."

Design of the MRO facility, which is expected to encompass more than 80,000 square feet, will be finalized in the first quarter of 2012, with construction scheduled to begin in the second quarter of 2012, and occupancy to begin in the first half of 2013. This timing supports the HondaJet's scheduled certification and entry into service in mid-2013.