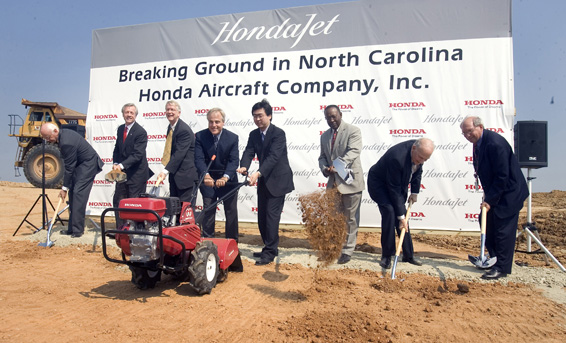 "By breaking ground for this new Honda Aircraft facility today, we take the next important step in getting HondaJets into the skies tomorrow," said Michimasa Fujino, president & CEO of Honda Aircraft Company, Inc. "With the warm reception we have received in the Triad, and the great response HondaJet has received from our customers, we are confident of a very bright future here in North Carolina."

HACI will manage the research, development, sales, marketing and manufacturing* of the advanced light jet, HondaJet, at the new facility, which will replace the company's existing 32,000 square foot hangar and office complex at PTI. Phase one of construction will be completed in Spring 2008, and will consist of approximately 219,000 square feet of offices, research facilities and an airplane hangar. The HondaJet production facility, measuring approximately 150,000 square feet, is currently in the design phase. HACI plans to begin deliveries of HondaJet to customers in 2010.

Investment for construction of the headquarters and production facility will be about $100 million including equipment. Total Honda Aircraft Company employment, including all engineering, sales and marketing, manufacturing and support activities, will increase to approximately 350 associates once the manufacturing plant reaches full production.

In addition, the company anticipates that about 90 percent of HondaJet's component parts will be supplied by companies in the U.S. and Canada.

HondaJet, Honda's first-ever commercial aircraft, lives up to the company's reputation for dynamic performance together with superior efficiency, delivering class-topping cruise speed and fuel efficiency, greater luggage capacity and a more spacious cabin with seating for up to eight people, compared to other products in the very light jet (VLJ) class.

All major assembly and testing of the prototype HondaJet has been conducted at the company's existing Greensboro facility, which opened in 2001 as an extension of Honda's global R&D operations. The HondaJet production facility will become Honda's seventeenth major manufacturing plant in North America, including two currently under construction in Indiana and Ontario, Canada. Honda already has a $188 million North Carolina manufacturing facility, near Swepsonville, that has been producing general purpose engines, lawn mowers and other power equipment products since 1984. 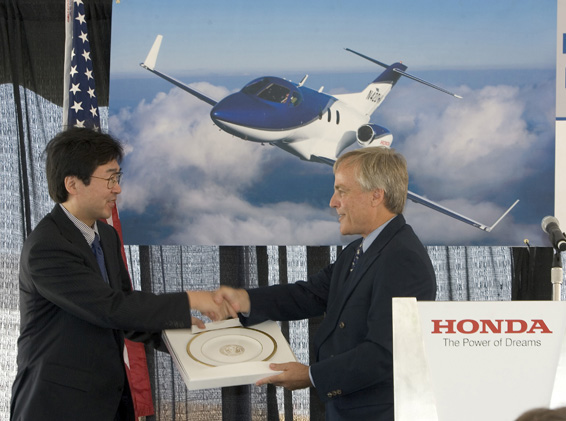