OSHKOSH, WI, U.S.A., July 28, 2005 – With a demonstration flight that included several flybys and a perfect landing in front of a packed crowd of aviation enthusiasts, the experimental HondaJet made its public world debut today at the Experimental Aircraft Association (EAA) AirVenture 2005 in Oshkosh, Wis. AirVenture is the world's largest annual aviation gathering. 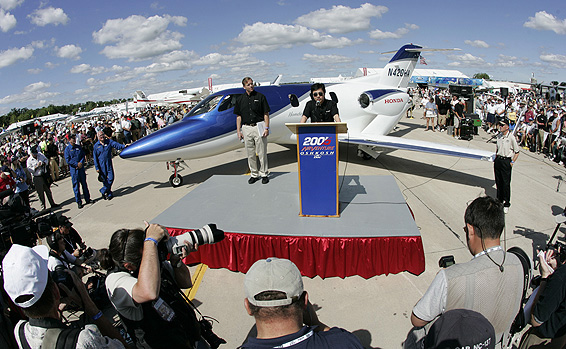 Boasting a number of innovations including a patented over-the-wing engine-mount configuration, a natural-laminar flow (NLF) wing and fuselage nose, and an advanced all-composite fuselage structure, the experimental HondaJet is an advanced, lightweight, compact business jet that features far better fuel efficiency, more available space in the fuselage, and higher cruise speed than conventional aircraft in its class. The HondaJet is powered by two Honda HF-118 engines, each rated at 1,670-pound thrust at takeoff power.

"This public world debut of the HondaJet represents the continued advancement of Honda's long-standing dream of aviation," said Michimasa Fujino, HondaJet project leader and vice president of Honda R&D Americas, Inc. "We are pleased and excited to be able to share this dream and our technology with the aviation community."

Honda first announced the achievement of HondaJet in December 2003, shortly after HondaJet took its first test flight from its base at Piedmont Triad Airport in Greensboro, N.C.

"HondaJet's construction and testing in the U.S. is also evidence of Honda R&D's continued growth and deepening roots in America," added Fujino.

The result of 19 years of research on small aircraft, HondaJet includes a series of innovations. The NLF wing and NLF fuselage nose were developed through extensive analyses and wind-tunnel testing. These designs help HondaJet achieve a low drag coefficient.

HondaJet's patented over-the-wing engine-mount configuration helps eliminate the need for a structure to mount the engines to the rear fuselage and, thus, maximizes the space in the fuselage. Further, by determining the optimal position for the engines, the over-the-wing mount actually reduces drag at high speed to improve fuel efficiency.

The advanced all-composite fuselage structure consists of a combination of honeycomb sandwich structure and co-cured stiffened panels. It was developed to reduce weight and manufacturing costs. This experimental aircraft is also outfitted with a state-of-the-art glass cockpit with an integrated avionics system, as well as an autopilot function.

To date the HondaJet has completed more than 156 hours of flight-testing since December 2003. So far it has achieved an altitude of 43,000 feet and a speed of 393 knots (at ISA+8 degC condition).