Tokyo, September 6, 1999 - Honda Motor Co., Ltd. announced the development of its next-generation 2-liter, in-line 4-cylinder VTEC engines. Designed to set a new benchmark for internal combustion engines for the 21st century, these high-performance, light and compact power-plants generate fuel-economy and exhaust gas emissions at levels at least 50% cleaner than required by the new emissions standards slated for introduction in Japan in October 2000.

Honda plans to build the new engines at the newly planned Sayama engine assembly line of Saitama factory, a facility scheduled to be in operation in the latter half of next year. This new 2-liter series of engines is just the beginning; Honda is also planning the development of next-generation engines of varying displacement capacities in order to renew its entire engine lineup by the year 2005. At the same time, the company is promoting further research into direct injection engines and diesel engine technologies.

Research in various areas of engine development is motivated by the following strict objectives regarding air pollution and global warming: 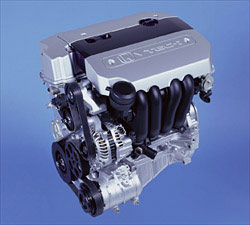