The PGM-FI system uses an electronic control unit (ECU) to regulate the air-fuel mixture being admitted to the engine. By constantly changing the mixture to make it the most suitable for the riding conditions at any particular instant, the system reduces the amount of pollutants generated during the combustion process.

The exhaust air-injection system channels air through the exhaust ports to mix with unburned hydrocarbons (HCs) and carbon monoxide (CO) in the exhaust gas mixture. This helps to oxidize excess HCs and CO within the exhaust pipe, thereby reducing the amounts of these pollutants that are emitted.

The environment-friendly 4-cycle engine exhaust gas purification system will be fitted first to the new VFR large sports bike, which is due to be launched in the near future. 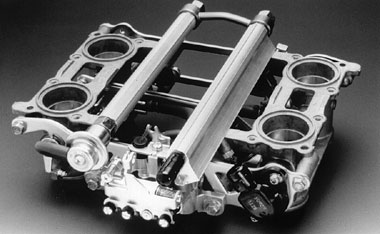 Throttle body for the PGM-FI system