DETROIT, December 19, 2016 –The all-new 2018 Honda Odyssey minivan will make its global debut at the 2017 North American International Auto Show on January 9. The 5th-generation 2018 Honda Odyssey has been completely redesigned and will feature new powertrain technology, sophisticated styling and showcase a new suite of innovative features, making it the ultimate in family-friendly design and packaging. The Honda press conference will take place at 12:00 p.m. EST on January 9, 2017.

An official teaser sketch of the all-new Odyssey was released today, along with four “teaser scribbles” from children of the Ohio-based Odyssey Development Team. These “scribbles” represent bold and youthful design, but the company admits adopting these futuristic illustrations “as is” from these doodling designers could present a variety of real world challenges, so more testing and validation will be required.

“We wanted to have a bit of fun by sharing some of the drawings from children of the Odyssey team members, since they were inspirational in shaping the family-friendly direction of the all-new Odyssey,” said Chad Harrison, chief engineer at Honda R&D America and the development leader of the new Odyssey.

Through five generations, the Honda Odyssey has consistently met the evolving needs of American families. The most popular minivan with individual American car buyers for six years running, the Odyssey is leading again in 20161.  In addition, the Honda Odyssey has been the most popular minivan with under-35-year-old buyers in every year since 20102, and American car buyers have purchased nearly 2.5 million Odyssey minivans since its 1994 debut. 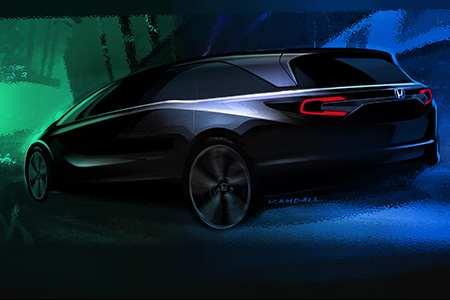 Honda offers a full line of reliable, fuel-efficient and fun-to-drive vehicles with advanced safety technologies sold through over 1,000 independent U.S. Honda dealers. The Honda lineup includes the Fit, Civic and Accord passenger cars, along with the HR-V, CR-V and Pilot sport/utility vehicles, the Ridgeline pickup and the Odyssey minivan. Honda has been producing automobiles in America for 34 years and currently operates 19 major manufacturing facilities in North America. More than 96 percent of all Honda vehicles sold in the U.S. in 2016 have been manufactured in North America, using domestic and globally sourced parts.