Automakers Team Up with Air Ambulance Network to Save Lives

When emergency medical services respond to the scene of a serious accident, a few seconds can mean the difference between life and death. That's why the certified nonprofit organization Emergency Medical Network of Helicopter and Hospital (HEM-Net) is working together with Toyota Motor Corporation, Honda Motor Co., Ltd., and Japan Mayday Service Co., Ltd. to launch a new trial service in Japan. The service, named D-Call Net, is designed to make quick decisions to dispatch air and ground ambulances, and will commence on November 30, 2015.

D-Call Net utilizes data from vehicles when a traffic accident occurs, and by making use of a newly developed probability estimation algorithm for deaths and serious injuries, it estimates the probability of deaths and serious injuries of vehicle occupants. By reporting accidents to base hospitals with air ambulances, it quickly performs the decision to dispatch air and ground ambulances with a swiftness that will improve the ratio of lives saved after traffic accidents. 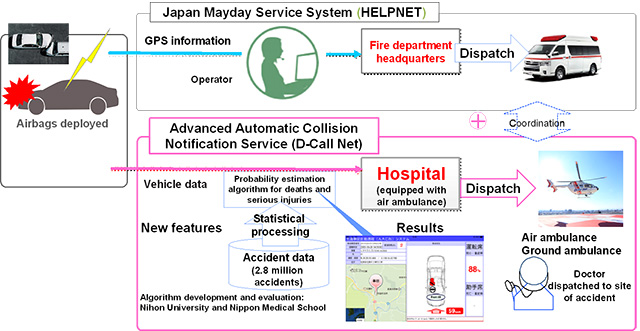 Japan Mayday Service has provided the HELPNET emergency reporting system in Japan since 2000, and when accidents occur in which airbags are deployed, current location and route data is automatically transmitted from the vehicle to the operation center. A HELPNET operator then communicates with vehicle occupants, and according to their requests, they will connect them with rescue authorities such as the police department and/or fire department. This has made it possible to hasten rescue efforts.

This trial of D-Call Net is an expansion of the existing HELPNET service. Together with automatic reports when airbags are deployed, vehicle data including the direction and severity of collisions and whether or not seatbelts were being worn is automatically transmitted to Japan Mayday Service's operation center. Based on probability estimation algorithms for deaths and serious injuries using data from 2.8 million accidents, the probability of death or serious injury of driver and passengers can be estimated. Nine Japanese hospitals will be participating as air ambulance base hospitals for the trial. By transmitting this information to those hospitals equipped with air ambulances, it is possible to quickly decide to dispatch air or ground ambulances that may play a role in the rescue efforts. This achieves a reduction in the time after which doctors can begin medical treatment, with the aim of improving the proportion of lives saved after traffic accidents.

Toyota's Land Cruiser and Crown*1 models were redesigned in August and October respectively, and are now compatible with D-Call Net. For the Lexus brand, the redesigned LX (August), RX (October), GS (November), and GS F (November) are now compatible with the service. Since June 2013, the Honda Accord has been equipped with a Honda-brand navigation system with a D-Call Net function that is capable of connecting to Bluetooth-compatible mobile phones. By 2017 it is expected that the number of vehicles compatible with D-Call Net will increase to approximately 400,000 in Japan.

Prior to trial use, under HEM-Net, an Advanced Automatic Collision Notification (AACN) emergency medical care aid research society was established in 2011, with participation from related government ministries and agencies*2. A variety of issues have been identified and solved since then, with the aim of carrying out and implementing D-Call Net demonstration tests. Looking ahead to full-scale implementation in 2018, HEM-Net is coordinating with national and local governments, and Japan Mayday Service, as well as working to develop nationwide participation in D-Call Net by hospitals equipped with air ambulances. In the hope of saving as many lives as possible, Toyota and Honda are coordinating with other vehicle manufacturers to expand the range of supported vehicles and to promote the spread of D-Call Net.