For the world tour, the HondaJet is scheduled to travel more than 48,000 km in total while stopping in more than 13 countries to conduct flight demonstrations at multiple cities in Japan and Europe.

■Comment by Takanobu Ito, President & CEO, Honda Motor Co., Ltd.
“Entering into the aircraft industry, which adds a third dimension to our mobility products, was a dream of our company founder, Mr. Soichiro Honda. Striving to realize our dreams, Honda took on unprecedented and long-term challenges to develop both the jet engine and aircraft fuselage on our own. Honda is proudly presenting HondaJet, equipped with the HF120 GE Honda new-generation turbofan engine, which will carve out a new set of standards for the performance and comfort of a light business jet. Honda’s corporate slogan is ‘The Power of Dreams.’ We want to realize the joy and freedom of mobility and a sustainable society where people can enjoy life in the sky as well. Moreover, Honda wants to continue to be a mobility company that takes on bold challenges for new technologies in the areas of motorcycles, automobiles, power products, robotics, hydrogen and aircraft.”

– HondaJet tour schedule in Japan* –
In Japan, Honda Aircraft Company will showcase the HondaJet at public events from April 25 to May 4. These events will include static displays of the HondaJet on the ground as well as flight demonstrations at the following airports.
April 25 – Sendai Airport
April 26 – Kobe Airport
April 29 – Kumamoto Airport
May 2 and 3 – Kounan Airport (Okayama prefecture)
May 4 – Narita International Airport 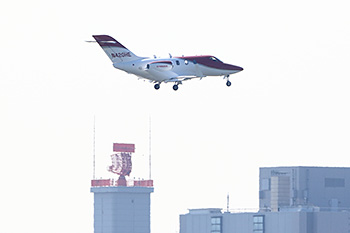