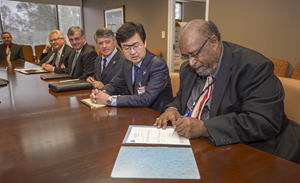 Mr. Taylor is signing PTC and Fujino is watching over it 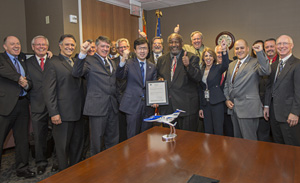 Celebration of the PTC acquisition by HACI and FAA people

“Provisional type certification for the HondaJet is a tremendous milestone for the program, and we are pleased to reach this significant step toward customer deliveries and entry into service,” said Honda Aircraft Company President and CEO Michimasa Fujino. “Honda Aircraft has completed nearly all of the testing and reports required by the FAA, and we are very close to achieving final type certification for the world’s most advanced light jet.”

A provisional type certificate is a design approval by the FAA and is common for business jets when final certification is near. Honda Aircraft has demonstrated that the HondaJet is safe for flight and meets the airworthiness standards defined by the PTC.

“It is a pleasure for the Atlanta ACO to issue Honda Aircraft Company a provisional type certificate for the Model HA-420. It is a milestone event for a first time aircraft manufacturer to receive its first type certificate. This issuance speaks well to the hard work put forward by all the Honda and FAA staff working in a collaborative manner. The Atlanta ACO takes pride in being part of Honda’s introduction of such an advanced and uniquely designed aircraft to the aviation market. We look forward to continuing our collaboration with Honda as we move to final completion of their HA-420 approval.”

Honda Aircraft is targeting final FAA type certification in the next few months, following the completion of final testing and approval by the FAA.

The four HondaJets in the flight test fleet have performed as expected and flown more than 2,500 hours. The flight test program has conducted extensive testing for certification at more than 70 locations in the United States.

The HondaJet is being manufactured at Honda Aircraft Company’s world headquarters in Greensboro, North Carolina, where aircraft production is underway in preparation for customer deliveries. The final assembly line is full with 12 aircraft and another five are currently in the production flow. Honda Aircraft will begin first deliveries after FAA type certification is achieved.

The HondaJet was developed from a clean sheet design and incorporates advanced technologies and innovations. The HondaJet Over-The-Wing Engine Mount (OTWEM) configuration, natural-laminar flow wing and composite fuselage were developed from long-term Honda research activities. These innovations combine to make the HondaJet the fastest, most spacious and most fuel-efficient jet in its class.

The HondaJet is the world’s most advanced light business jet aircraft, with best-in-class advantages in performance, comfort, quality and efficiency. The HondaJet is the fastest, highest-flying, quietest, and most fuel-efficient jet in its class. The HondaJet incorporates many technological innovations in aviation design, including the unique Over-The-Wing Engine Mount (OTWEM) configuration that dramatically improves performance and fuel efficiency by reducing aerodynamic drag. The OTWEM design also reduces cabin sound, minimizes ground-detected noise, and allows for the roomiest cabin in its class, the largest baggage capacity, and a fully serviceable private aft lavatory. The HondaJet is powered by two highly fuel-efficient GE Honda HF120 turbofan jet engines, and is equipped with the most sophisticated glass flight deck available in any light business jet, a Honda-customized Garmin® G3000 next-generation, all-glass avionics system composed of three 14-inch landscape-format displays and dual touch-screen controllers. The HondaJet is Honda's first commercial aircraft and lives up to the company’s reputation for superior performance, efficiency, quality and value.

Honda Aircraft Company is a wholly owned subsidiary of American Honda Motor Co., Inc. Founded in 2006, Honda Aircraft has its heritage in more than 20 years of groundbreaking aeronautical research and development. At Honda Aircraft’s world headquarters in North Carolina, the birthplace of aviation, the company’s associates work in more than 600,000 square feet of state-of-the-art R&D, production, administration and customer service facilities to develop, produce, market and support the HondaJet with HondaJet dealers. The challenging spirit upon which Mr. Soichiro Honda founded Honda Motor Co., Ltd. is alive today as Honda Aircraft fulfills one of Honda’s longstanding dreams to advance human mobility skyward.