Striving to minimize the environmental footprint of its business activities, Honda became the first automaker in Brazil*1 to start a wind power generation business. Honda Energy built its wind farm, an investment of approximately 100 million Brazilian reais (approximately 4.6 billion yen*2), in the city of Xangri-lá in Rio Grande do Sul, the southernmost state in Brazil (approximately 1,000 km south of Honda's current auto production plant in Sumaré, São Paulo). Honda Energy will be proactive in promoting the use of renewable energy in Brazil.

Honda Energy's wind farm will be equipped with nine wind power turbine units, and is expected to generate approximately 95,000 MWh of electricity per year, equivalent to Honda's current annual electricity needed for automobile production in Brazil (approximately 140,000 units). By generating renewable energy to cover the electricity needed for the plant, Honda is expecting to reduce CO2 emissions by more than 2,200 t annually.

Comment by Carlos Eigi, president of Honda Energy do Brasil Ltda.:
“Since Honda began its business activities in Brazil in 1976, Honda has been cooperating with the local community and striving to minimize the environmental footprint of our production activities. I am very much pleased that Honda made another significant step toward the utilization of renewable energy by starting the operation of our wind farm today. Under our global environmental slogan – ‘Blue Skies for Our Children' – Honda will continue to be proactive in pursuing environmental conservation activities in Brazil." 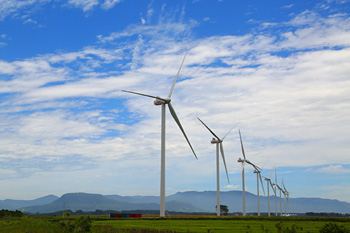 About Honda Energy do Brasil Ltda.