Conducted in real-world urban transportation environments, the program will focus on motorcycles, automobiles and power products based on electromotive technologies. The comprehensive program will also use advanced communications & telematics and solar-powered charging technologies to explore future forms of personal mobility and their potential of CO2 emissions reduction.

<Major objectives of the Electric Vehicle Testing Program>
On August 5, 2010, Honda and Kumamoto Prefecture entered into a comprehensive agreement to perform testing of next-generation mobility within the prefecture (agreement period: August 2010-March 2013). Based on this agreement, Honda has already begun testing the Monpal ML200 electric cart with the cooperation of Kumamoto City starting in October 2010. Additional testing programs will take place in Kumamoto City, Minamata City, Aso and Amakusa areas to further help realize a low-carbon mobility society in the future. The program will study the following:

Earlier on December 15, 2010, Honda announced its Electric Vehicle Testing Programs in the United States (Torrance, California) and with Saitama Prefecture on December 20. In addition to Japan and the United States, Honda is also considering the possibility of conducting a similar program in China. 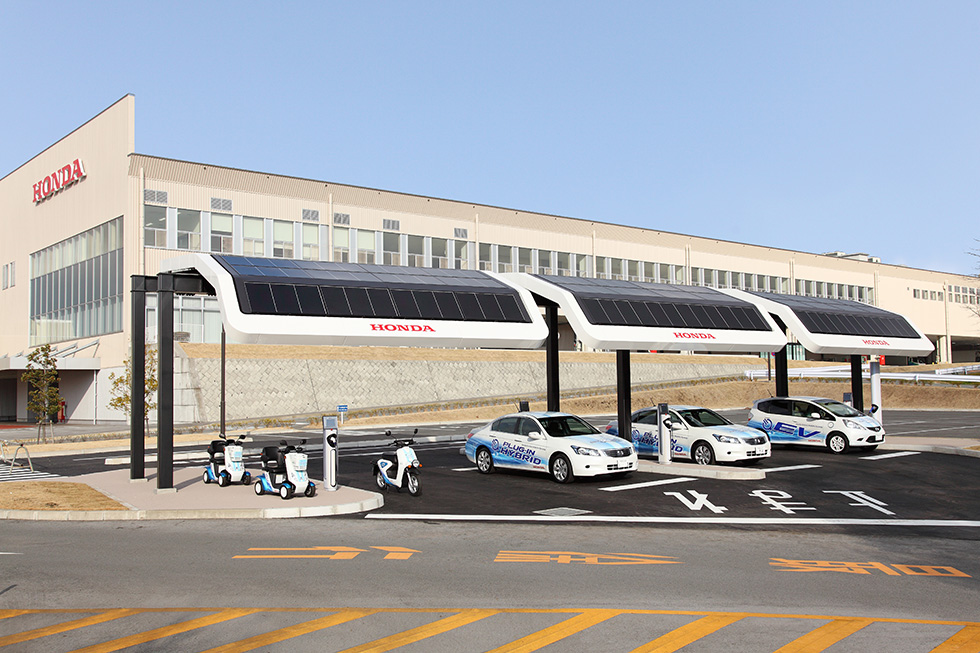 [Electric Vehicle Testing Program in Kumamoto Prefecture]
Kumamoto Prefecture, its cooperating municipalities, the Kumamoto Industrial Federation, Kumamoto University, Kyushu Electric Power Co., Inc. and Honda have formed a Next-Generation Mobility Testing Program Implementation Committee, which will explore the potential QOL benefits of next-generation personal mobility. To help contribute to the expansion of EVs and plug-in hybrid use, the committee will also explore future programs and locations within Kumamoto Prefecture. The following are the program objectives for each city:

Based on the popular Fit that is known for its compact, maneuverable body and superior utility, this vehicle features a coaxial motor and other electromotive technologies developed for the FCX Clarity fuel cell electric vehicle, combined with a Toshiba-produced lithium-ion battery. Charging with a 200-volt power source takes less than six hours, and vehicle driving range exceeds 160 km.

Based on the platform of the Inspire mid-size sedan, this vehicle features a fuel-efficient 2.0-litre i-VTEC engine and two high-output electric motors, specially developed for this system. The vehicle can be operated in three drive modes: all-electric, gasoline-electric hybrid and engine drive modes. The lithium-ion battery is manufactured by Blue Energy, and the vehicle's all-electric mode driving range is 15 to 25 km.

Honda made the EV-neo electric scooter available for lease today in Japan to companies that make short-range deliveries and also to individual business owners.

Firstly launched in 2006, this stylish, comfortable and easy-to-ride 4-wheel electric cart with great stability will also be used as a testing vehicle. The Monpal used in this testing program will add a recording device capable of storing a variety of vehicle operation and performance data.

[Solar-powered charging station]
Located inside Honda’s Kumamoto Factory in Kumamoto Prefecture, this charging station features a solar-powered generating system manufactured by Honda Soltec. Honda will use the station in combination with advanced communications & telematics to test a wide variety of program objectives. 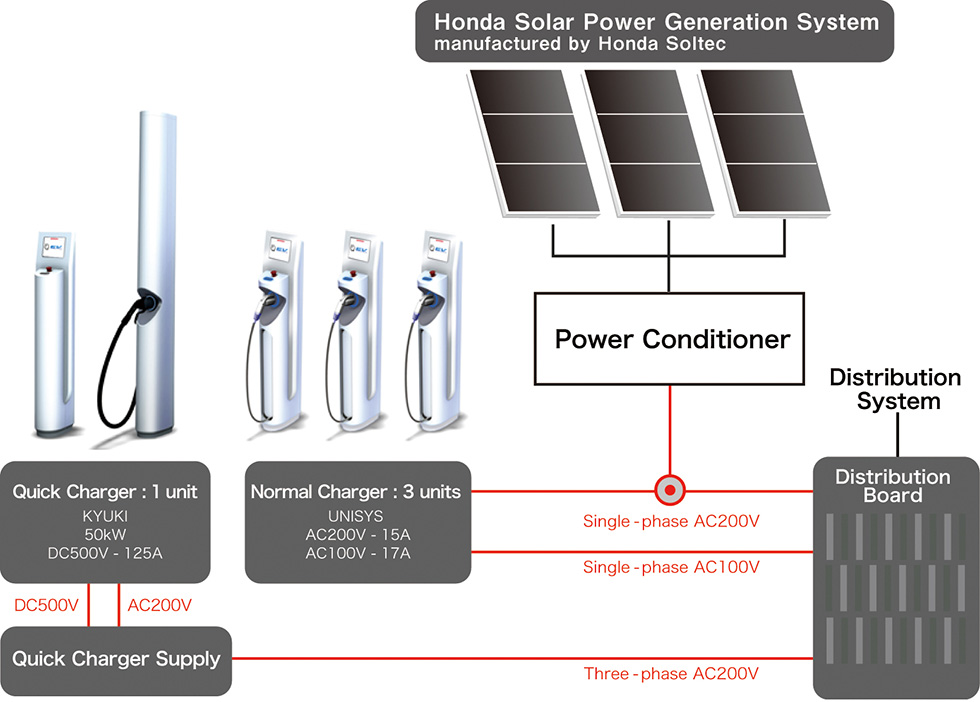 <Charging support service>
Even when away from the test vehicle, a customer can view a map on their smartphone of how far the vehicle can drive on its remaining battery charge, and also search for charging stations within that area. The customer can then select a charging station from the search results, forward the station information to the vehicle via the InterNavi Information Center, and set the station destination on the navigation screen. The navigation system will then guide the customer to the charging destinations. 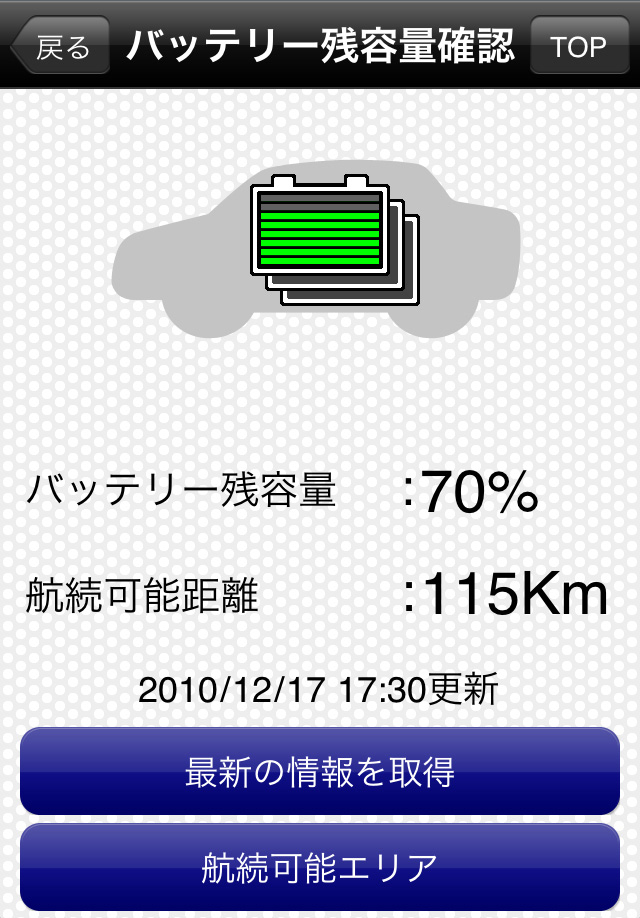 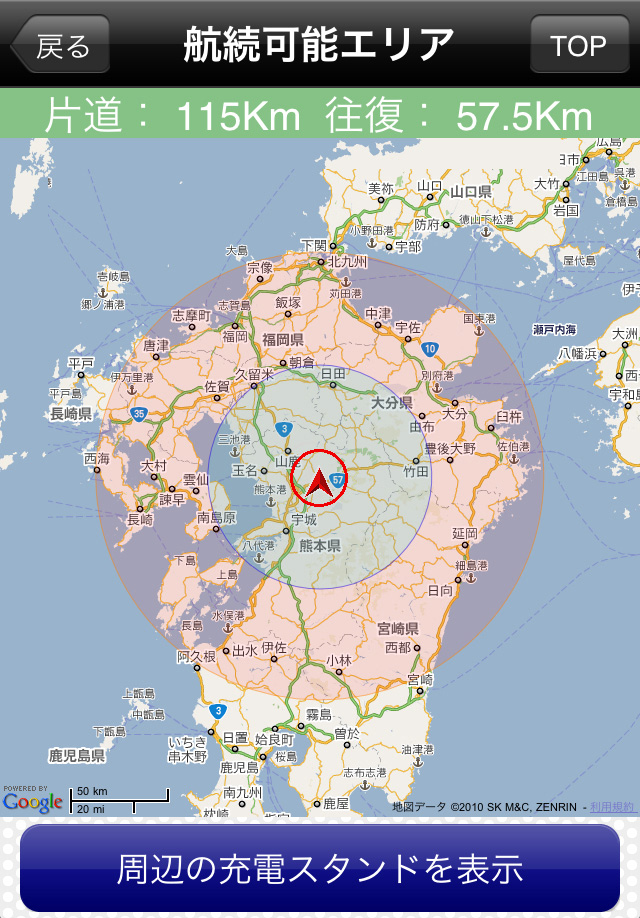 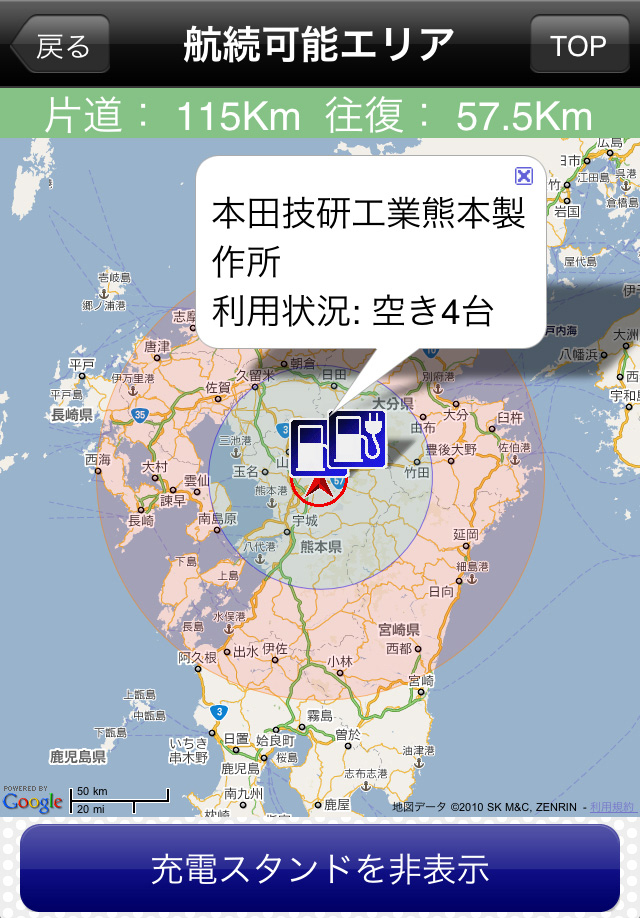