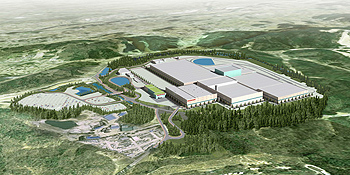 The groundbreaking ceremony was attended by approximately 100 dignitaries and guests, including Kiyoshi Ueda, the governor of Saitama prefecture; Akira Matsunaga, the director of Automobile Division, Ministry of Economy, Trade, and Industry (METI); Shinichi Yahagi, the director of Policy and Coordination Division, Ministry of the Environment; and Mikio Tsukui, the mayor of Yorii; as well as Takeo Fukui, the president and CEO of Honda.

The new auto plant is scheduled to begin production in 2010, with an annual production capacity of approximately 200,000 units. Along with the new engine plant in Ogawa, which is scheduled to become operational in 2009, the new auto plant in Yorii will be built with the concept of "a peoplefriendly and resource/energy-recycling Green Factory that will employ high quality and highly efficient production and logistics systems" and with the existing Sayama plant, Honda will further strengthen its technological capabilities. These plants will be responsible for evolving such technologies horizontally to other Honda operations worldwide.

In the area of the environment, Honda will accelerate its efforts to establish a "Green Factory," which can coexist in the local community, through various activities including planting Yorii-native plants in green space and the rooftop afforestation of the plant.