October 3, 2003-Honda Motor Co., Ltd. announced today that it has developed the world's first electronically controlled fuel injection system (Honda Programmed Fuel Injection, or 'PGM-FI') for use in 4-stroke, 50cc engines. The PGM-FI system, which offers superb starting along with improved fuel economy and cleaner emissions, will be available on a new-model scooter in Japan next spring.

All Honda scooters for sale in Japan are scheduled for conversion to PGM-FI by 2007, and the majority of models for sale worldwide will be equipped with PGM-FI by 2010.

Use of PGM-FI in any motorcycle requires precise control technology, but in smaller models with a displacement as low as 50cc, the further needs for compact design and low cost present a considerable technical challenge.

Main achievements in developing PGM-FI for use in a 4-stroke, 50cc scooter:

As part of its ongoing effort to help preserve the global environment, Honda completed the conversion to 4-stroke engines of all its motorcycles offered for sale worldwide (excluding some specialized models) at the end of 2002. The CX500 Turbo (a 500cc export model) was the first Honda motorcycle to be sold with fuel injection, in 1982. Since then, fuel injection has been available on a wide range of motorcycles, from large-displacement 1800cc bikes down to small-displacement 125cc models. Now, Honda's latest technological advances have further broadened this range to include these new 4-stroke, 50cc engines-a world's first.

This new technology will promote greater fuel economy and cleaner emissions in 50cc-class scooters, the largest sales category in Japan. 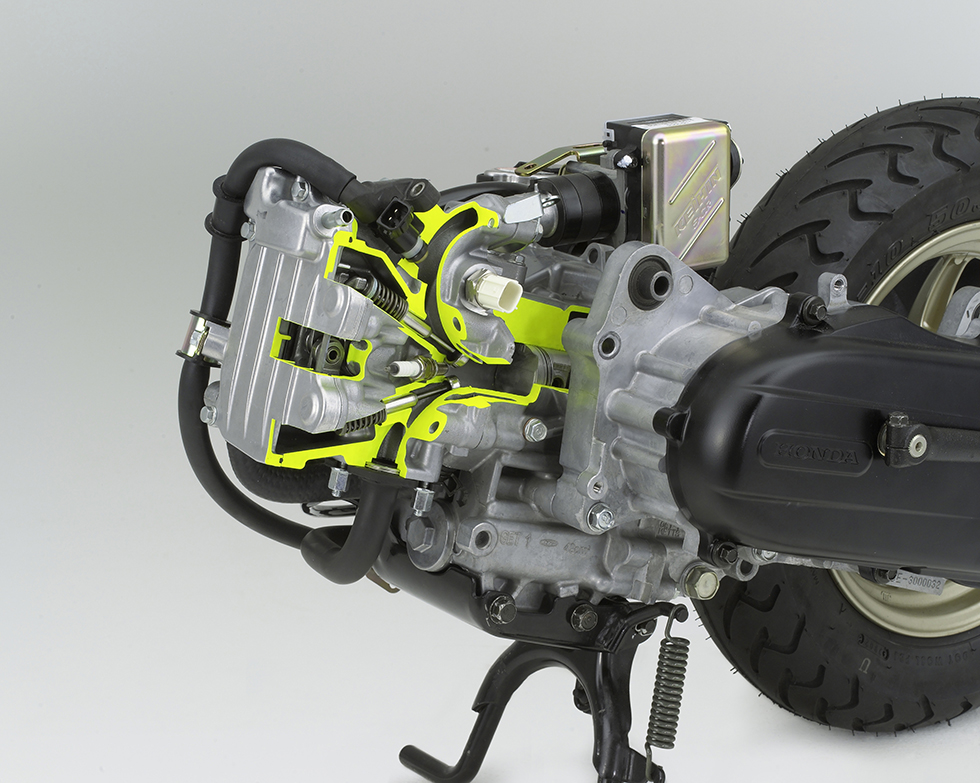 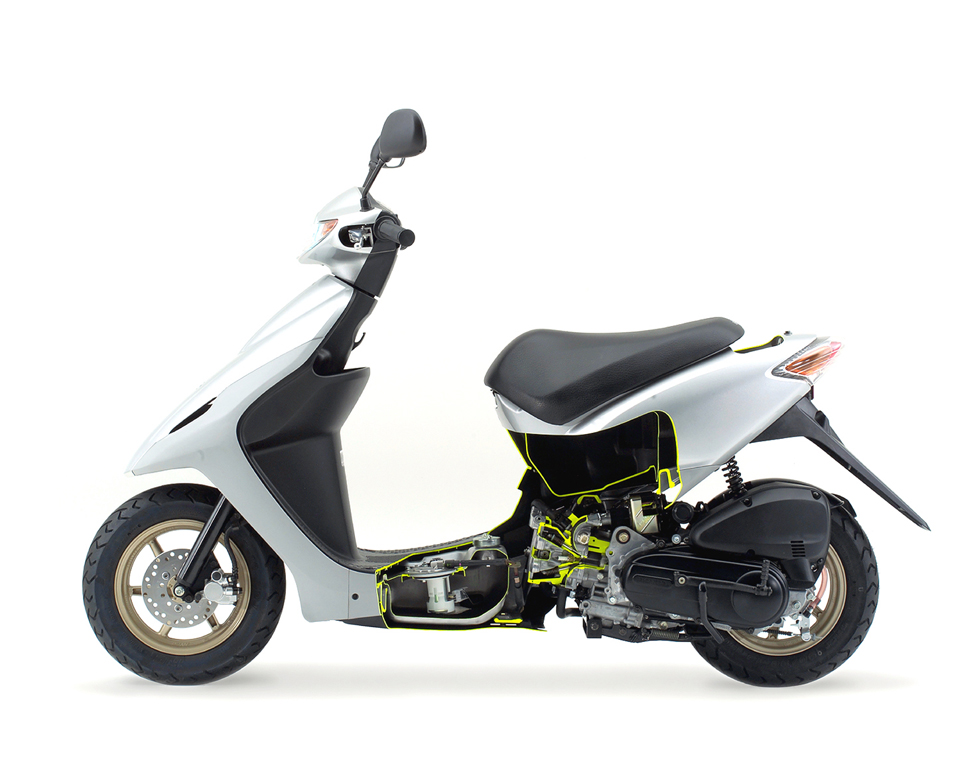 Main Features of the PGM-FI System for Use in a 4-stroke, 50cc Scooter

Functional components are combined and sensing functions integrated, and the fuel pump and other major components redesigned to reduce the number of parts required to just 8, compared to the 15 used in a conventional PGM-FI unit for larger models. On top of this, a 32-bit CPU was used to integrate the ACG*1 starter control ECU*2 with the PGM-FI control ECU, resulting in greater functional integration for further cost savings.

In order to maintain the 50cc scooter's flat-floor design, an ultra-compact fuel pump module was newly designed to fit inside the flat fuel tank located underneath the floor. The unit is just 64% of the volume and 32% the weight of the one used in the 125cc Pantheon scooter released in Europe in February 2003. The throttle body and ECU have also been made lighter and smaller, with volumes of just 38% and 21% respectively, of those used in the carburetor-equipped conventional 50cc scooter.

An injector for use in a small-displacement engine must provide both minute injection volumes and fine atomization of the injected fuel. The new injector for use in 50cc engines uses a two-hole injection nozzle to attain just one-third the injection volume compared to a 125cc scooter (the Pantheon). And, whereas conventional injectors generally employ multi-holed injection nozzles to obtain fine atomization, the new injector uses an optimized internal flow-path shape to achieve the world's highest level of atomization.

Airflow volume also needed to be reduced to one-third that of a 125cc scooter (the Pantheon). The newly developed air valve for use in 50cc engines employs an ultra-miniature step motor to precisely move a high-precision valve in increments of 30µm, ensuring optimum air volume control during startup, warm up, idling, and other engine operating conditions. This results in significant improvements in startup and idling performance, and reduces the need for periodic maintenance.

Kick-starting when the battery is completely dead

Users of small scooters want to start them using the kick-starter even when the battery is completely dead due to long periods of disuse. With previous fuel injection systems, it was difficult to start the engine with the current produced by the kick-starter alone. With the new system, however, small amounts of current produced by the kick-starter are directed over a 0.2 second period only to the circuits required for startup. Thanks to this and to a newly developed energy-saving fuel pump, the engine can start up smoothly even when the battery is dead.