Esteban Guerrieri kicked off the WTCR – FIA World Touring Car Cup with a dominant victory from pole position for the Honda Civic Type R TCR in Marrakech, while Nestor Girolami made it a double-podium for ALL-INKL.COM Münnich Motorsport. 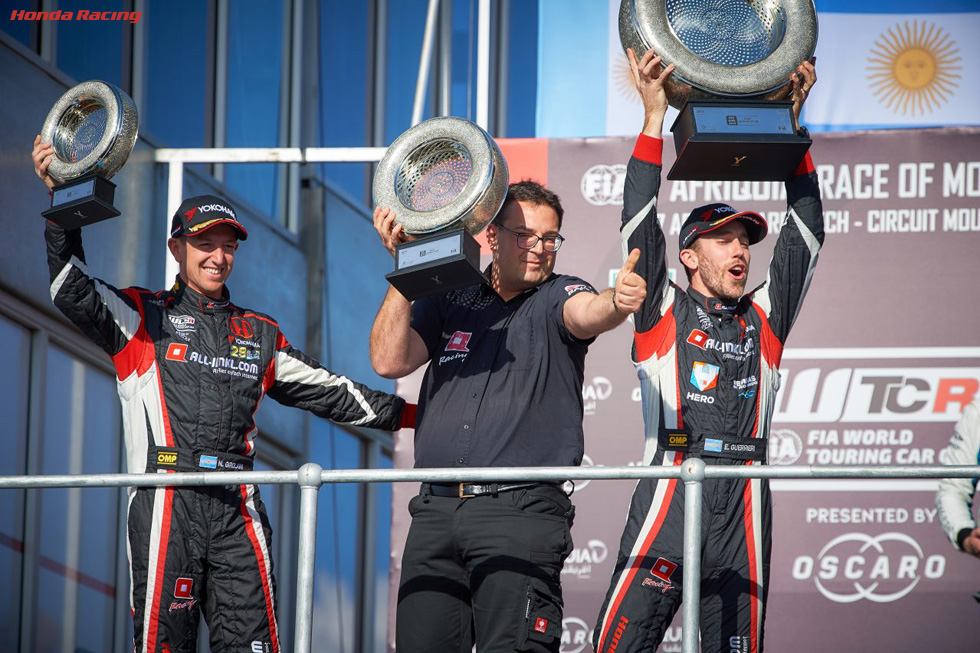 Argentinian driver Esteban, who finished the 2018 season with victory in Macau, proved he’s a master of the streets by streaking to Honda’s first WTCR pole position in an ultra-tight session where the top 21 cars were covered by one second.

He then clung on to the lead at the start and drove a commanding race to record his third career victory in the series; a result that gave him an early seven-point lead in the Drivers’ Championship.

Team-mate and countryman ‘Bebu’ started third, but lost ground on the opening lap while battling to defend his position. The WTCR debutant regrouped and made up positions to claim a superb third-place finish and make it a double-podium for his German team.

KCMG, who make their full-time WTCR debut this weekend, showed strong pace with returning driver Tiago Monteiro and series rookie Attila Tassi both proving their pace throughout the day.

Tiago, who has not raced full-time since sustaining injuries 19 months ago, was on the pace from the word go; missing out on a front-row start by just 0.2 seconds after encountering heavy traffic in qualifying.

He fought hard in the race to improve to sixth place and cap a fine comeback performance.

Team-mate Attila started from the back row after damaging his splitter on a large kerb and pitting for repairs late in qualifying. The Hungarian teenager made excellent progress; climbing to 19th by the checkered flag and setting the race’s fastest lap.

Sunday plays host to a separate qualifying session, which determines the grid position for Races Two and Three.

“It feels absolutely amazing to start the season with a pole position and a win; it has been perfect. To have Bebu; not only my team-mate, but my good friend, on the podium with me is even better. We’re living the dream we both had many years ago in Argentina! The Civic Type R is definitely the car to have this weekend, but the team at ALL-INKL.COM Münnich Motorsport, did an incredible job to prepare it, because we really didn’t know what to expect here. My start wasn’t great, but I was able to hang on to the lead, and I really needed to push hard to keep the cars behind, but we got it done. Championship lead; perfect.”

“What can I say? This is just an incredible feeling. Thank you to the team and to Honda for trusting in me to drive this Civic Type R; I hope this is as good for you as it is for me! I really feel that while this is a great start, it’s only the first step. When you look at the times from qualifying, you can see that if I’d been one and a half tenths slower, I’d be on the fourth row. This really is one of the toughest championships to race in and the gaps prove it. We had to work so hard as a team to achieve this and I’m just really proud for myself, for Esteban and for Argentina.”

“It’s been a tough day, but I made some decent progress in the race. The target was just to go out and gain experience, and I did this in the damp in FP1; just doing lap after lap, and we developed quite a good feeling with the Civic Type R TCR. The splitter damage was very significant and starting from the back is always a risk, but the pace was quite good and I could set the fastest lap. I was losing performance with the brakes towards the end and had a small brush with the wall, but I’m home in one piece and ready to push on tomorrow.”

“It feels really good to be back. The team has worked really well together and sixth is a strong result to start the season with. There was a lot of doubt around me this weekend; lots of people asked ‘is he ready? Will he be back to his best?’, but honestly, it feels like I’ve never been away. It just feels like a normal race weekend, which is exactly what I’ve been hoping for. I never got a clear lap in qualifying, and I was pushing hard in the race, but dropped back from the leaders. This is a solid result and I think it’s possible to go forwards tomorrow.”

“It’s been quite good today. Tiago had some issues with traffic in qualifying, so eighth was probably lower than he could have managed, but he made progress in the race and finished sixth. Attila had an issue when he went over a kerb heavily and broke the splitter, but on a track he’s never seen before, where passing is very tough, he was able to make up seven places and set the fastest lap, so it’s clear that if we get some gaps in qualifying tomorrow, both cars can be truly competitive.”

“It’s a wonderful day. The boys did an amazing job to prepare the car and both Esteban and Bebu were excellent behind the wheel on a day when the times were so close and one mistake could be the difference between the front row and eighth. We did some great work during the winter; initially with our Team Principal Rene Münnich winning the TCR Middle-East title and then with Bebu and Esteban in testing from early March. This double-podium is a direct result of that, and the team deserves all the credit. The target for tomorrow is more of the same.”

“What a fantastic way to start the season. We must give our most enormous congratulations to ALL-INKL.COM Münnich Motorsport for their performance today. Esteban and Bebu drove magnificently and the team made the very best of the Civic Type R TCR. We also saw very strong pace from KCMG with Tiago and Attila, but we know all four drivers have had to push to their limit today because when you look at how close the times were in qualifying, it’s clear that all the brands competing here are incredibly closely-matched. It will be very tough to repeat this tomorrow.”