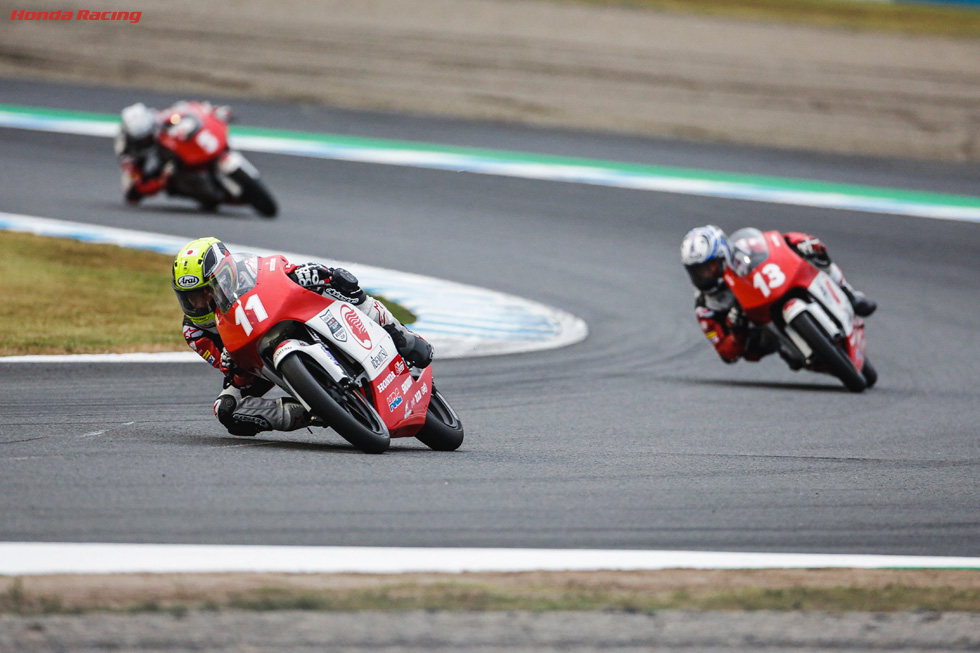 Takuma Matsuyama suffered a fractured wrist on Friday at Motegi, but that didn't stop the Japanese rider converting pole position into an incredible win on Saturday afternoon. He extends his points lead to 25, now ahead of Afridza Munandar as the Indonesian took second and Sho Nishimura suffered a costly crash out of contention. Syarifuddin Azman completed the podium to keep his run of form rolling in another impressive race.

It was Matsuyama who kept P1 from pole, the number 11 blasting away from the line and already able to pull out a couple of bike lengths from the off. Azman was in hot pursuit, however, as he managed to put himself in charge of the chase, with the fight for third remaining a freight train early on.

Little by little, however, the chasing pack would reign the two in, as Azman managed to reign in Matsuyama too. Then it became a classic group battle at the front, with the top ten covered by just over a second and a half and the gaps a constant concertina.

As the final laps appeared in sight though, it was down to a key group of six in the fight for the podium - Matsuyama, Munandar, Azman, Thai rider Tatchakorn Buasri, Shoki Igarashi and Nishimura. Drama hit on the penultimate lap for Nishimura, however, as the number 3 suddenly tagged the rear tire of Munandar ahead of him and went down. That left Matsuyama with an open goal, and despite his fractured wrist, the number 11 would emerge victorious nonetheless.

Keeping calm and collected at the front, the points leader defended to perfection around the final two corners to keep the lead and blast towards the line ahead - nailing the exit too and no one able to get close as he crossed the line nearly two tenths clear. That gives him a 25-point lead ahead of Munandar as the Indonesian came second, narrowly escaping Azman on the drag to the line.

Buasri just missed out as he crossed the line in fourth, with Igarashi completing the top five as the last of the lead group, taking some good points after his dramatic antics in Buriram.

Warit Thongnoppakun was sixth and the first of those on the chase although the Thai rider cut the gap to a few tenths, heading Herjun Firdaus over the line. Wildcard Kanta Hamada impressed in P8, ahead of a solid race for Australian Harrison Voight. Wildcard Shota Kiuchi completed the top ten.

Abdul Mutaqim and Piyawat Patoomyos took P11 and P12, ahead of Nishimura as the title challenger was able to remount and score a smattering of points. Hildhan Kusuma and Shinji Ogo locked out both the scorers and the finishers.

Jacob Roulstone pulled into the pits to retire, Luke Power crashed out and Adenanta Putra stacked it early on - likely taking himself out of the Championship hunt in the process. He also took out an unlucky Rei Wakamatsu, who suffered a broken collarbone.

Nishimura Back in the hunt After Magnificent Race 2 Victory 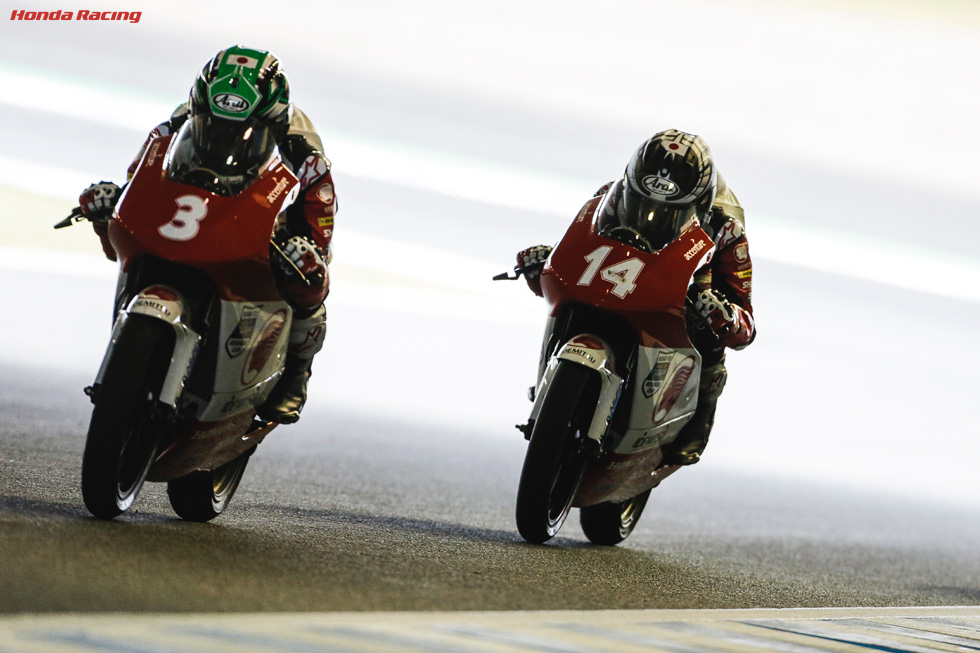 Sho Nishimura is back in business! The Japanese rider has had a tougher time of it since the summer break but he came out swinging in Race 2 at the Twin Ring Motegi to take an authoritative win. With key rival Takuma Matsuyama only taking fifth after a last lap wobble, that closes the standings right up as Matsuyama's lead is now back down to just 12 points. Completing the podium were Thai rider Tatchakorn Buasri and home hero Shoki Igarashi, with both able to just pull ahead of a close drag to the line to take rostrum finishes.

Off the line it was Matsuyama who took the holeshot from pole, although the number 11 had more company in Race 2 as Nishimura made a blinding getaway and was able to almost get alongside his compatriot into Turn 1. Matsuyama held firm, however, and another classic IATC group battle began in earnest.

Matsuyama led first, Syarifuddin Azman in pursuit, and Buasri was a firm presence at the front mid-race. It was only in the latter laps that Nishimura really started to put the hammer down, the eventual winner crossing the line in the top three in each of the last five laps...

In those last five laps, it was down to a five rider battle, with Harrison Voight just losing touch with the fight for the front. And it remained five, but the last lap would be a dramatic decider for one man at least.

Matsuyama was right in the fight to take the win, but a sudden moment for the number 11 saw him plummet back from the group, and it looked like it was all over as Buasri vs Nishimura vs Igarashi vs Azman raged on. But the points leader wasn't for giving up and he dug deep despite his injury, able to tag back on to the quartet by the time the final few corners were in sight. Would he be able to move forward?

By then, Nishimura had struck for the lead with a truly stunning move around the outside of Buasri; the Japanese rider inch perfect to take over in P1. And from there, he defended to perfection too - closing the door around the final two corners and able to stay ahead on the blast to the line. In the scuffle just behind, it was Matsuyama who just got shuffled back out of contention, crossing the line in fifth as the three men ahead of him went toe-to-toe towards the line.

Buasri was the man who won the slipstream contest, taking second just ahead of Igarashi. Azman, after three consecutive podiums, just missed out in fourth.

Behind Matsuyama's Iron Man ride to fifth despite his wrist, it was an impressive performance from wildcard Shota Kiuchi to take P6, with Harrison Voight taking a tumble on the final lap and out of the race. Then came the second group, headed by title challenger Afridza Munandar in P7 as a gaggle of riders all crossed the line within a second. They were Munandar, Adenanta Putra, Warit Thongnoppakun, Jacob Roulstone, wildcard Kanta Hamada, Herjun Firdaus and Piyawat Patoomyos - all the way down to P13. Hildhan Kusuma and Shinji Ogo completed the points.

That's it from a race weekend of two halves at Motegi - or certainly of two riders. After another stunning showdown, there's now only a single round remaining as Sepang International Circuit hosts the final two races in a couple of weeks - and it's only 12 points in it. Everything will once again get decided in Malaysia, so don't miss it and keep up to date with the Selection Event for next season that takes place just before the finale, too!