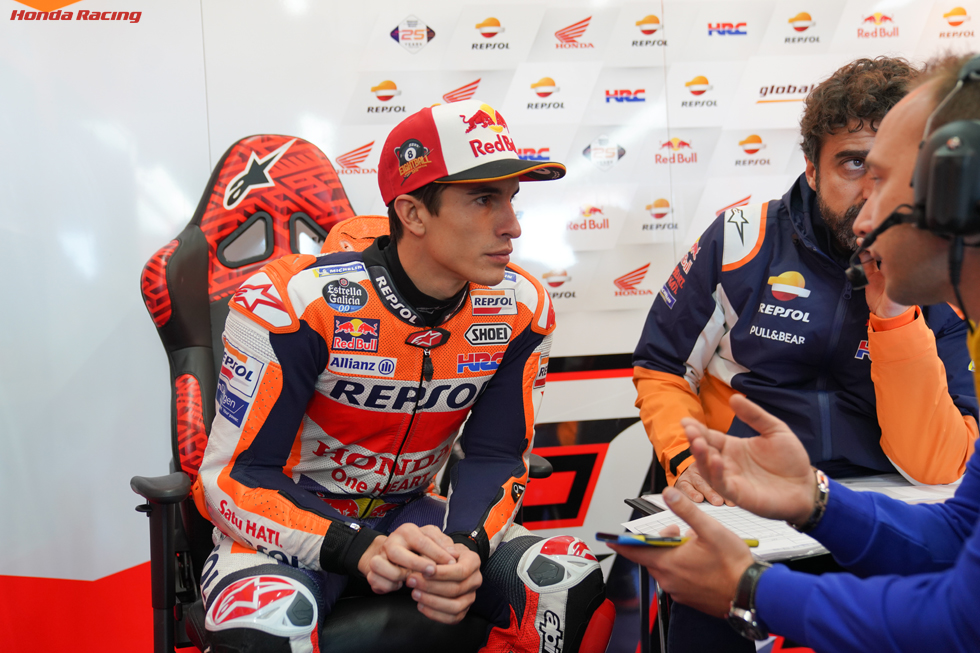 Conditions have not been easy at Valencia this weekend. Cold autumnal weather is making it difficult for riders to get enough heat into their tires, especially through the anti-clockwise track's few right-handers. This causes issues with both grip and tire feel, which riders need to push to the limit.

Marquez was one of many victims at Valencia's Turn Four right-hander, sliding off without injury during today's FP4 outing. He recovered brilliantly to end the later Q2 qualifying session just 0.032 seconds behind pole-sitter Fabio Quartararo.

The last race of a thrilling 2019 MotoGP season is expected to have Marquez contesting first place with Quartararo, third-fastest Jack Miller and fourth-quickest Maverick Vinales, who won the last race in Malaysia two weekends ago.

Cal Crutchlow (LCR Honda CASTROL RC213V) qualified on the third row of the grid, just seven tenths slower than pole position. The 34-year-old Briton, who finished a superb second to Marquez in Australia three weeks ago, knows he will need a good start if he is to get away with the lead group at this tight, twisting track, where overtaking is very difficult.

Like the rest of the grid Crutchlow has worked hard with his crew on settings and tire choice in an effort to improve tire feel and grip for the last race of the season. He took a heavy tumble in FP3 at the Turn Ten right-hander, which is causing him some pain.

Johann Zarco (LCR Honda IDEMITSU RC213V) will commence his third Grand Prix with Honda, substituting for the injured Takaaki Nakagami (LCR Honda IDEMITSU RC213V), from the fifth row of the grid. This was another good performance from the 29-year-old Frenchman who has had to deal with dramatically contrasting weather conditions over the past three races: treacherously strong winds in Australia, tropical heat in Malaysia and autumnal chill here at Valencia.

Lorenzo, who on Thursday announced his retirement from MotoGP, qualified 16th fastest today, his best grid position since he returned from injury at the British GP. The 32-year-old three-times MotoGP World Champion has therefore put himself in an excellent position to score points tomorrow and help his team win the teams prize.

Nakagami has flown in for the weekend from Japan, where he recently underwent surgery on a troublesome right shoulder injury. The 27-year-old revealed that he plans to next ride a motorcycle in late January – a gentle outing on a dirt bike – before returning to racetrack action in February's first pre-season tests at Sepang. During the next two months he will undergo extensive physio in Japan, where the popularity of baseball ensures there are many experts in treating shoulder injuries.

Moto2 pole position went to Jorge Navarro (MB Conveyors Speed Up Speed Up), who is still chasing his first victory in the intermediate class. He will be joined on the front row tomorrow by on-form rookie Jorge Martin (Red Bull KTM Ajo KTM) and Stefano Manzi (MV Agusta Temporary Forward MV Agusta), who was delighted with his first front-row performance.

Somkiat Chantra (IDEMITSU Honda Team Asia, Kalex) wasn't able to give his best in the conditions, the 20-year-old Thai rider ending the day 24th fastest, one place ahead of Dimas Ekky Pratama (IDEMITSU Honda Team Asia Kalex). The 27-year-old Indonesian was half a second faster than his team-mate. Chantra, who scored a best-ever ninth-place finish at home in Thailand last month, knows he will need a great start if he's to complete his apprenticeship season in the points for the seventh time.

Marcos Ramirez (Leopard Racing Honda NSF250RW) came within 0.274 seconds of taking Honda's 15th Moto3 pole position this afternoon. The 21-year-old Spaniard, who started the last two races from pole, will nevertheless start the last Moto3 race of the year from the front row of the grid, aiming for his first victory since August's British Grand Prix.

Recently crowned 2019 Moto3 World Champion Lorenzo Dalla Porta (Leopard Racing Honda NSF250RW) ended free practice a close second fastest to team-mate Ramirez, but will start from the top of the third row of the grid after riding the seventh-fastest lap in qualifying.

The 22-year-old Italian has won the last three races and will want to end his time in Moto3 – before he graduates to Moto2 next season – with a fourth consecutive win, but he will have to fight hard from the third row.

Fellow Italian Tony Arbolino (VNE Snipers Team Honda NSF250RW) was one of the fastest riders in the Q2 session until he fell. He will start from 12th at the back end of row four, one row ahead of John McPhee (Petronas Sprinta Racing Honda NSF250RW), Niccolo Antonelli (Sic58 Squadra Corse Honda NSF250RW) and Alonso Lopez (Estrella Galicia 0,0 Honda NSF250RW).

Team-mates Kaito Toba (Honda Team Asia Honda NSF250RW) and Ai Ogura (Honda Team Asia Honda NSF250RW) had a challenging final qualifying of 2019. Ogura, 19-years-old from Fukuoka, was 21st, while Ogura, 18-years-old from Tokyo, was 25th. Both riders struggled to get enough feeling from the tires in the cold, windy conditions to ride as hard as they know they can. Their day ended badly when both were sanctioned for riding slowly in two or more sectors of the track, so they will both start from the back row of the grid.

Following tomorrow's final races of the year the MotoGP commences post-season tests here on Tuesday, while the Moto2 and Moto3 teams moves to Jerez. 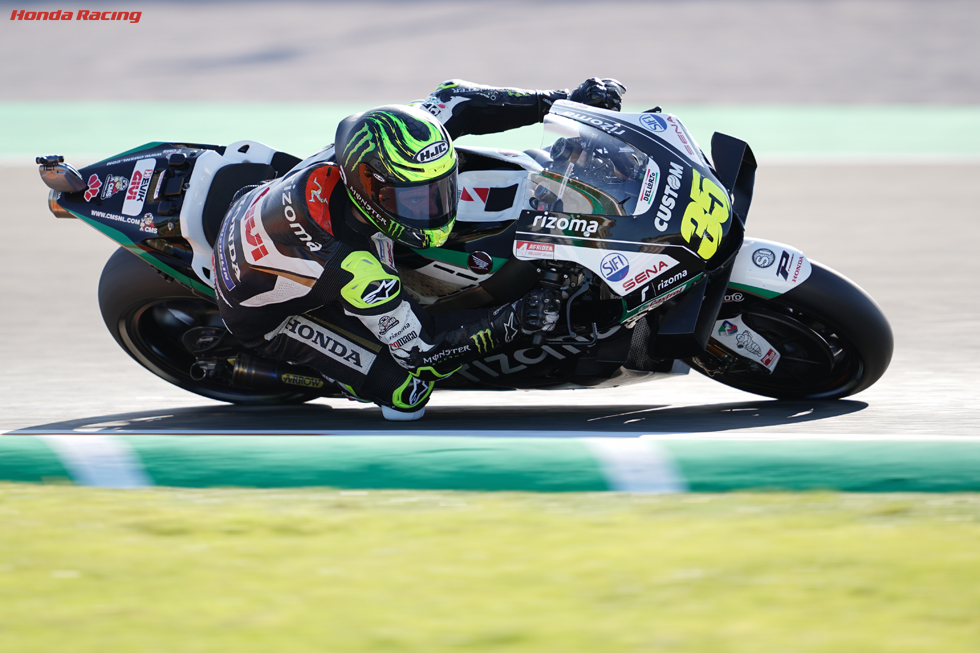 "I'm very happy because I was able to get closer than I was expecting. I didn't think I could be this close over one lap. With our race pace we're not very far away, but Quartararo is very strong over one lap. Anyway, I'm happy to be on the front row and our first target is done. We'll try to start well tomorrow and then see what happens. It will be a tough race as Viñales and Quartararo are very fast but I think we can manage it well."

"I've got a big contusion on my right hand – I crashed in a right, and my left hand slapped the ground hard, so it's painful. I got some ice on it for an hour between FP3 and FP4 and it wasn't too bad after that, but this isn't a good place to have a sore left hand because pretty much the whole circuit is lefts. I'm happy enough, because we've already started testing for next year, with some new parts on the bike. There are some positives and some negatives to what we are trying, but we have decided to go with it. I am happy enough getting data for Honda. We are working because the bike isn't not turning that great, so you have to ride the bike in a different way here."

"I'm little bit disappointed about today. In the morning I lost some time because I was not so confident in the cold. Only in the last five minutes was I faster, but that was too late and I paid for that in the afternoon. I improved and got a better feeling but it was not enough to make it into Q2. It's a shame – my feeling with the bike is improving, but sometimes I need a little more time to find the confidence necessary to push to the limit."

"Today was more or less what we expected. Maybe I could have been a little higher on the grid but those ahead were in the 1m 30s. The plan for tomorrow is to make a good start and avoid trouble in the opening laps and then see what my pace will give me at the end of the race. I think we can move forward and maintain a pace that is closer to the leaders than in the previous rounds. It will certainly be an emotional race tomorrow, so I hope that I can enjoy it all and importantly help Honda as best I can."

"We made some changes to the bike for qualifying. During Q2 it took me a while to understand how the changes worked, but lap by lap I felt better and better. I was watching my lap-timer and even when I made little mistakes my lap times were still good, so I focused really hard to make a perfect lap and I did it nearly at the end. I am very happy."

"We have worked very well this weekend, so my thanks to the team. We started out in a good way yesterday, with a fairly competitive pace, then we worked to make things more perfect so that we can be competitive for one lap and also the whole race. This equals my best grid position in Moto2, so I'm happy with that, but now we have to be able to fight to the end in the race."

"This is our best weekend of the year, definitely. It's unfortunate that we are just starting to do well as the last race has arrived. We started well yesterday and we got even better today, with this fantastic front row. The race will be tough and close, but I am ready to give it everything."

"The equality of lap times here makes everything more complicated. After FP3 I was only 01 seconds outside the Q2 cut-off. During the Q1 session I tried to improve, but many riders are fast here. Maybe tomorrow I should do something on the bike to improve my feeling. I'm sure the race will be very hard."

"I've been working with the team, trying to bring the feeling from Sepang to here. That was my main motivation, and we worked from FP1 to improve continually. I'm happy with the lap time, but we have to test something tomorrow in warm-up, to help me in the entry of the corners. Hopefully, I can do well in the race to finish 2019 in a good way."

"I'm happy with this result. I wanted to take the pole but in any case second position is a very good place to start from. We are working very well with the team and we hope to be at the front tomorrow. We'll do our best until the very last moment."

"I went out with a good setup that we had found yesterday, so from the start we were able to be competitive. In FP3 I had a good pace, but I couldn't take advantage of the last tire because of the traffic on track. In Q2 I rode alone. I made some mistakes, but we have been equally as fast with used tires as with new tires, so that's ok. I searched for a rider to use as a reference and to ride close to, without trying to catch a tow. I think in the race there will be a large group. I hope to sign off the season with a good result."

"It's been a positive day because I've been riding by my own and I've managed to set my fastest lap times this way. I'll start from seventh position as in Malaysia. We've improved the bike and let's see if we can make a little step forward during warm-up. We are good, I have confidence. This is going to be my last race in Moto3 and I will give it my all. Many thanks to the team."

"I'm disappointed with this result. I felt not so bad during this weekend, but the lap times aren't coming, and sincerely I don't know why. Anyway, qualifying is finished and we cannot do anything about our grid position. Tomorrow we must push a lot from the beginning of the race and try to enjoy my last race with this team."

"We tried some settings from yesterday, but we haven't found the right one. The setting is also part of our problem, but 90 percent of it is me. I don't know why. But tomorrow I must find something during the race so I can follow the fast riders and work for 2020."