Marc Marquez (Repsol Honda Team RC213V) will defend his 78-point World Championship lead from the second row of the grid in tomorrow's San Marino Grand Prix. The 26-year-old Spaniard, who has won five of the last six MotoGP crowns aboard his RC213V, qualified a close fifth fastest after topping the earlier FP4 ‘race-pace' session.

Track conditions have been hot and slippery throughout the first two days of this event on Italy's Adriatic coast, with little grip available around the tight, testing circuit. Indeed Marquez found the traction limit at the end of FP4 when he slid off at slow speed. As always the focus of his crew and his HRC engineers has been to give the youngster a machine that will work at its best over the 27 laps, not over one fast lap. 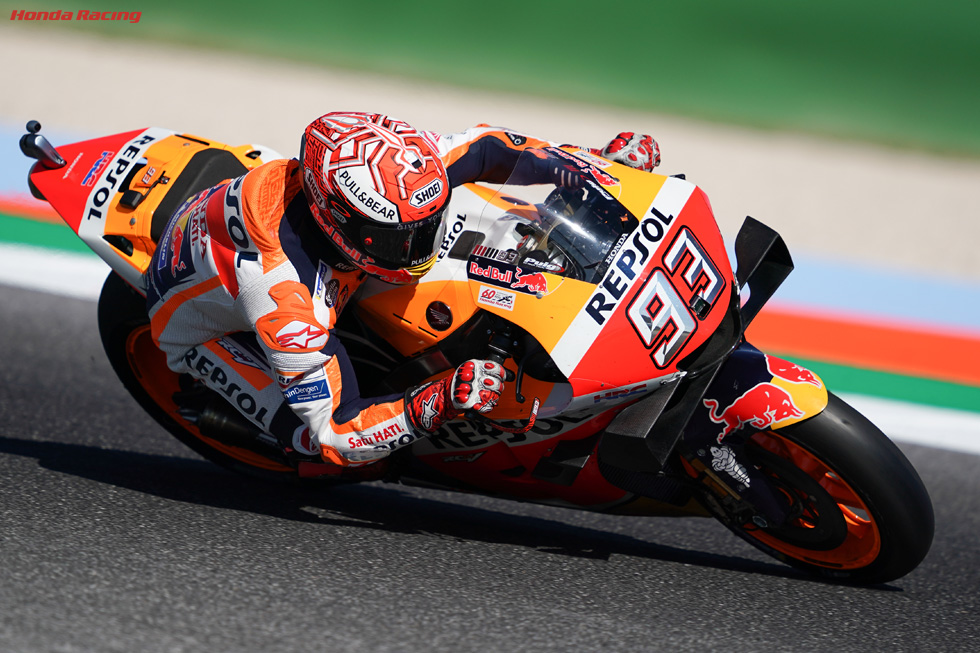 Marquez certainly wants to win the race – after losing the last two by a tantalizing 0.213 seconds and 0.013 seconds – but his primary target is to keep building his points advantage with six of 19 races remaining.

His pace in FP4 – when riders evaluate their machine in race trim – was very impressive, so there is no doubt that he has the potential to win at Misano, where he won the MotoGP race in 2015 and 2017, the Moto2 race in 2011 and 2012, and the 125cc race in 2010. This time his main opposition is likely to come from front-row starters Maverick Vinales and Fabio Quartararo.

Honda's next-strongest performer in qualifying was the ever-impressive Takaaki Nakagami (LCR Honda IDEMITSU RC213V), who will start from the fourth row of the grid. The 27-year-old from Chiba, who rides a 2018-spec RC213V, is chasing his tenth points score from the season's first 13 races; a remarkable record for a rider with relatively little experience in the premier class.

Cal Crutchlow (LCR Honda CASTROL RC213V) has had a challenging weekend so far. The 33-year-old Briton, who has already scored two podium finishes this year, has struggled to find front-end grip on the slippery asphalt, so he hasn't been able to attack the circuit as he did last year, when he finished on the podium, alongside runner-up Marquez. Today he qualified 14th and will start the race immediately behind team-mate Nakagami.

The Spaniard returned to action at the British GP three weeks ago and rode conservatively, steadily building up strength. Here he is much closer to the front on lap times than he was at Silverstone, so he knows that his comeback is going to plan. He will start the race from 18th on the grid. His aim is the same as it was at the last round: to complete the race to be in a stronger physical state for the next few races, commencing next weekend at Aragon, Spain.

Somkiat Chantra (IDEMITSU Honda Team Asia Kalex) once again had to learn a new circuit from scratch, riding his first laps of Misano yesterday morning. The 20-year-old Thai rookie who has excelled himself with points-scoring rides at two of the last three races and he will aim for more of the same when starts tomorrow's race from 19th on the grid.

Moto3 star Tatsuki Suzuki (Sic58 Squadra Corse Honda NSF250RW) scored a famous first pole position today, riding for the team run by Paolo Simoncelli, father of the late Marco Simoncelli, at the track named in honour of the Italian superstar, who lost his life at the 2011 Malaysian Grand Prix.

This was Suzuki's first pole, at his 84th Grand Prix, and sets him up for an excellent chance of scoring his first victory tomorrow. The 21-year-old from Chiba achieved his first podium at May's Spanish Grand Prix, where he qualified second and finished second to team-mate Niccolo Antonelli (Sic58 Squadra Corse Honda NSF250RW).

Suzuki will be joined on the front row by Spaniard Aron Canet and  Moto3's newest star Tony Arbolino (VNE Snipers Team Honda NSF250RW), who was just 0.127 seconds off pole.

Arbolino is on a superb run of form aboard his NSF250RW – the 19-year-old Italian won his first Grand Prix victories at June's Italian GP and Dutch TT and has followed that with three podium results from the last three races.

Antonelli was the next Honda rider, in sixth place on the second row, just once place ahead of World Championship leader Lorenzo Dalla Porta (Leopard Racing Honda NSF250RW). The 22-year-old Italian had a fraught qualifying outing, crashing halfway through the session. Although he was able to ride his bike back to the pits his crew was unable to fix the damage in time for him to re-join the track and attempt a faster lap. In the circumstances, he will be happy enough with a start from the top of row three.

Kaito Toba (Honda Team Asia Honda NSF250RW) qualified 23rd. The 19-year-old from Fukuoka, who is working hard to regain confidence after some difficult races, will work hard to get into the points.

After tomorrow's racing the paddock makes the 1500km/930 miles dash to Aragon, Spain, for round 14 of the 2019 MotoGP World Championship. 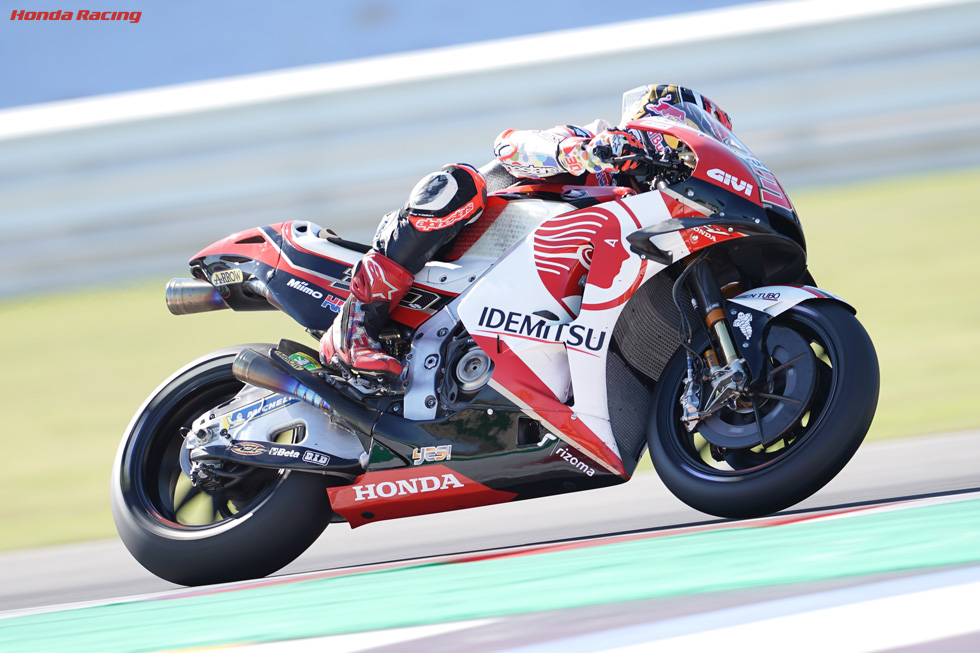 “It wasn't the best qualifying for us. Unfortunately I made a mistake on the second tire so I had to finish the run early. We start from the second row tomorrow so it is not a terrible day and we are aiming to fight for victory. Our goal is the championship and that is what we are focused on. I felt really good in FP4 aside from the small crash so I am quite confident in our race pace. In the last lap I was pushing at 100 percent for a fast time but came across [Valentino] Rossi and also ran wide out of the limit."

“I'm not so happy because we struggled this afternoon. This morning was better when the temperature was cooler, so the track conditions were better. In FP4 we focused on race simulation, but it was a real struggle to find grip when the temperature came up and the grip level dropped, which you can see in the lap times. It was the same in qualifying. I am the second fastest Honda but I'm not happy with my position or performance. Let's see what we can do tomorrow – we will try some more settings adjustments in morning warm-up. Let's try our best in the race, as always. A top ten would be a good result at this track in these conditions."

“Today wasn't a good day for us, as you can see from practice and qualifying, but this is the reality at this track. At the moment it's really difficult to ride around this circuit with the low grip, no matter what setting we try. However, I'm optimistic for the race, when I will do my pace and try to improve my lap times throughout the race to be as competitive as possible. All credit to my team and Honda who have worked very hard on the settings for me. I'll try my best in the race, whatever happens."

“For us it was a so-so day, I think after the Friday we had I was expecting to close the gap to the front a little more but we were able to make another step in qualifying. Still we need to make another step, but we already have some ideas for Warm Up. For the race we are aiming to finish as close as possible to the winner and I think we can make some progress forward."

“Today was so special – to get my first-ever pole position and my first front row in several seasons in front of the Italian fans. I expect a big fight tomorrow – tougher than today. Tomorrow morning we will try to find something more from the bike and then I will enjoy myself in the race. I really felt the crowd, cheering and singing. I am used to seeing this with the top MotoGP guys, but when they are cheering for me it's something else!"

“This is not an easy track for us, but when you are fighting for the World Championship you need to do everything you can to be close to the front at every race. This weekend hasn't been easy, so we are lucky that we had a good test here two weeks ago. Anyway, I think we have a good pace for the race and I have good confidence, so I will be able to push hard."

“It's good to be on the front row for the second race in a row. We have worked well this weekend at a quite difficult track, because there is not so much grip here. For sure Alex and Fabio have the pace for tomorrow, I just hope I do too! I am really looking forward to the race."

“My grid position for tomorrow is not as good as I expected, because in Q1 I made some mistakes in section three during my best lap. There I lost the chance to go into the Q2 session. But anyway, tomorrow I will try to continue improving. The key will be to make a good start trying to gain some positions."

“Today I've continued my process of learning about the track, the bike and the team. I'm happy because I've improved more than two seconds from yesterday. Despite that during Q1 I didn't have confidence in some parts of the circuit, losing a lot of time at those points. But my feeling is getting better and better every lap."

“This is so special for the team, for Paolo and for me. I am really happy and excited to be on pole position. This morning some other riders got in my way in FP3, so I was unable to go straight into Q2. We rode in Q1 and got into Q2. After that I wasn't expecting to get pole position, so I am so, so happy!"

“I am very happy for this first row, it's incredible here. We succeeded in doing a good job. At the beginning I was losing the rear and I couldn't ride well with the new tires but the experience of these recent months gave the result we expected and we understood the direction to follow. The support here is fantastic and tomorrow we hope to come back home with a smile."

“Like always, I have to say a big thank you to my team, because this afternoon we made a big, big improvement with the bike and with my lap times. We were a bit worried after FP1, FP2, and FP3, but when we mattered we were able to do a great lap time. My aim will to get away well and try and keep the pace of the fastest guys to the end of the race. Congratulations to Suzuki san for his first pole – this is great for him and the team, especially here at Misano."

“Today we made a significant improvement comparing to yesterday, but I couldn't do a good lap in qualifying. I will start from P11 tomorrow, but I think I'm ready for the race. The beginning of the race will be difficult because the pace will be fast, but I will try to follow the group, waiting for the last laps. If I can fight until the end it will be nice."

“Today, it was difficult to get a good lap time. The feeling is coming better and I think I have a good pace for the race. I know that to start from 23rd position is not the best, but I'll push from the beginning, trying my best."