Marquez and Crutchlow on Second Row at Assen 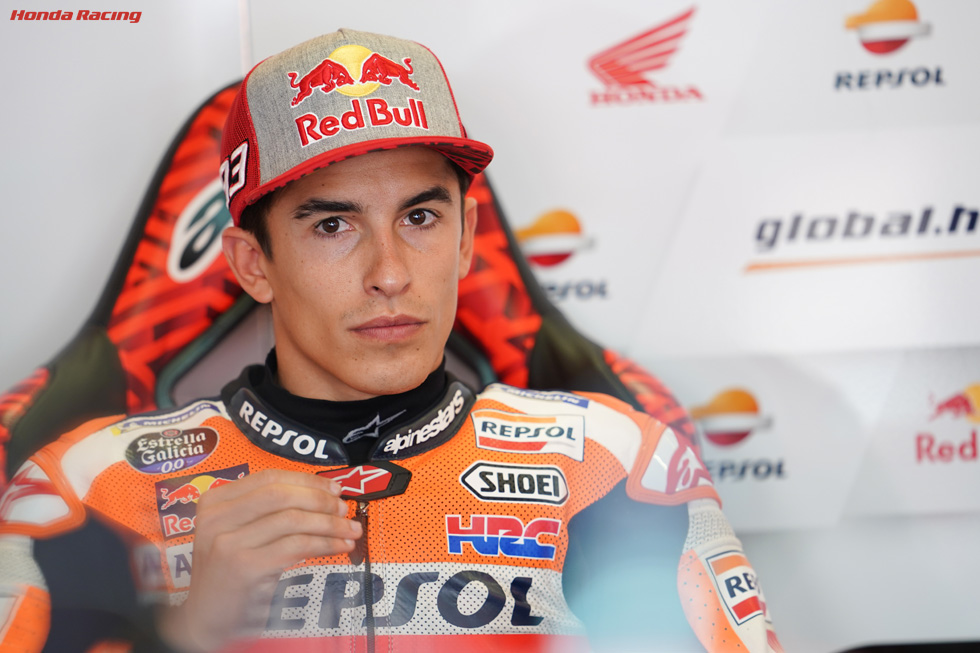 This afternoon’s Q2 qualifying session – staged in unusually warm and sunny conditions for Assen – was super-quick and action-packed. Four different riders took their turns at the top during the 15-minute session, with the quickest three all inside the track’s all-time lap record.

Marquez led the early stages, then had to perform one of his magical saves at turn one soon after he had started his second run. That no doubt blunted the 26-year-old Spaniard’s challenge and he had to be happy with fourth place, 0.273 seconds off the front row. This is the first time he has qualified off the front row this season, but the five-times MotoGP World Champion isn’t concerned about that, because the race pace he rode in the earlier FP4 session was excellent.

Marquez goes into the eighth round of the championship holding a 37-point advantage over his closest pursuer. Last year he won an unforgettable multi-rider battle for victory at Assen and is confident he can once again challenge for a podium result tomorrow.

His team-mate Jorge Lorenzo (Repsol Honda Team RC213V) was forced to withdraw from this weekend’s proceedings after falling heavily during yesterday morning’s FP1 session. The three-times MotoGP king went down at the high-speed turn seven. While tumbling through the gravel run-off he sustained a stable fracture of his T6 vertebra and a trabecular fracture of the T8 vertebra. After undergoing tests and treatment at a local hospital the 32-year-old Spaniard has returned to his home in Lugano, Switzerland.

Crutchlow rode an excellent qualifying session to go sixth fastest, five tenths slower than Marquez. The result was thanks to the 33-year-old Briton’s dogged determination and hard work, following a challenging Friday and ninth place in this morning FP3 outing. As usual, Crutchlow dug deep this afternoon, when it really mattered.

Takaaki Nakagami (LCR Honda IDEMITSU RC213V), who won the Moto2 race here in 2016, has had another strong weekend. The 27-year-old from Chiba fought back from a difficult Friday to finish the first three practice sessions an excellent fifth fastest, only four tenths of a second behind pace-setter Fabio Quartararo. Nakagami just about repeated that performance in qualifying, going sixth fastest, but that lap was cancelled because he had fractionally exceeded track limits at the chicane, so he ended up with eighth fastest time, to put himself in the middle of the third row.

Tomorrow’s MotoGP race will be preceded by a lap of honour by two Honda racing legends, the climax to this weekend’s celebrations of Honda’s 60th anniversary of World-Championship racing.

Kunimitsu Takahashi, who in 1960 became the first Japanese rider to win a Grand Prix race, will ride a Honda RC142, the machine with which Honda began its world-class racing adventure at the 1959 Isle of Man TT. And five-times 500cc World Champion Mick Doohan will ride a 1989 Honda NSR500, which Eddie Lawson rode to that year’s 500cc world title.

Both riders were knocked down by rivals during practice. Ekky Pratama was taken out during Friday practice and was treated at the circuit medical centre and Assen hospital. The 26-year-old Indonesian wasn’t seriously injured but he was hurt enough to take no part in today’s proceedings.

Chantra was knocked off at slower speed in this morning’s FP3 session. Despite the crash the 20-year-old Thai was back on track for qualifying and will start the race from 20th on the grid.

The front row for tomorrow’s Moto3 race is all-Honda and the first man on the second row is also on an NSF250RW.

The last man on the front row is Tony Arbolino (Snipers Team Honda NSF250RW), who won his first Grand Prix at the start of the month in Italy. The 18-year-old Italian was just 0.013 seconds behind Toba.

Antonelli’s team-mate Tatsuki Suzuki (Sic58 Squadra Corse Honda NSF250RW) was fourth quickest, a mere 0.071 seconds short of the front row. Tomorrow the 21-year-old from Chiba will aim for his first podium result since he finished second at Jerez, behind Antonelli.

Ogura also had an excellent qualifying session, good enough to put him on the second row of the grid, which should allow him to get away with the lead pack tomorrow. And he was less than four tenths of a second off pole.

Despite his DNF at Barcelona-Catalunya two weeks ago, Lorenzo Dalla Porta (Leopard Racing Honda NSF250RW) still holds second place in the Moto3 points chase. The 22-year-old Italian didn’t have the best of times in free practice here, so he had to come through Q1 to make it into Q2, ending the session eighth fastest for a third-row start.

At the end of Assen race day the paddock will pack up in a hurry to travel to the Sachsenring for next weekend’s German Grand Prix. 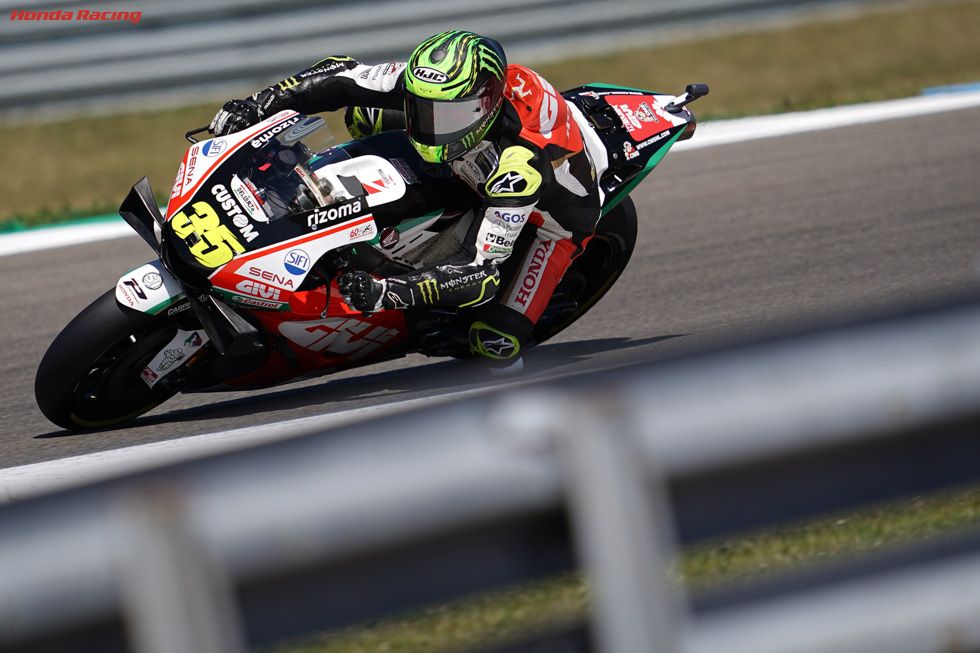 “I’m happy with the race pace and we knew before the qualifying that it would be tough, as there is more competition than normal. It looks like in the morning it is a little tricky but then in the afternoon when the conditions get warmer we are there. I think it’s going to be a very close race tomorrow and there are four or five of us with good pace. Normally it’s a circuit where we struggle, but in Mugello normally we struggle and we got second and in Montmelo we struggled and won.”

“I qualified sixth, but I didn’t really have the pace for sixth, it was just lucky that nobody had the pace to get past me on the second run. We’re working hard, but the reality is we’re probably about the tenth quickest guy, but last year it was a ten-man battle at the front at one point so we’ll have to try and make some improvements in the morning. I didn’t feel much better on the bike today even though we tried more or less everything as always, from my point of view it’s clear where we’re losing time and we are working on it. We’re trying our best and I’m pleased to be on the second row.”

“I’m quite happy, because it’s quite a big improvement from yesterday from FP2. I’m a little disappointed because I think qualifying was there to attack and when I saw the chequered flag I was P6, but after that I checked the second screen and I was P8 which I didn’t understand. But we spoke with race direction to see where I cut the track limit and I understand maybe the last chicane, on the right. But I am really close to the second row and we are improving all the time. It’s a really long race tomorrow and hopefully we can make no mistakes and be very focused during the race.”

“I had a good FP3, but when I went out for qualifying the bike was sliding around, so it was difficult to make a good lap time. I came into the pits and they fired in a new rear tyre and it felt much better. Doing a good lap was more difficult in the heat, but at the end I got in two good laps. My dad was on the phone when I got back to the box, so that was great. I feel good now – I’m back in shape after breaking a collarbone at Jerez.”

“It feels so good to be back on the front row again. This shows that KTM are working really well, after some difficult races. I can’t wait to try the new stuff we’ve got over race distance, so this is going to be an important race for us. It will be close at the front, so we will have to ride a clever race and see what we can do in the final laps.”

“Finally, I am back on the front row and this is a great reward for all the hard work the team and I have been putting in since Jerez when we were struggling. We made a good step forward during the race weekend in Barcelona and at the test afterwards. We found a base set-up that is relatively standard but it allows me as a rider to make a difference with changes to my style. The objective this weekend was not to make so many changes to the bike and we did this thanks to an incredible job by my team. Every adjustment we made this weekend has improved the bike and I pushed so hard to make the front row. I am enjoying riding the bike again and I’m looking forward to the race. It will be a hard race in the heat but I think we have shown good pace and we are ready to fight at the front again tomorrow.”

“I had the chance to be in Q2, but I made many mistakes in Q1, so finally I will start from P20. In FP3 we planned the practice in order to assure a place in Q2, after finishing in P11 yesterday, but Navarro hit me and I crashed, which lost us a lot of time and also damaged the foot that had surgery after my crash at Le Mans. I improved but it was not enough. In any case, at a new circuit for me, especially a track as difficult as Assen, I’m happy about my lap time and my pace for tomorrow.”

“So many riders are so fast here, so I pushed very hard in qualifying and I’m very happy to get pole position. The most important thing in Moto3 is consistency in race results, especially this year because there are so many strong riders and that’s why it’s so easy to make a mistake when you are in the pack. Tomorrow the important thing will be to make sure I am in the top six or seven at the start of the last lap and then we will do what we can to make the podium.”

“I was very close to my first pole position but second on the grid is okay. I think we’re very competitive, so we are ready to fight tomorrow in the race. We need to keep working like this. We will try to get a victory again or to be in the podium. For sure in the race there will be a big group, but I will try to reduce the group by pushing from the beginning.”

"I expected something more. I am happy for the first row but I am not completely satisfied as I had only one lap to go for my target, but I made some mistakes in the last corners which didn't allow me to catch the pole. Concerning tomorrow, there are many riders with a good pace. We'll see what kind of race it will be. The most important thing is to stay in the lead group and fight for the podium in the last laps."

“I’m happy about the grid position for tomorrow. We are consistent and we have a good pace, which I think is the key point for the race, which means I’m confident for tomorrow. The lap time of the top 20 riders are quite close, so I think the race will be a group of 20 riders, or maybe three groups of seven, but it will very tight from one rider to another.”