Danial Sharil took his first ever Idemitsu Asia Talent Cup win at Chang International Circuit, attacking to perfection at the final corner in another classic contest that went down to the wire. The Malaysian attacked Haruki Noguchi at the final corner to take the lead, and stayed just ahead of a last dash move from Bill van Eerde to take the checkered flag ahead by thousandths and move up to third in the Championship. Van Eerde, after qualifying in P19, stunned the field with his comeback and even extended his points lead at the top of the table, with key rival and polesitter Haruki Noguchi beaten back into P3.

It was Sharil who took the holeshot but from the head of the second row as the Malaysian rocketed up into P1. From there, however, he did have to look back – with a group fight first between the top six and then all the way throughout the top ten as the second group caught those squabbling up ahead. At times it seemed Noguchi could break away but the Japanese rider was chased down each time, and the slipstream around Buriram proved pivotal for those on the chase. 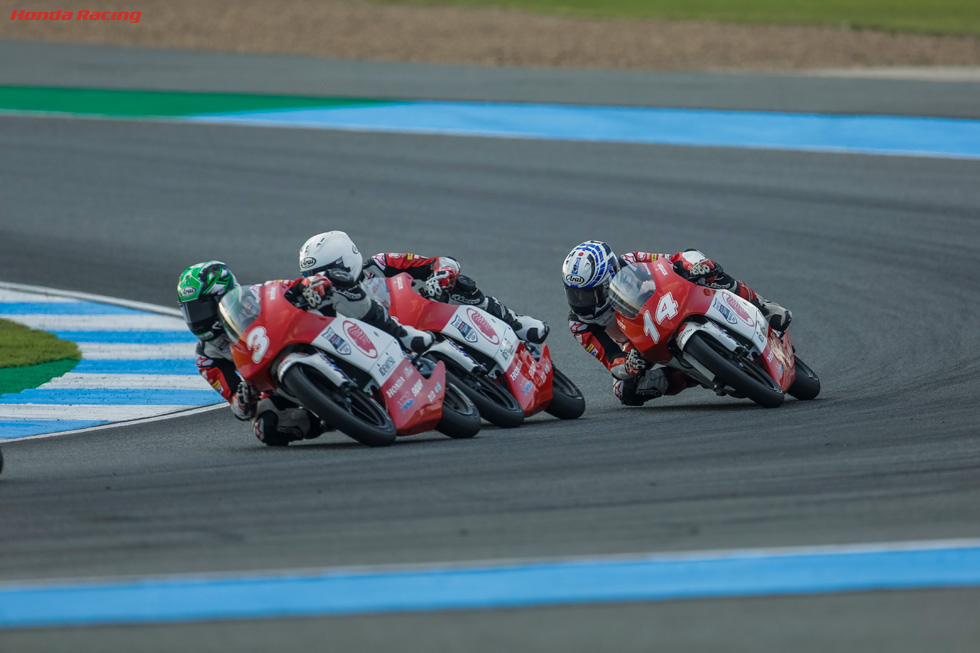 With 11 riders in the front group as the laps ticked down, it was anyone's to win – and the final corner seemed like it could throw up some fireworks. That it did, with Sharil attacking Noguchi after a manic final lap and the Japanese rider heading a little wide – leaving room for van Eerde. The Australian, who earlier in the race overtook a group of riders in one, had already showed he needed no second invitation – and he took the gap at full gas to get into the drag race to the line against Sharil.

Neck and neck, it seemed the Australian could pull off the nigh on impossible and go from P19 on the grid to the top step, but Sharil had a good exit too and made the most of it – crossing the line 0.021 ahead to take his first victory. Van Eerde's second place extended his lead, however, with Noguchi left to lock out the podium.

One key name missing from the fight was Mario Aji, as the Indonesian was an early crasher and put a dent in his title hopes. Fellow crashers included Tachakorn Buarsi, a front row starter on home turf who befell some late race heartbreak but still took P13, as well as Japanese rider Toshiki Senda. They'll be pushing for more in Race 2, which begins at 15:30 (GMT +7) local time.

Double Delight for Sharil as Van Eerde vs Noguchi Heats Up

Malaysian makes it a clean sweep at Chang International Circuit as the points leaders end the race off the rostrum.

Danial Sharil made it a race weekend to remember at Buriram as the Malaysian did the double and took victory in Race 2. That moves him even closer to the top in the title fight into a secure P3 overall, with the second contest of the weekend proving a bit more costly in the standings for key protagonists Bill van Eerde and Haruki Noguchi after a final corner fight. It was instead Sho Nishimura and home hero Tachakorn Buarsi who completed the podium, capitalising well in the last corner melee. 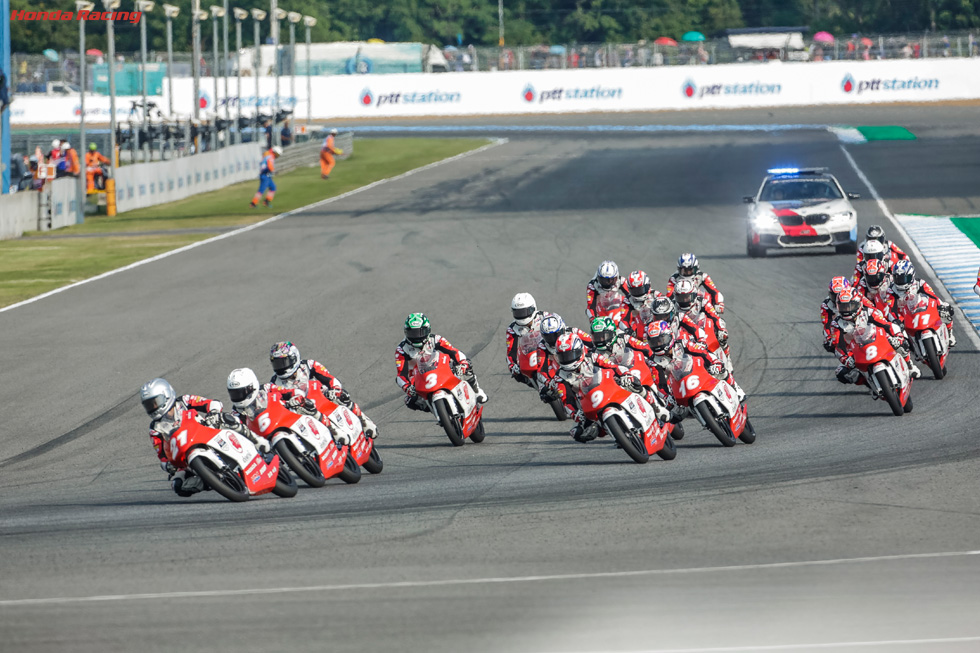 Sharil took the holeshot from the second row, with the Malaysian heading what was a big group at the front once again, but this time from the off. Bill van Eerde also repeated his stunner of a start from Saturday and was knocking on the door to the top five early doors.

It truly was a battle royal in the group, with Sharil and Noguchi the only riders who briefly looked like they may be able to make a break. The chasing pack soon reeled them in though, and the squabbling ricocheted through the top ten.

By the final lap it was anyone’s game but Afridza Munandar thought it was his as he celebrated a little early before getting his head down again for another four kilometers of mayhem. Coming into the final corner for the last time it was Sharil who was steadfast once again, and the Malaysian was able to steer clear of the drama behind to take his second win.

That drama came courtesy of Noguchi as the Japanese rider lunged up the inside of points leader van Eerde, but he headed wide and the Australian was forced out with him. Heading through the run off and losing drive to those behind them, it was Nishimura and Buarsi who slipped through to follow Sharil over the line and complete the podium. That made it more home glory for Thailand after an impressive showing from former Idemitsu Asia Talent Cup Champion Somkiat Chantra in his Moto3 wildcard.

Lucky Hendriansya took fourth after a solid race, with Mario Aji bouncing back from a tough end to Race 1 to take fifth - and gain some points in the Championship. Then came Noguchi and van Eerde in that order, with Munandar pushed down to P8. Kopchai Sae-liw put in a solid home race for ninth, with Adenanta Putra completing the top ten after running wide late on.

That’s it for Round 4 and now we head for the Twin Ring Motegi, with Noguchi trailing van Eerde by seven points as we touch down on home turf for the Japanese rider. Anything can happen and it certainly will as the Idemitsu Asia Talent Cup returns in two weeks for the penultimate round of 2018.