Race week for the Suzuka 8 Hours Endurance Race (Suzuka 8 Hours), a mid-summer highlight for motorcycle racing fans, has begun. On July 24, Day 1 of the second official joint test, and the following day, 66 teams participated. These tests are new this year, conducted just prior to the Suzuka 8 Hours to level the playing field, as it is difficult for teams racing in the FIM Endurance World Championship (EWC) to participate.

All three Red Bull Honda (#33) riders, Takumi Takahashi, Ryuichi Kiyonari, and Stefan Bradl were on hand for the tests. Takahashi, who had set up the bike, observed how his teammates evaluated his efforts, by allocating most of the track time to Kiyonari and Bradl. Yet, Takahashi managed to set the fastest lap in Session 1, of 2min 6.670s. Kiyonari and Bradl lapped in the 2 min 8s range, concentrating on becoming accustomed to the bike.

F.C.C. TSR Honda France (#1) riders Josh Hook, Freddy Foray and Mike Di Meglio arrived in Japan to attend a Suzuka 8 Hours fan meet at the Welcome Plaza Aoyama within Honda’s Head Office. The three riders had been testing their bike from the end of June, through the July official test. The three riders headed into race week after spending nearly three weeks together. Josh Hook set the fastest time of 2min 7.236s in the second session on Day 1.

For MuSASHi RT HARC-PRO. Honda (#634), Ryo Mizuno allocated an even amount of track time to Dominique Aegerter and Xavi Forés, listening to their feedback, and concentrated on perfecting the bike’s setup. Mizuno was third fastest in Session 1 with 2min 7.616s, and Aegerter had improved to 2min 7s. Forés improved his lap time to 2min 9s. 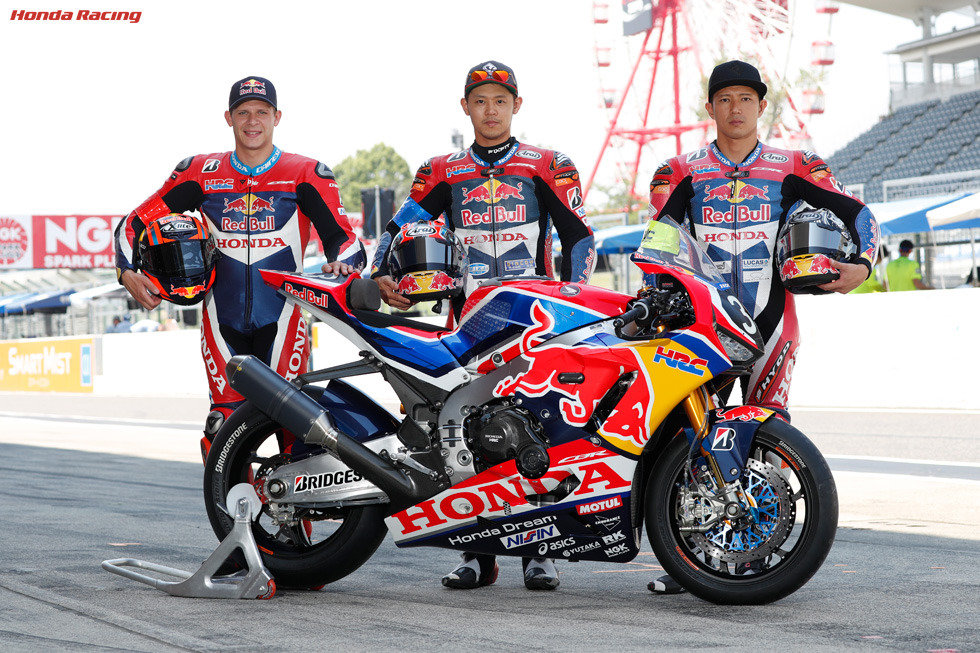 On the 25th, Day 2, Session 3 was held from 1:30 pm to 2:30 pm, and 4:00 pm to 5:00 pm. Ambient and track temperatures were as unforgivingly hot as the previous day. Honda best was F.C.C. TSR Honda France’s Di Meglio at 2min 7.178s, the second fastest time. Close behind was Red Bull Honda’s 2min 7.230s, the third quickest. Teammates Kiyonari and Bradl were in the 2min 8s range. Sixth fastest was MuSASHi RT HARC-PRO. Honda. Mizuno crashed at the final turn of the final session, and although the bike was damaged, he was unharmed. Team manager Kotaro Honda commented, “Xavi [Forés] is new to the Suzuka 8 Hours, so we had him focus on handling back-markers and tires, so he can make that second nature.”

Team ATJ with Japan Post (#44) was 11th fastest, and au・Teluru SAG RT (#090) was 12th. Both teams lapped in the 2min 9s range. Honda Suzuka Racing Team (#25) was 13th, and one place behind was Honda Asia-Dream Racing with SHOWA’s Md Zaqhwan Zaidi setting a 2min 10.067s lap. His teammates Andi Farid Izdihar and Teppei Nagoe also finished in the 2min 10s range. The team plans for a seven-stop strategy, so concentrated on fuel efficiency testing. Honda Asia-Dream Racing with SHOWA’s team manager, Makoto Tamada, said “with Nagoe here, we need to confirm how he fits in, so we’ll prepare for long stint testing from tomorrow. We have to improve our pace so there’s a lot I want to do, but I want to do it well.”

KYB MORIWAKI RACING (#19) was 17th fastest, Honda Endurance Racing (#111) 18th, and Honda DREAM RT SAKURAI HONDA (#72) 21st. Conditions for the previous test were cooler, so teams were busy making adjustments for the heat for the past two days. For tomorrow, the 26th, teams will head into the official qualifying after a free practice session. 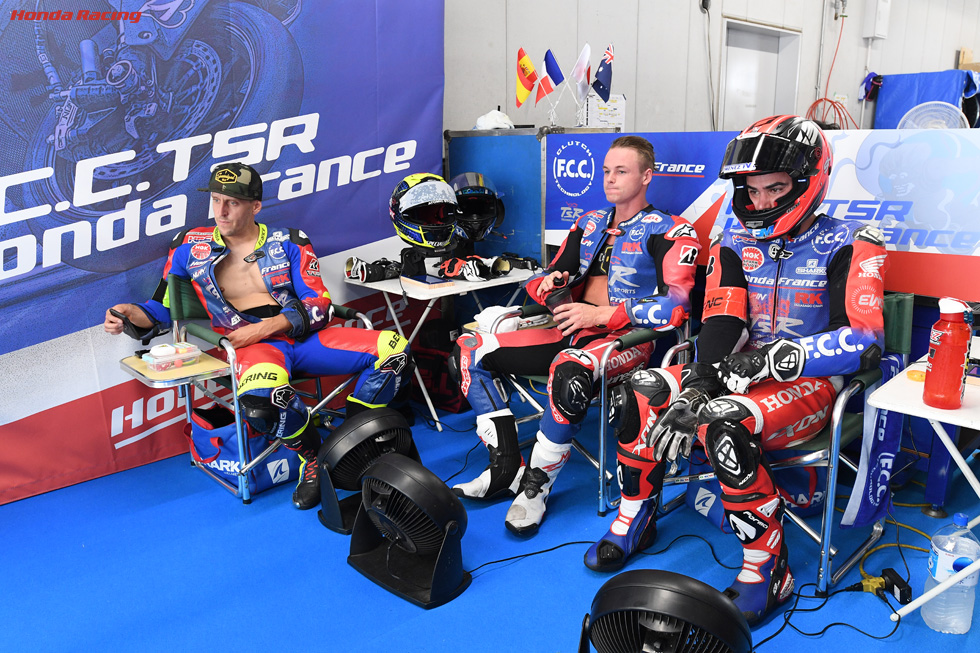 “It’s good that we’re now certain that Kiyonari, Stefan [Bradl] and I want to set up the bike in the same direction. All three of us only got together after race week started, but we all have similar opinions. The potential of the bike is not bad, so we want to improve it for the race. I want to take the other two riders’ opinions into account to set up a bike that’s easy for all of us to ride.”

“Takumi [Takahashi] really knows how to set up a bike that’s easy to ride. What I have to do is get accustomed to it. Yesterday, tire grip was a problem for some reason, and I couldn’t handle it too well. I’m the kind of rider whose time and feel get better the more I ride, so I focused on that without changing the bike’s setup.”

“The past two days were good for testing. I managed a long stint, and I’ve got the feel for the race, so I’m mentally prepared. After the MotoGP tests in Malaysia, I’m accustomed to the heat, so that won’t be a problem. It’s hard getting accustomed to the bike because I’m moving between Suzuka 8 Hours and MotoGP, but I’ve found a good compromise, and I’m looking forward to the race.”

“Today was hot, so I think race day will also be hot. I’ve done a lot, such as riding on used tires, during the two day tests. The bike is great. It felt right from the start, and I could ride it smoothly. I think it’s a great package for the Suzuka circuit. I’ll do my best to ride better than anyone, to give us the edge on our rivals.”

“Sunday is the important day, so the whole team is working hard towards the race. Everything is going well so far. The tires are different to the EWC races to date, and match the track surface and climate of Suzuka, so it’s important to understand that well. We have the speed, so I’m looking forward to the race.”

“The bike is great, and we’re fast. We have a better pace compared to the others. Most important, all three riders are consistently fast. The EWC points leaders have the advantage, so we’ll try to win the Suzuka 8 Hours. If we can do that, the championship naturally becomes ours.”

“The track conditions are completely different from the previous tests, so it took time to set the bike up right. We concentrated on improving our average lap times during this test, which went well. We want to be a bit faster, but for now, this test was satisfactory.”

“The track temperature was high for the past two days, so it was hard to ride the same way as the previous tests. That said, my teammates adjusted well, and the bike is blazing fast, so it was a good test, and a lot of fun. We’ll keep on preparing for the race.”

“It was a busy test, but I put in many laps and managed to improve my feel, so I’m satisfied. The test was great in gaining confidence for the race, so I’ll continue doing my best tomorrow to contribute to the team.”

“We managed to simulate race conditions, and cover everything we planned for the test. All teams face the same ambient temperatures and changes in track temperature, so we’ll push ahead with our team’s strengths. It’s really positive that Troy [Herfoss] set his personal best lap time today. I think the riding styles of the three of us are getting closer to a well-balanced state.”

“A lot is different to the previous tests, because of the heat, and we had trouble finding the right setting over the past two days. Honestly, it’s a bit difficult. We’re still having problems with finding the right balance between the three riders. We have our fast laps, but we need superior average speeds to win the Suzuka 8 Hours, so we’ll be working on that tomorrow.”

"We are very good teammates, and we understand also the bike. We have to set the same seat position, but our riding styles are different. The electronics can help us, but suspension can't be changed. So, we’re still fighting to get a little bit of change with which setting we go with. Most important is also to be fast for all eight hours, not only for one lap.

“Tomorrow our goal is to be in the top 10 speed-wise, but that should be no problem. There are many fast riders and teams, from Japan, from Europe, but we are a high-level team. The starting position isn't too important. We are concentrating more on racing for eight hours. My goal is to finish on the podium, hopefully on the top."

“Compared to yesterday, today is much better for me. I'm trying to understand a little bit more about the bike, tires and everything. It's my first time racing here, so I need to adapt myself on the bike. They were not so bad laps, hopefully on the weekend it will be a good pace and interesting race for us. The circuit is amazing. I'm enjoying it a lot because the lines are really nice. The weather is similar to Thailand where I ride in Superbike. We try to keep our bodies in good shape. Ryo is riding really fast, also Dominique and I'm always improving my lap times. We will stay focused lap by lap during the race on Sunday. Our target is getting on the podium. If there is no mistake, we can fight for it."

“For today my feeling not big different, I just want to change some setting, but time not enough. And we need to check fuel consumption on each rider, that make we need to change rider often to focus on pit work also. So we looks forward for tomorrow practice."

“For today test 1st run we try some change setting and it was good, last session we did pit work and all doing well. For me today positive day for us and we will keep focus for tomorrow again."

“Second day a bit difficult for me and we have many change on setting and rider during session. Now bike going on good direction. For tomorrow on QP, I will do my best and my target lap time is 08."

“Today we plan to have long run again but condition still same, it had many red flag and all our riders not so much time on the bike, it’s may effect to our progress. Anyways, last session today we focus on pit work practice each rider only have 3 laps for changing rider to did race simulation. So tomorrow have 1 more practice before QP and I trust that riders will improve more and get good QP result. Rider and team will continue keep hard working until race day."