Since 2017 the Suzuka 4 Hours Endurance Race (Suzuka 4 Hours) has been staged as a semi-international race. Riders with international and Japan-domestic licenses compete in the event, and in recent years, Asian riders have been showing their skills. Astra Honda Racing Team (#7) fro Indonesia won their debut race in 2013, and again in 2016, and returned as one of this year's favorites. 2016 winner IRFAN ARDIANSYAH paired up with Lucky Hendriansya. The two riders are teammates in the Asian Road Racing Championship (ARRC) AP250 class. Another contender was A.P.Honda Racing Thailand (#149), entrants since 2016. Team rider Piyawat Patoomyos returned this year to be joined by Muklada Sarapuech, her first time at the 4 hour race. Goshi Racing (#54, Chisato Katayama / Karen Ogura) also attracted attention as a ladies team.

The morning of the 27th saw a wet track with intermittent rain and strong winds. The Yamaha of Otojiro Tanimoto / Hiroshi Fukui commanded the opening lap, ahead of Ardiansyah and Sarapuech. On Lap 2, Sarapuech moved up to 2nd, and at the final chicane, took the lead. Sarapuech, Tanimoto and Ardiansyah formed to lead group, pulling away from the other riders. 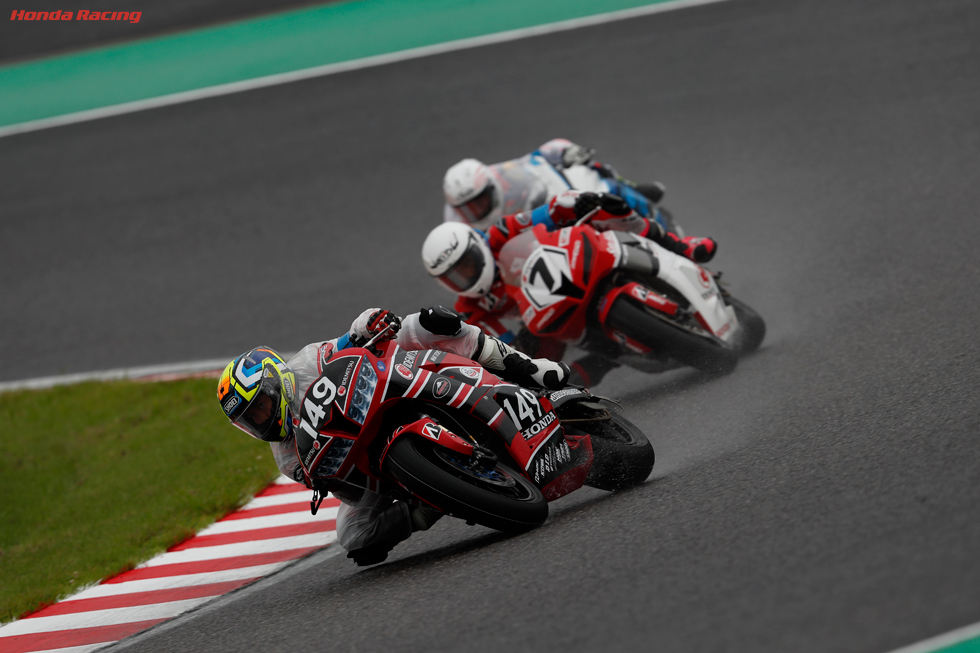 On Lap 4, Ardiansyah moved up to 2nd. On Lap 6, Tanimoto retook the lead in a heated battle with Sarapuech 2nd and Ardiansyah 3rd. The top riders started to lap the slowest on the track on Lap 8, and two laps later, rain started falling. On Lap 12, Tanimoto led Ardiansyah and Sarapuech, but three laps later Sarapuech moved ahead, and on Lap 18, Ardiansyah tumbled at the 130R.

One hour into the race, the rain stopped and the sky began to clear. Sarapuech handed his A.P.Honda Racing Thailand bike to Patoomyos, who was back on the track with their lead intact. Fukui (Yamaha) was 2nd at this stage. By Lap 30, Patoomyos had increased the gap with Fukui to 42 seconds, showing no sign of slowing. Ogura moved up to 4th by this time.

At the two hour mark, A.P.Honda Racing Thailand (Sarapuech / Patoomyos) still maintained their lead, with Yamaha (Tanimoto / Fukui) 2nd and Yamaha (Seiji Yasutomi / Satoshi Masuda) 3rd. Rain started to pour heavily. With teams completing their second rider changes, the race entered its second half. Sarapuech was in front by two laps ahead of Taniguchi, continuing to build a more and more commanding lead. Yasutomi moved up to 2nd, but crashed at the 130R, and with other riders following suit, the red flag was waved at 11:40 am, stopping the race. The rain was relentless, putting an end to the race.

A.P.Honda Racing Thailand (Sarapuech / Patoomyos) was declared winner, making Sarapuech the first female rider to win the event. The Kawasaki of Sohei Uegaki / Syouma Hashiguchi was 2nd, and the Honda of AUTO LIFE HANO & A-PLAN + Run Run (Shinichi Hano / Takashi Fukuda) was 3rd, its two riders in their forties on the podium for the first time, riding a revival bike.GOSHI Racing (Katayama / Ogura) finished 5th overall, 3rd in the Japan-domestic license class. The Japanese ladies team of Ogura and Katayama on the podium were barely adults, 20 and 19 years old, respectively. The two riders vowed to return next year, this time to win. 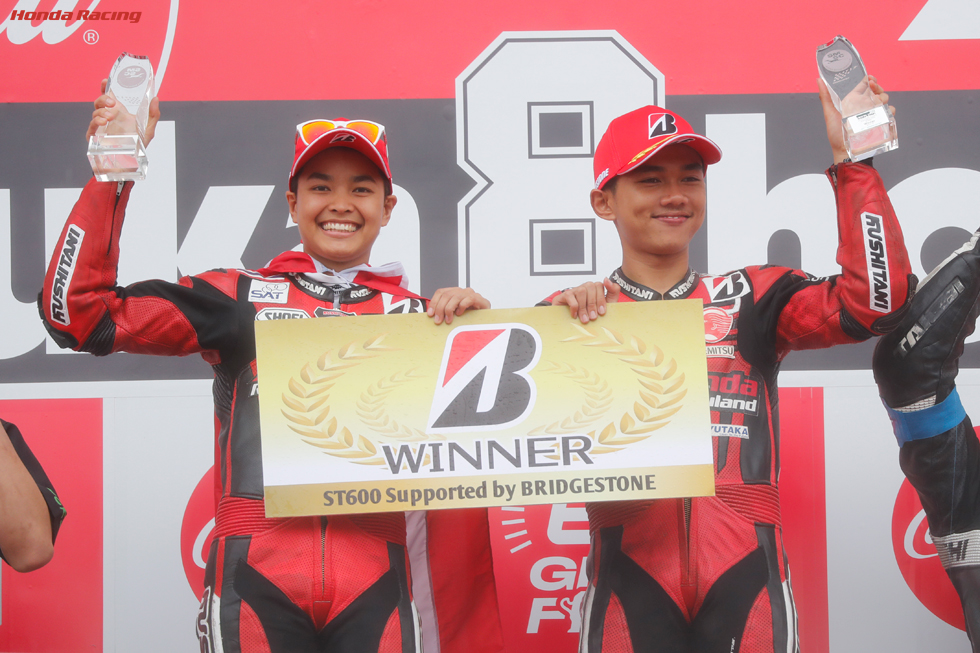 "I raced here last year, so this is my second Suzuka 4 Hours. I'm grateful to A.P.HONDA RACING THAILAND. I'm also grateful for all the fans from Thailand who supported us. The team gave everything they had, which led us to victory in the Suzuka 4 Hours. I'm simply overjoyed. The biggest advantage is that I had great teammates. We could win because I raced with Muklada."