Fueled by Home-use Butane Gas Canister Designed as a Gardening Tool, not a Work Machine

Honda has been manufacturing gasoline engine-powered compact tillers since 1959. Traditional tillers were designed to increase productivity as a “work machine,” focusing on functionality to make work easier.

In recent years, home gardens and gardeners have been increasing, as part of an enriched lifestyle rather than work. The demands for tillers, in addition to work-related functionality, have shifted to include “ease of fuel handling,” “ease of tiller storage and transport,” and “environmental-friendliness.”

In planning “home-use power products” to meet these new demands, Honda considered butane gas, widely used in Jananese households, as a power source. This led to the development of the Pianta Mini-Tiller, powered by home-use gas canisters readily purchased, used and stored.

Honda developed a new gas supply system to make the Pianta an easier, and approachable tiller. 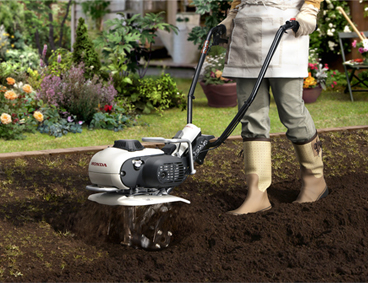 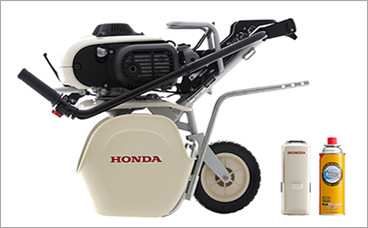 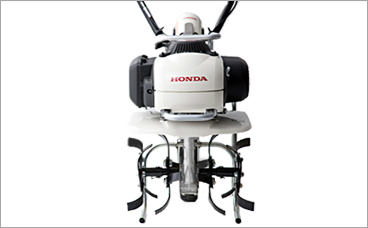 2. Technologies Behind the “Three Easy’s”

The Pianta’s benefits gained by using canister fuel, and other benefits such as the ability to be transported by car and easily stored, are described by the “Three Easy’s.”

With gasoline-powered tillers, fuel needs to be purchased in portable cans, and transferred from can to gasoline tank. As the Pianta is powered by readily-available gas canisters, fuel purchase, use and storage is simplified. Gas also enables smooth operation after a prolonged period of storage.

The Pianta also avoids engine problems due to impurities left after fuel vaporization, by separating the impurities within the regulator. 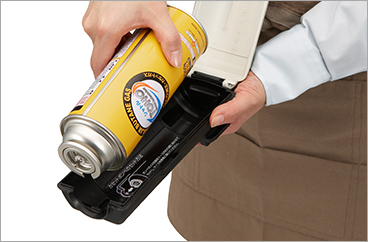 Tillers, in general, are difficult to transport even over short distances, requiring the owner to either drive the tiller, in case of a gasoline-powered tractor tiller, or to purchase and attach separate replacement wheels. A carrying stand with built-in wheels was developed as standard equipment, to ensure smooth, easy transport.

The Pianta features a carrying box that can be attached without lifting the Pianta off the ground, allowing the tiller to be transported without soiling the user’s clothes or the transport passage. The Pianta’s size also allows for easy storage and transport. 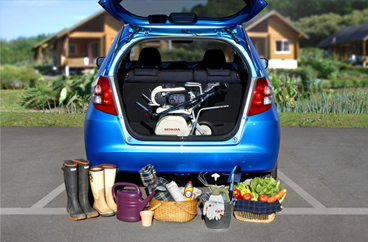 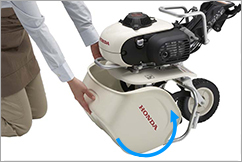 Carrying box can be attached / detached
without lifting the Pianta 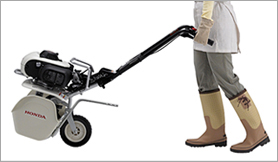 The Pianta can be transported without soiling transport passage 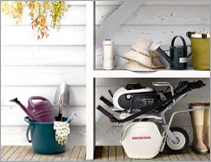 Choke operation, such as with gasoline engines, is not required: Grasp the throttle lever to start the engine, and let go to stop the engine. No tools are required to fold the handle bar or to adjust the resistance rod height to set tilling depth.

A new canister attachment system was developed for the Pianta, to ensure confidence in using gas canisters outdoors. The canister case protects the canister from vibration, direct sunlight and rain during operation, and ensures the canister is attached in the correct direction and angle (important to completely use the gas to a level where the canister can be safely disposed).

This system, albeit simple, is designed to securely attach the canister. 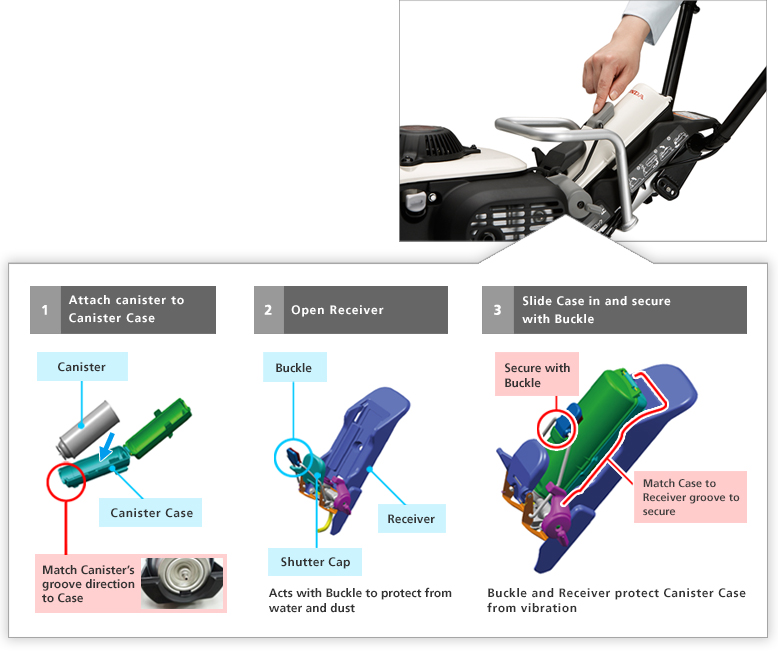 Gas is Extracted in Liquid Form

With gas-powered engines, temperature control is not as simple as a portable gas stove with which fuel is burned at a constant rate, as the amount of heat generated depends on the load applied to the engine.

With the Pianta, N-butane is extracted from the canister in liquid form, and vaporized utilizing exhaust heat. Vaporization within the canister and resulting canister heat loss is minimal, allowing for a consistent fuel supply - necessary for stable operation of the engine that powers the tiller.

Pianta’s engine extracts the N-butane from the canister in liquid form, and uses exhaust heat to vaporize it to a usable state.

2) By opening the gas valve lever, the fuel (liquid gas) flows within the regulator, before the shut-off valve.

3) By pulling on the recoil and turning the crank over, negative pressure opens the shut-off valve, causing the fuel (liquid gas) to be vaporized by the pressure difference while flowing through the regulator valve. Vaporized fuel then reaches the mixer, where it is mixed with intake air, and supplied to the combustion chamber.

4) Once the engine has warmed up, the exhaust-heated vaporizer is used to vaporize the fuel (liquid gas).

The Pianta’s engine employs mechanisms (The Labyrinth mechanism and Impurity Cup) to separate and gather impurities from the vaporized butane gas, in order to prevent the impurities from entering and causing problems in the engine.

As an added safety measure, caps are equipped with pressure sensing valves to stop the engine in case of abnormally high pressure within its piping. The regulator’s shut-off valve automatically cuts fuel supply when the engine is turned off. 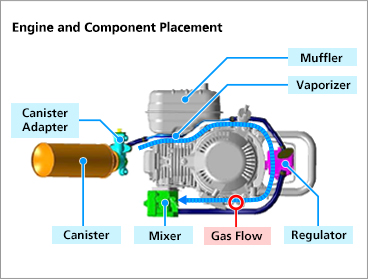 While researching how tillers were used in home gardens, Honda found tiller usage to predominantly begin in March to April for seed sowing, and the average temperature at around that time was 5°C or above. Pianta’s engine was thus set to start at temperatures down to 5°C .

To realize this goal, the Pianta is equipped with a “Vaporizer.” Piping is positioned between the exhaust pipe and muffler, utilizing exhaust gas heat to efficiently facilitate fuel vaporization within the pipes.

With the Pianta, fuel vaporization is handled by the exhaust-warmed Vaporizer before the regulator’s temperature approaches 0°C , allowing consistent starting and operation of the engine at an outdoor temperature as low as 5°C . 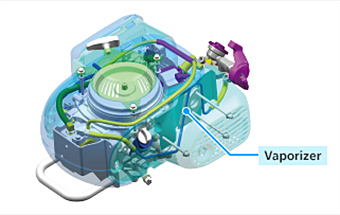